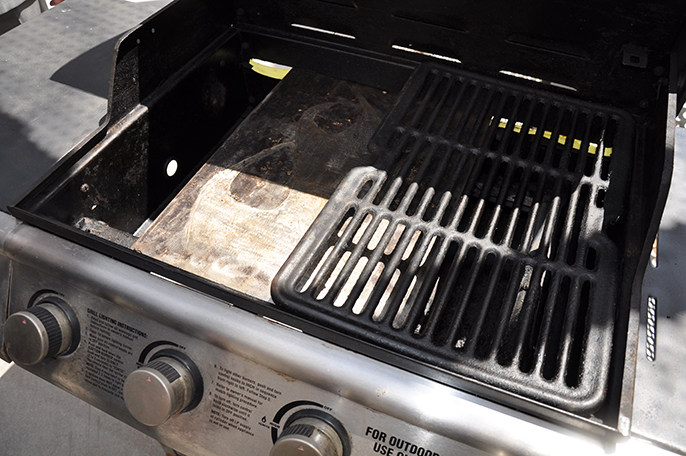 The tray designed by students installed underneath a grill's grates.

A team of University of California, Riverside Bourns College of Engineering students have designed a tray that when placed under the grates of a backyard grill reduces by 70 percent the level of a harmful pollutant produced during cooking.

The one-eighth inch thick steel carbon plate with an insulated handle can be installed in grills currently owned by cutting a slit into the grill to allow the plate to slide in and out. The idea could also be adopted by grill manufacturers who could sell new grills with the plate already installed.

“This is a simple solution that is also quite effective,” said Dennis Nguyen, one of the team members. “We designed this with implementation in mind. So, it is cost-effective, easy to install and easy to operate.”

The students – Nguyen, Greg Brinley, Elizabeth Mende, Kyle Russell and Justin Tao, all of whom just graduated – won a phase one grant of $15,000 as part of the EPA’s P3 (People, Prosperity and the Planet) competition. Next year a new group of students will take over the project and compete for a $90,000 phase two grant.

The students were advised by Kawai Tam, a lecturer at the Bourns College of Engineering, and David Cocker, a professor of chemical and environmental engineering. They conducted their research in the cooking emissions lab at UC Riverside’s Center for Environmental Research and Technology.

The 70 percent reduction is of particulate matter of less than 2.5 microns (PM2.5), or 1/30th the diameter of a human hair. Particulate matter that size include harmful toxins such as sulfates, nitrates and carbon oxides that are hazardous to the health of people because of their ability to enter the lungs with ease.

PM2.5 from grilling is becoming a more prominent issue. An executive officer for South Coast Air Quality Management District, an air pollution control agency for all of Orange County and the urban portions of Los Angeles, Riverside and San Bernardino counties, has stated that charbroiling is the largest source of directly emitted particle pollution in the region.

Previous research has indicated that 31,000 restaurants in Los Angeles discharge 11.6 tons of particulate matter pollution from meat cooking daily. Another study found that meat cooking could constitute as much as 21 percent of the PM2.5 in Los Angeles.

The primary source of PM2.5 during grilling occurs when grease droplets from food come in contact with an open flame.

The students design targets the primary issue of grease combustion by directing the grease away from the flame and drawing untreated air through a filter to decrease PM2.5 emissions that are produced.

“Other companies are focused on removing the smoke,” Russell said. “We thought why not prevent the smoke from ever happening.”