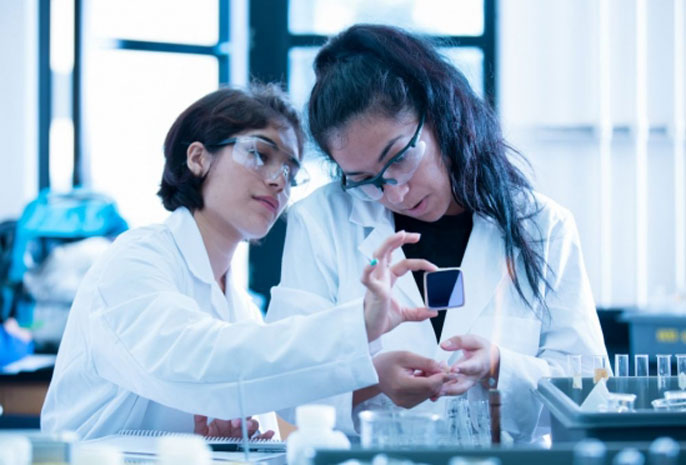 Sharon Tettegah has spent a good chunk of her career advocating for greater diversity in Science, Technology, Engineering and Math (STEM) fields. A professor in UC Santa Barbara’s Department of Black Studies and director of the campus’s Center for Black Studies Research (CBSR), she’s at the center of three national initiatives that aim to benefit faculty and students alike.

Among them are the Aspire: The National Alliance for Inclusive & Diverse STEM Faculty program; the Neuro-Computational Center established with Kenneth S. Kosik, the campus’s Harriman Professor of Neuroscience; and, with computer science professor Timothy Sherwood, a Google AI Award for Inclusion Research.

“Diversity and excellence have always been cornerstones of our UC Santa Barbara community, and the past year has brought heightened reflection and action on issues of equity and justice across our campus,” said UC Santa Barbara Chancellor Henry T. Yang. “We praise professor Tettegah for her critical leadership in spearheading these important academic initiatives, and for the knowledge and expertise she brings to advancing diversity and inclusion among our STEM fields. Such paramount efforts are collaborative, and we are grateful to all of our colleagues who are working alongside professor Tettegah to diversify and enhance programs across the disciplines.”

“UC Santa Barbara is committed to creating a community of students, faculty and staff that embraces the rich cultural, racial, geographic, economic and social diversity of the state of California,” Tettegah said. “We are continually striving to maintain a diverse academic community through the recruitment and academic preparation of academically qualified students, and through the recruitment and retention of outstanding faculty and staff.”

In the first initiative, UC Santa Barbara joined 18 other universities across the nation in a three-year effort to develop inclusive faculty recruitment, hiring and retention practices. The Aspire: The National Alliance for Inclusive & Diverse STEM Faculty program, led by the Association of Public and Land-grant Universities (APLU) and funded in part by the National Science Foundation, is intended to ensure inclusive teaching practices in STEM and that institutions increase the diversity of their STEM faculty.

“I think it’s really important to in these times to address some of these issues,” said Tettegah, who will be co-lead the initiative with Belinda Robnett, UC Santa Barbara’s executive vice chancellor for diversity, equity and inclusion. We are excited to be a member of the iChange initiative. We feel very honored to join 18 other institutions.”

As part of the Institutional Change Initiative (IChange), UC Santa Barbara will perform a comprehensive self-assessment of current practices and assets. It will then develop and implement plans to bring about change across all of its STEM programs.

As Tettegah noted, IChange is a comprehensive program that involves the contributions of many key faculty and administrators across the campus. Given the university’s goals for the program, cooperation at all levels is vital, she said.

In its application to the Aspire Alliance, UC Santa Barbara identified the three main goals it would pursue:

UC Santa Barbara is part of the third cohort to join the Aspire Alliance, bringing the total number of institutions participating in the institutional change effort to 54. The National Science Foundation funds the effort as part of its INCLUDES (Inclusion Across the Nation of Communities of Learners of Underrepresented Discoverers in Engineering and Science) initiative.

Tettegah has teamed with Kenneth S. Kosik, Harriman Professor of Neuroscience in UC Santa Barbara’s Department of Molecular, Cellular and Developmental Biology, to establish the Neuro-Computational Center in the CSBR. The center is being supported by a $100,000 grant Kosik obtained from the Hearst Foundation.

In their proposal to establish the center, Kosik and Tettegah noted that while neurocomputation has become “a fundamental skill and investigative tool for gaining insights in many disciplines,” UC Santa Barbara has lagged behind comparable universities in the field. What’s more, they said, black students aren’t represented in the “and express a very high bar to entry.”

The Neuro-Computational Center is intended bring Black students at UC Santa Barbara into the field of neurocomputation, which requires expertise in such diverse disciplines as statistics, programming, computer science, linguistics as well as molecular cellular and cognitive neuroscience.

In a letter of support from Kosik and Spencer LaVere Smith, associate professor of electrical and computer engineering, the co-directors of the UC Santa Barbara Brain Initiative said the center “will cultivate a talent pool in the black community to repair the current demographic skew among graduate students and beyond.”

Tettegah has already reached out to scholars in the field to serve as mentors. Members of one group, Black in Neuro, are already on board.

“We’re trying to bring in people that the students are going to feel comfortable with,” she said, “people that understand the epistemology or a epistemological approach to engage them in ways where they don’t feel like they’ve been marginalized or put down. That’s the whole idea behind it.”

Tettegah and co-PI Timothy Sherwood, a UC Santa Barbara professor of computer science, were awarded a 2020 Award for Inclusion Research from Google AI. Their proposal, “Iterative Design of a Black Studies Research Computing Initiative Through ‘Flipped Research,’ ” was one of 16 chosen from more than 100 applications from universities around the world.

The award, which comes with a one-year grant of $60,000, will help establish collaboration of UC Santa Barbara’s Department of Computer Science and the CBSR. At its core, the collaboration is aimed at bringing the power of computational science to underserved Black and Latino student populations.

The “flipped research” model, Sherwood and Tettegah wrote in their proposal, is intended to put “student scholars in the position of identifying and refining computing research topics that connect directly to their lived experiences and then proposing those ideas for topics of research by the broader community. Student teams, working through an iterative design process with faculty and graduate student mentors, will work to refine their broader research questions into a form similar to a traditional call for proposals (CFP). These CFPs can then be shared publicly and/or presented in person to interested program managers and industry leaders to inform their future research investment.”

The interdisciplinary computing research, they said, would bridges Black Studies and Computer Science to create a new and student-driven foundation for understanding issues of personal significance through a diverse lens.