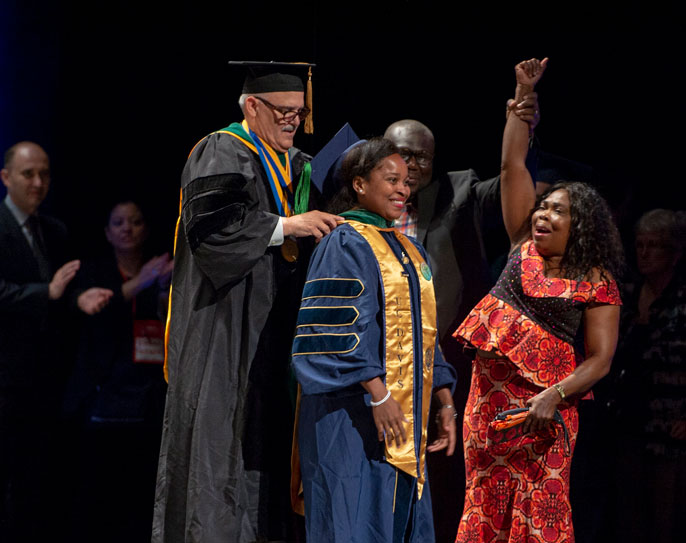 Lucy Ogbu-Nwobodo shares a triumphant moment with her mother May 18 as Dr. Frank Sousa, assistant dean at UC Davis medical school, bestows the hood designating her as a doctor of medicine.

Many would consider Lucy Ogbu-Nwobodo’s story as one of uncommon hardship. She sees it as one of extraordinary luck.

“Mine is a Cinderella story. But with many more fairy godmothers,” she says.

As an adolescent, Ogbu-Nwobodo came to the U.S. from Nigeria, in hopes of pursuing an education and becoming a doctor. She imagined a life of opportunity and comfort. Instead, she endured years of maltreatment and exploitation at the hands of her host family. On the cusp of escaping to college, she discovered one night that they had never processed her immigration papers. With no legal status, her college dream evaporated.

Now, 16 years after graduating high school at the top of her class, the newly-minted M.D. is heading to a residency at Harvard and Massachusetts General Hospital, with plans to practice psychiatry for the poor and underserved.

“The thing that really saved me is that I had so many people who helped me. Teachers who took an interest in me, people who knew my story and became my mentors and advocates.”

Many of those people were there to cheer her on this spring as the UC Davis medical school graduate realized her long-held dream.

Among them: her French teacher from high school, faculty and fellow students from Cal State, friends since middle and high school, and her mother and brothers, who had come from Nigeria to see her. The crowd also included members of her UC Davis family, mentors and mentees alike.

“It has been an almost out-of-body experience, to have this moment finally here,” she said.

‘School was my refuge’

Ogbu-Nwobodo, now 31, grew up one of seven children, in a rural village in southeastern Nigeria, where education and opportunity were scarce.

“When you live in a place like that, where you don’t even know a doctor, you see what can happen when people lack access to even the most basic medical care,” she said.

It was that awareness, from an early age, that fueled the precocious youngster’s ambition to become a doctor, and led her family to urge the 11-year-old to join some extended family members in immigrating to the U.S.

The reality when she arrived, however, was far different than what she expected. The East Oakland neighborhood she lived in was rife with poverty and gang violence, and “surprisingly similar” to the hopelessness she’d known in Nigeria. The relatives she lived with “weren’t very nice people,” she said. They put her to work as the household maid and told her she wouldn’t amount to anything. At school, she was teased about her accent.

But still, Ogbu-Nwobodo held tight to her dream of becoming a doctor.

“School was the one place where all of the bars were even,” she said. “By studying and learning, I was able to transport myself to a place where I was just like everybody else.”

She studied in secret at night, keeping her academic achievements hidden from her family. By 15, she completed high school. She applied to college and received a raft of acceptance letters — including one from Harvard — with scholarship offers to boot.

Then, suddenly, everything she’d been striving for seemed lost. Her host family had failed to process her immigration paperwork. Without legal status, and no ID other than a library card, she was unable to accept any of her college offers and had no ability to work legally. She felt she had little option but to continue as the household drudge.

She lived in fear for a long time, she said, afraid that signing her name on the wrong document would place her ability to stay in the country at risk.

The journey toward a degree in neuroscience

Yet, when she talks of that time, Ogbu-Nwobodo focuses not on the hardships, but on the strokes of luck and kindness that led her to where she is now.

“There are so many amazing people out there, and they make stories like mine possible.”

One of those was a high school teacher who ran into Ogbu-Nwobodo and was dismayed to discover her star pupil not going to college.

The teacher urged her to check out Cal State East Bay. Ogbu-Nwobodo attended an information session, during which officials took one look at her transcript, gave her a provisional ID, and enrolled her on the spot. Ogbu-Nwobodo baked cookies to help pay her tuition.

She now believes the detour was destiny.

At Cal State, she discovered her fascination with neurology. “It is this incredibly intricate and complex system in our heads that we walk around with,” she said. “Don’t get me started on the brain or I’ll never stop talking about it!”

It’s also where she took an undergraduate internship at Highland Hospital in Oakland. As an emergency room aide, she witnessed first-hand the health problems people face as a result of inadequate access to care.

“Someone comes in with a brain tumor the size of a baseball, and he’s had headaches for 10 years but never had the money to see a doctor,” she said. “It fills you with a sense of injustice that you feel you have to do something about.”

Helping others live her dream

She petitioned school and hospital officials to establish an internship for pre-health students that would enable them to observe during surgery.

Called Operating Room Experiences, the program selects 15 students out of roughly 200 applicants to serve a year-long volunteer internship at the hospital and be trained in operating room procedures. One day a month, participants join the head physician for a lecture and morning rounds before being invited into the operating room to watch the procedure.

“If we want to broaden the sphere of who gets into medical school, we have to give students from diverse backgrounds opportunities to see how surgery is done, so that it can inform their path.”

More than 60 of the program’s participants have gone on to medical or other health professional schools.

But for several years, it looked like Ogbu-Nwobodo wouldn’t be among them.

Despite her many achievements, there was no way at that time for an undocumented student to enroll in, much less pay for, medical school.

So she mentored her fellow students, helping them to study for MCATs and complete their applications, and cheering them along the way.

“All the things I couldn’t do myself, I helped other people to do,” she said. “I felt like if I could help them make their dreams come true, I could live through them — and society would be better off too.”

While she was helping others, a dedicated group of people from Cal State, Highland and UC Davis were lobbying on her behalf. They worked with her to get an immigration attorney and provide testimony and support that enabled her to qualify for legal residency. On December 22, 2015, she became a U.S. citizen.

She went on to earn a master’s degree in neuroscience from Cal State, and enrolled at UC Davis medical school in 2013.

A home and a family at UC Davis

At UC Davis, Ogbu-Nwobodo has worked to to expand access to health care and to encourage more underrepresented minority students to pursue careers as health professionals.

She served as co-director of the Imani Clinic, which provides basic healthcare services to residents of Sacramento’s Oak Park community, and taught an undergraduate health education course. A National Institutes of Health fellowship enabled her to do neurosurgery research to improve cognitive function for patients with epilepsy. She was the first UC Davis student to receive the prestigious Paul and Daisy Soros fellowship.

“UC Davis has been my family. People at this institution have taken me in and raised me as their own. To have not just a wonderful education but a supportive family unit, it’s priceless,” she said.

“Asking me to choose my most memorable experience is like asking me to pick my favorite star in the sky,” she said. One she remembers especially fondly is the medical school’s induction ceremony, with bagpipes playing as incoming students received their white coats.

Those same bagpipes were playing last month as she was awarded her M.D..

“Seeing my family and friends in the audience, and so many people who have been invaluable to my journey — to have them all in the same space, and thinking back on all it took — it was just such a momentous occasion.”