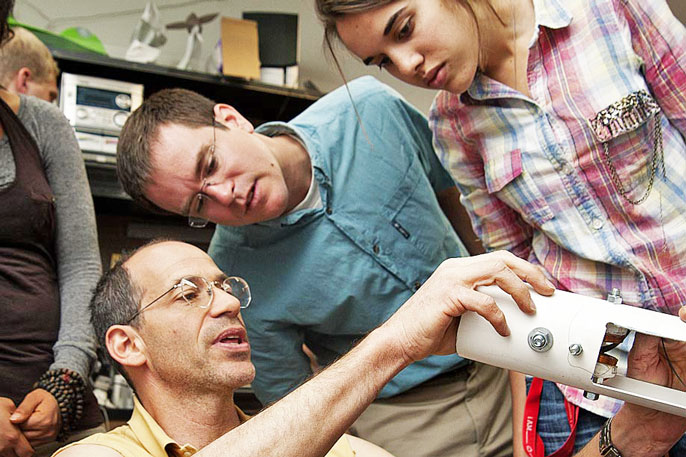 To underscore the urgency of the situation, scientists studying climate change are increasingly adopting combative language. We’re "attacking," we’re "fighting" and frequently "tackling" climate change head-on. Noted environmentalist Bill McKibben recently described climate change as a war — a real war, and one that we’re losing. If we’re at war, where are the climate warriors?

The University of California is stepping up to fill that void, with faculty in fields from Swahili to music creating new course material to expose students — especially non-science majors — to important climate change and sustainability concepts.

“For people that see it as a passion, there are any number of student groups and classes that touch on sustainability and climate,” said academic director of the UCLA Institute of the Environment and Sustainability Cully Nordby. “But how much is getting across to the majority of students for whom this isn’t a passion? Right now, not much.”

Nordby and others decided that needed to change. In spring of 2016, as part of the university’s Carbon Neutrality Initiative, they held a series of climate curriculum workshops, aimed at faculty who don’t normally deal with climate science in their classes, to help them develop new course material that incorporates climate change and sustainability into existing courses.

The attendees of the workshops came from every imaginable field, representing over 160 different academic units across the university. In all, 228 faculty members participated.

With the first new course modules rolling out now, the numbers speak for themselves: 228 instructors with an average of 50 students per class could reach more than 11,000 students every year, many of whom would never have been exposed to this material otherwise. And this is just round one.

“As a university, we strive to educate globally responsible citizens,” said Nordby. “This is a way to get beyond the choir and speak to new people.”

In 2011, UCLA ran a similar workshop for faculty on the campus. Not only was it well received, Nordby realized that it could be scaled up quickly and have a much broader impact. To replicate the success across the system, she needed two volunteer leaders from each of the 10 UC campuses.

“People were skeptical at first that it would work; we’d never get two people at each campus. Well, we did,” said Nordby.

In fact, she did one better: in addition to the 10 UC campuses, the university’s Division of Agriculture and Natural Resources joined in to hold a curriculum workshop as well.

The workshops, built on a model championed by the Association for the Advancement of Sustainability in Higher Education (AASHE), gave professors who were interested in adding climate content to their courses a place to learn, share ideas and find the resources to make it happen.

“The key is that the faculty decide what material is relevant to their courses — we simply provide tools, space and ways to think about climate change in different contexts.”

The fact that so many faculty were interested may reflect the growing awareness that climate change will be the coming generation’s greatest challenge. Faculty members are feeling the pressure to prepare all students for a new reality — not just science students.

Heal the planet, heal the people

In the health sciences, incorporating climate change into the curriculum has become a necessity. A warming climate is having a broad range of public health impacts, including air pollution, changing disease diffusion patterns, heat exposure and more — and these effects are only expected to increase in the coming decades.

“Learners in the health professions tend to be busier than undergrad students. Health professions students have a pretty intense curriculum that they have to follow,” said Teherani. “A lot of professors have expressed interest in incorporating more about climate change and health into their courses, but didn’t know how to go about doing it.”

Teherani and colleagues at UCSF helped usher in a core lecture for all first-year medical students, plus a new elective on climate and health. The pharmacy program is planning to incorporate more training on sustainability and waste related to the medicines and products used in their fields.

“Climate has also become a big part of the discussion around medical ethics and social accountability: the world, including disadvantaged populations, will experience the impacts of climate change on health,” said Teherani.

One of the challenges with climate change is that many of its effects are delayed: not only will the greenhouse gas emissions of today affect us long into the future, the work we do today to combat climate change won’t always yield immediate benefits, and in many cases it will benefit someone else.

UC Davis’s Sam Nichols, who teaches a class in the music department where students make their own electronic instruments, wants to engage his students in a conversation on these issues. Because the class is hands-on, so is his approach.

“The space we inhabit — the Sound Lab — is an old warehouse space, and not very energy efficient,” said Nichols.

Nichols is asking his students to help devise solutions.

“I want the students to think about how we can redesign the space to improve the energy efficiency, realizing that much of the benefit will come to later students. It’s an immediate modeling of a much larger problem,” said Nichols.

At a smaller, more personal scale, Nichols is helping students incorporate sustainable thinking into the instruments they design.

“Unless you’re using a bike-powered synthesizer, you’re mining lithium for a battery at the very least,” said Nichols.

Speaking the language of climate change

By 2030, the famed snows of Kilimanjaro, the glaciers on Africa’s tallest mountain, may completely disappear. In Tanzania and neighboring Kenya this is a topic of concern, a sign of a changing climate. Now students of Swahili at UC Berkeley are picking up the discussion, too.

For UC Berkeley African studies lecturer David Kyeu, including climate change as part of the Swahili language curriculum was a natural fit.

“What is going on where the language is spoken? We live in a global village. The climate is threatened not just in the US — it is a worldwide phenomenon.”

Other language faculty members were equally keen to adopt the new material. Using current, real-world issues, from China’s smog problems to rainforest destruction in Brazil, helps students learn the vocabulary and the cultural context. Kyeu’s Swahili students at UC Berkeley are now told on the syllabus that they will need to “understand and explain how global warming is affecting the region, e.g., the melting of glaciers on Mount Kilimanjaro” and be able to write a report on the topic in Swahili.

“This lets students compare situations in other countries with their own surroundings. What is happening on Mount Kilimanjaro and how does that compare with California? Now they have a way to talk about it.”