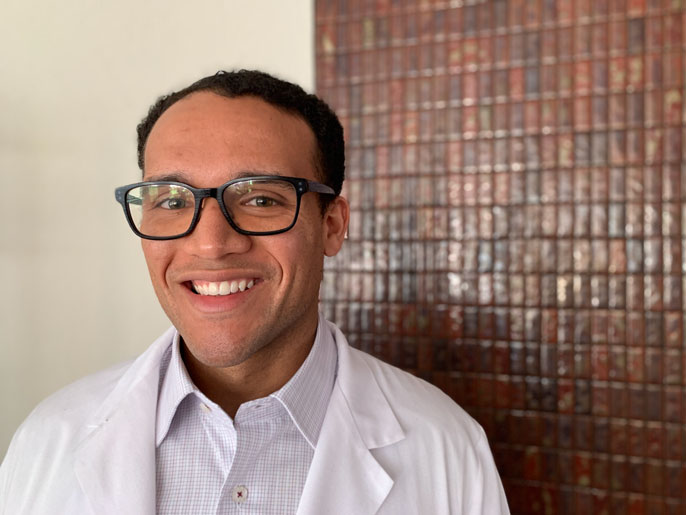 While he hasn't yet completed his medical training, Chris Johnson can support those who can.

Coloring, reading and playing make-believe are not exactly the ways third-year medical school student Christopher Johnson had envisioned himself helping during a health crisis.

But with schools and day care centers shuttered, Johnson is doing his part to battle COVID-19: caring for two-year-old Adi while his mom, a UC San Francisco infectious disease specialist, goes to work to combat the disease.

“There are all these things that are disrupted, and that need to happen so health care providers can show up and do their jobs,” said Johnson, who helped raise two younger siblings. “This felt like a way I could contribute.”

With clinical rotations suspended and many aspects of their training on pause, medical students like Johnson have found themselves temporarily sitting on the sidelines as their more experienced colleagues go to work to fight the disease directly.

So they’ve found other — equally vital — ways to be of service.

Third-year UCLA medical student Priyanka Naik has been assisting neighbors with various errands, such as going on a toilet paper run for a resident who has cancer and is unable to go out during the pandemic.

“It’s rewarding to see the impact on the patients of just doing a simple task — it does show you can still make an impact in people’s lives, even though it isn’t the way I expected,” Naik said.

A Zimbabwe native who has been separated indefinitely from her family due to the pandemic, Naik had been taking online classes and feeling at a loss for how to help when she saw a flier seeking volunteers to run errands for elderly and sick people in the community.

Naik became such an enthusiastic volunteer that she’s now helping to run the project, called Westside Friends Group. Along with cooking meals and performing errands, the group has also raised funds to pay for food and other essentials for neighbors in need.

Johnson got his volunteer gig through UCSF COVID student aid, an effort to support those affected by the COVID-19 health crisis, both within the UCSF workforce and the broader community.

“We’re in a weird spot as medical students,” said Colleen McGourty, a fourth-year UCSF medical student who helped launch the group. Classes have moved to remote instruction. Meanwhile, some clinical rotations and other trainings are on pause, as non-essential procedures have been postponed and as schools determine how to safely incorporate students. “Everything is going crazy at the medical centers, and we’re stuck at home.”

In early March, McGourty put a call out seeking volunteers to help busy health care providers with tasks from babysitting to dog walking. Within a week, more than 275 UCSF students had signed up, not just from the medical school but from nursing, the pharmacy school, the graduate division and nearly every other section.

@UCSF @UCSFMedicine providers, if you're in need of support right now, my classmates and I are here to help you with childcare, errands, etc. We have a list of students willing to help out during #COVID19 response. Get in touch with me or another student if you need something! pic.twitter.com/TI7CSof9v4

The group has now paired volunteers with at least 35 health care workers who need a pair of helping hands. It also held a drive to collect personal protective equipment (PPE) that distributed more than 14,000 masks for local hospitals, and collected dozens of thank-you notes to doctors from grateful members of the community.

“Like so many of us, I came in with an inherent drive to serve. That’s what we’re taught in medical school: anything we can be doing to help, we should be doing. We’re all just trying to figure out the best way to do that,” McGourty said.

‘Knowing I’ll be there soon’

Across the UC system, members of the community are mobilizing to help in all kinds of ways. They have held donation drives for personal protective equipment, organized catered meals for health care providers, volunteered for blood drives and to deliver Meals on Wheels, and stepped up to produce masks and other vital equipment.

For students aiming to be medical professionals, however, the crisis carries a particular significance.

Take Alex Beagle, who is just weeks away from completing his M.D. and beginning his residency at UCSF in internal medicine.

From his window, Beagle can see the hospital’s Parnassus campus, where he knows his colleagues and mentors are working to battle the mounting pandemic. It’s a battle Beagle will soon be drawn into. He begins his residency at the hospital in June, where he will likely be treating COVID-19 patients.

But for now, the best thing Beagle can do is run errands, like pick up prescription medicine for a health care worker who is seeing patients by Zoom while in quarantine after suspected exposure to the coronavirus.

“It’s been a little eerie looking over at the hospital, and knowing it’s becoming more and more intense — and also knowing I’ll be there soon,” he said.

UC medical and professional programs are looking for ways to allow students to serve as volunteers in roles that don’t require medical training.

In the coming weeks, more than 700 new UC medical school graduates will be starting their medical residencies, where many will find themselves stepping into their new roles amid an unprecedented health care crisis.

When they officially don their white coats, many students say they will do so with a firmer commitment than ever to their chosen profession.

In the meantime, though, they are more than happy to pick up groceries and prescription meds, whip up lasagna, or engage kids with Legos and craft projects — whatever it takes to make it easier for their colleagues and mentors to go to work saving lives.

“I feel in awe of my teachers, and the doctors and nurses and respiratory therapists who are responding to this crisis,” McGourty said. “I hope I can be as brave as all of them. I feel humbled to be part of a profession where people are doing and giving so much.”