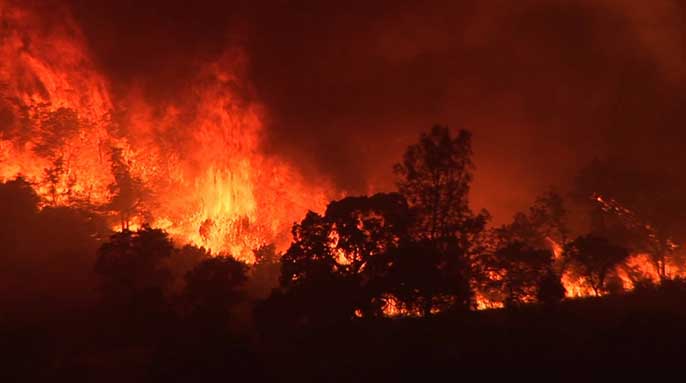 Many fire scientists have tried to get Smokey the Bear to hang up his “prevention” motto in favor of tools like thinning and prescribed burns, which can manage the severity of wildfires while allowing them to play their natural role in certain ecosystems.

But a new international research review says the debate over fuel-reduction techniques is only a small part of a much larger fire problem that will make society increasingly vulnerable to catastrophic losses unless it changes its fundamental approach from fighting fire to coexisting with fire as a natural process.

The paper, “Learning to Coexist with Wildfire,” to be published in the Nov. 6 issue of the journal Nature, examines research findings from three continents and from both the natural and social sciences. The authors conclude that government-sponsored firefighting and land-use policies actually encourage development on inherently hazardous landscapes, amplifying human losses over time.

“We don’t try to ‘fight’ earthquakes — we anticipate them in the way we plan communities, build buildings and prepare for emergencies. We don’t think that way about fire, but our review indicates that we should,” said lead author Max Moritz, Cooperative Extension specialist in fire at UC Berkeley’s College of Natural Resources and an associate at UC Santa Barbara’s National Center for Ecological Analysis and Synthesis (NCEAS). “Human losses will only be mitigated when land-use planning takes fire hazards into account in the same manner as other natural hazards, like floods, hurricanes and earthquakes.”

The analysis looked at different kinds of natural fires, what drives them in various ecosystems, the ways public response to fire can differ, and the critical interface zones between built communities and natural landscapes. The authors found infinite variations on how these factors can come together.

“It quickly became clear that generic one-size-fits-all solutions to wildfire problems do not exist,” Moritz said. “Fuel reduction may be a useful strategy for specific places, like California’s dry conifer forests, but when we zoomed out and looked at fire-prone regions throughout the western United States, Australia and the Mediterranean basin, we realized that over vast parts of the world, a much more nuanced strategy of planning for coexistence with fire is needed.”

If humans choose to live in fire-prone regions, fire must be managed on par with other naturally occurring hazards, the authors argue, and research must seek to understand what factors and outcomes humans can and cannot affect.

One common tool is applicable to the vast array of ecological and social science interactions at the critical wildfire/urban interface: more effective land-use planning, along with the regulations that guide it.

The authors recommend prioritizing location-specific approaches to improve development and safety in fire-prone areas, including:

As an example of positive steps, the report cites new fire-danger mapping efforts, including an existing fire hazard severity zone map that guides building codes in California. Produced by the state’s Department of Forestry and Fire Protection, the current map does not explicitly incorporate locally varying wind patterns, which influence the worst fire-related losses of homes and lives, but future iterations will include these data.

“Wildfires are a natural part of many ecosystems and can have a positive long-term influence on the landscape, despite people labeling them as disasters,” said co-author Dennis Odion, an associate project scientist at UC Santa Barbara's Earth Research Institute. “They can often stimulate vegetation regeneration, promote a diversity of vegetation types as the intensity of fires varies, provide habitat for many species and sustain other ecosystem services, such as nutrient cycling. However, where exotic species are invading, fires may be harmful, so there is a need for site-specific analyses.”

Odion is the lead author of a PLOS ONE paper published earlier this year that examined the frequency, size, seasonality, impacts and other characteristics of naturally occurring fires in Ponderosa pine and mixed-conifer forests of western North America. The findings show that prior to settlement and fire exclusion — the elimination of all types of wildland fire from a specified area — these forests historically exhibited much greater structural and successional diversity as a result of fires burning with complex patterns of intensity.

“This is often the byproduct of weather patterns as we see in modern wildfires,” Odion said. “This can limit the effectiveness of fuel treatments and is one reason why the kind of coexistence strategies described in this just-published paper are needed.”

The authors underscore that wildfires are a natural part of many ecosystems and can have a positive long-term influence on the landscape, despite people labeling them as “disasters.” They can stimulate vegetation regeneration, promote a diversity of vegetation types, provide habitat for many species and sustain other ecosystem services, such as nutrient cycling.

Around the world, the numbers, sizes, and intensities of fires vary greatly. In some ecosystems, big, severe wildfires are natural events and more climate-driven — by drought or high winds — so fuel reduction is not a very effective tool in these locations. By contrast, many ecosystems that would naturally experience frequent lower-severity fires may respond to vegetation management aimed at both reducing fire hazard to humans and restoring crucial ecosystem processes. But, the authors agree, where fuel reduction is an appropriate goal, it would ideally be achieved by letting wildfires do their job.

“How should future fire patterns compare to this historical variability? That’s the big question,” Moritz said.

Describing wildfire as “one of the most basic and ongoing natural processes on Earth,” the authors call for a paradigm shift in the way society interacts with it, changing to an approach that achieves long-term, sustainable coexistence that benefits the planet’s ecosystems on the landscape scale, while minimizing catastrophic losses on the human scale.

“A different view of wildfire is urgently needed,” said Moritz. “We must accept wildfire as a crucial and inevitable natural process on many landscapes. There is no alternative. The path we are on will lead to a deepening of our fire-related problems worldwide, which will only become worse as the climate changes.”