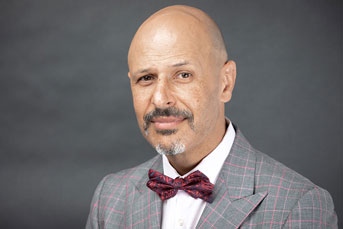 Comedian Maz Jobrani was on an episode of the Science of Happiness, a podcast by UC Berkeley’s Greater Good Science Center.

Growing up in an immigrant family, comedian Maz Jobrani knew his parents wanted him to be a lawyer or doctor, maybe an engineer. When he became a comedian, he says, the whole community was sad for the family. “They were like, ‘Did you hear about Jobrani’s son? Yeah, it’s a shame. He’s almost a drug dealer.'”

“The reason I called my recent special Immigrant was because “immigrant” under Trump had turned into a bad word. It was a derogatory term. And really, people that grasped onto that xenophobia, it broke my heart because I look around — first of all, I’m an immigrant. And then I look around and I know a lot of really good people that are immigrants, and then I’m looking at people like the Syrian refugees who are trying to come to America and flee hardship or the people come from Central America and I go, ‘These people are leaving a really bad situation.’ No one’s in a great situation is going, ‘Oh we know the economy is great, there’s no violence in our country — let’s go somewhere where we don’t speak the language and we’re not wanted and see how it will go.’ No.”

“That’s so true, Maz,” says Keltner. “You know, what really strikes me about the immigrants who I am friends with and who I work with is not only their perseverance, but their ability to stay focused on the brighter side of human nature in spite of the rise of white supremacy and xenophobia in our country today.”

When Jobrani got the assignment, he was on vacation with his wife and two kids in Japan, so the whole family participated. Each day, they would take 10 minutes to write down three good things, then they’d read what they wrote aloud to each other. It’s something that Jobrani says encouraged them to look for positive things throughout the day.

“In Kyoto, we went to see what’s called the Bamboo Forest, which is this amazing magical forest of just bamboo trees and it’s just heavenly,” says Jobrani. “I lost my sister to breast cancer in 2017. But it was an interesting thing because being at this bamboo forest really kind of made me feel closer to her. So I’ll just read this quickly for you:

“‘Bamboo Forest — I’m not religious, but I believe in nature. When we got there, I was truly moved and overwhelmed at its beauty. It also made for some great pictures … It made me think of my sister, whom I miss a lot, but it made me feel closer to her. It was just a very peaceful place. And it was especially nice to experience it with my family. It was very cool in the evening, but a nice cool. I kept saying it felt like one of the wonders of the world.’ That’s mine.”

Subscribe to Berkeley Talks, a Berkeley News podcast that features lectures and conversations at UC Berkeley.

Listen to more episodes of Science of Happiness.