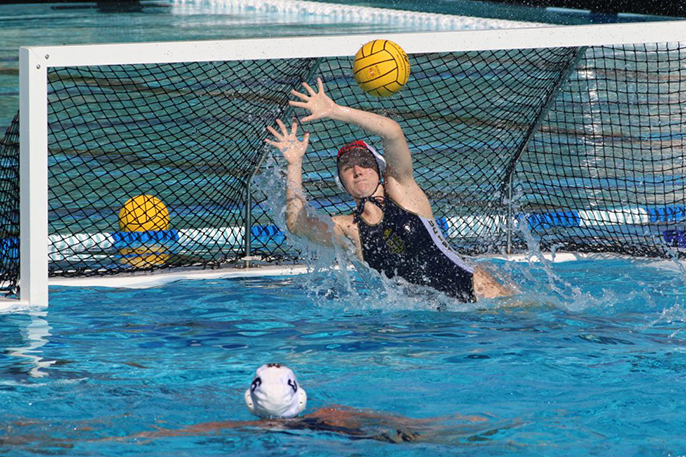 A first-of-its-kind survey has confirmed what some water polo players – especially goalies – have long suspected: Concussions seem to be prevalent in the sport.

More than a third of water polo participants reported sustaining a concussion either during games or in practice, according to a poll conducted by UC Irvine researchers.

Study leaders said the findings represent a necessary and important initial step toward understanding the prevalence of concussions in water polo and point to the need for increased player safety. While the sport features a high degree of physicality and aggressive play, epidemiological data on the incidence of head trauma have not been gathered or made public until now. Results appear online in Frontiers in Neurology.

Dr. Steven L. Small and James Hicks with the Department of Neurology and UC Irvine’s Exercise Medicine & Sport Sciences Initiative polled more than 44,000 USA Water Polo members, asking about concussions, head impacts and symptoms commonly associated with concussion. More than 1,500 completed surveys were received. Thirty-six percent of respondents (30.8 percent of males and 43.5 percent of females) reported at least one concussion during water polo play, with an average of 2.14 concussions per person.

Among player positions, goalies logged the highest rate of head injury. Forty-seven percent said they’d suffered at least one concussion, with an average of 2.49 concussions per person. A majority of these head traumas occurred during practice rather than games, when defensive players are present and interposed between offensive players and goalies.

“These numbers suggest that playing water polo carries a significant risk of concussion,” said Small, professor and chair of neurology at UC Irvine. “Our results speak to the need for systematic concussion reporting in water polo. Particularly important is reporting for individuals at the college level, who have the highest prevalence of concussion.”

He observed that goalies seem to be at a disproportionate risk for concussion compared to other positions. Since the surveyed goalies indicated that most head impacts occur in practice, wearing greater head protection during this vulnerable period might be of enormous neurological benefit, Small said, adding that doing so would have no adverse consequences in the competitive environment.

“We found that concussions are not uncommon in water polo and that level of play, field position and gender are critical factors in determining the risk of concussion in the sport,” said Hicks, professor of ecology & evolutionary biology at UC Irvine and director of the Exercise Medicine & Sport Sciences Initiative. “As the first epidemiological examination of head trauma in water polo, our study calls attention to the need for further research.”

He and his colleagues noted several important study limitations that must be considered in follow-up work. First, fewer than 4 percent of the estimated water polo players in the U.S. responded, so the authors cannot claim that the data collected is representative of all water polo players – especially since the sport is more popular in other parts of the world. Second, given that the survey was internet-based and relied on participants’ memory of events and, to some extent, their subjective definition of concussion, the possibility of systemic bias or the over-reporting of concussions cannot be ruled out.

In recent years, there has been growing awareness of the risks of head injury in athletics, and understanding the nature and prevalence of sports-related concussion is a major focus of both clinical and basic research. In 2012, the NCAA began tracking water polo concussions, but only a handful of teams supply data, and the results haven’t been made public.