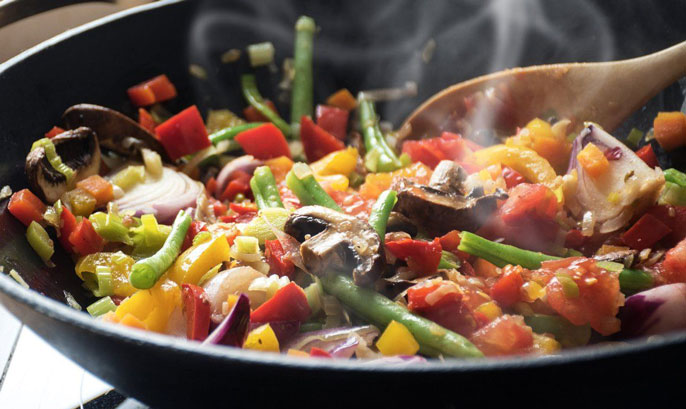 Scientists at UC San Francisco and Harvard University have shown for the first time that cooking food fundamentally alters the microbiomes of both mice and humans, a finding with implications both for optimizing our microbial health and for understanding how cooking may have altered the evolution of our microbiomes during human prehistory.

In recent years, scientists have discovered that many facets of human health — ranging from chronic inflammation to weight gain — are strongly influenced by the ecological health of the vast numbers of microbes that live in and on us, collectively known as our microbiome. This burgeoning field has sparked efforts at UCSF and across biomedical research to better understand how our environments and behavior can improve human health by shaping healthier microbiomes.

“Our lab and others have studied how different kinds of diet — such as vegetarian versus meat-based diets — impact the microbiome,” said study senior author Peter Turnbaugh, Ph.D., an associate professor of microbiology and immunology and a member of the executive leadership of the UCSF Benioff Center for Microbiome Medicine. “We were surprised to discover that no one had studied the fundamental question of how cooking itself alters the composition of the microbial ecosystems in our guts.”

The new study — published Sept. 30, 2019, in Nature Microbiology — represents a seven-year collaboration between Turnbaugh and Harvard evolutionary biologist Rachel Carmody, Ph.D., which began when Turnbaugh was an independent Bauer fellow and Carmody a graduate student at Harvard.

The researchers examined the impact of cooking on the microbiomes of mice by feeding diets of raw meat, cooked meat, raw sweet potatoes, or cooked sweet potatoes to groups of animals — selected because prior data demonstrated that cooking alters the nutrients and other bioactive compounds in both meat and tubers.

To the researchers’ surprise, raw versus cooked meat had no discernible effect on the animals’ gut microbes. In contrast, raw and cooked sweet potatoes significantly altered the composition of the animals' microbiomes, as well as microbes’ patterns of gene activity and the biologically crucial metabolic products they produced. The researchers confirmed their findings using a more diverse array of vegetables, performing what Turnbaugh called a “mad scientist experiment" — feeding the mice an assortment of raw and cooked sweet potato, white potato, corn, peas, carrots, and beets.

The group attributed the microbial changes they saw to two key factors: cooked food allows the host to soak up more calories in the small intestine, leaving less for hungry microbes further down the gut; on the other hand, many raw foods contain potent antimicrobial compounds that appear to directly damage certain microbes.

“We were surprised to see that the differences were not only due to changing carbohydrate metabolism but also may be driven by the chemicals found in plants,” Turnbaugh said. “To me, this really highlights the importance of considering the other components of our diet and how they impact gut bacteria.”

In collaboration with colleagues at the U.S. Department of Energy’s Joint Genome Institute in Walnut Creek, Calif., Turnbaugh’s team performed a detailed analysis of the chemical changes that cooking produced in each plant they had fed to their mice, resulting in a short list of compounds that might explain how these diets may have impacted the animals’ microbiomes, a question they are currently analyzing further.

Among other observations, the researchers noted that raw diets caused mice to lose weight, and they wondered whether this resulted from the changes to their microbes. But when the team transplanted these altered microbiomes into mice living on a regular diet of mouse chow, normally fed animals instead put on extra fat, a seemingly paradoxical finding the researchers say they are still investigating.

Finally, to understand whether similar microbiome changes could be triggered in humans eating a raw or cooked diet, the team partnered with a Harvard graduate student who is also a professional chef to prepare appetizing and experimentally comparable raw and cooked menus for a small group of research participants. The participants tried each diet for three days each in random order, then submitted stool samples for researchers to analyze their microbiomes, which showed that these distinct diets significantly altered the research participants’ microbiomes.

“It was exciting to see that the impact of cooking we see in rodents is also relevant to humans, although interestingly, the specifics of how the microbiome was affected differed between the two species,” Turnbaugh said. “We’re very interested in doing larger and longer intervention and observational studies in humans to understand the impact of longer-term dietary changes.”

Understanding how diet impacts the microbiome has important implications for how our gut microbes influence weight gain and other aspects of human health, Turnbaugh said. The study also raises intriguing questions about how human-associated microbes have evolved over the millennia to adapt to our culinary culture, he said, and whether this could have important side effects for modern health.

Authors: Study lead author Rachel Carmody, Ph.D., is an assistant professor of human evolutionary biology at Harvard University. Study senior author Peter Turnbaugh, Ph.D., is an associate professor of microbiology and immunology at UCSF and a Chan Zuckerberg Biohub Investigator. Carmody and Turnbaugh are co-corresponding authors on the study.