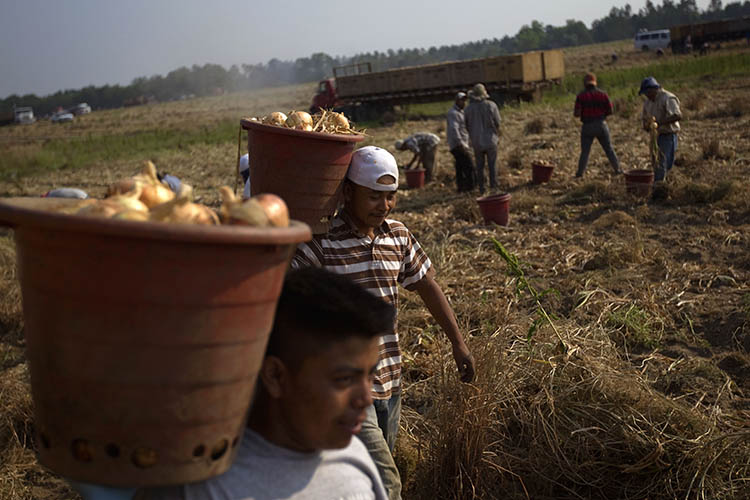 During a coronavirus-related shutdown, vulnerable workers, like these farm workers in Georgia, may have little or no access to sick pay or unemployment insurance and be faced with an impossible choice between their income and their health.

“One of the basic human needs is the need to belong, to have social connections.”

While health leaders and policymakers race to limit the spread of COVID-19, the emerging crisis is having a dramatic impact on millions of healthy Americans — in restaurants, offices, taxicabs, classrooms and other places where they work.

Seven counties in the San Francisco Bay Area issued a shelter-in-place order, effectively closing all non-essential enterprises. In the Bay Area and beyond, employees are being assigned to work remotely, using technology to stay connected to their work and co-workers.

But others — in restaurants and service industries, for example — have to be on the job in person. Those vulnerable workers may face slowdowns or shutdowns with little or no access to sick pay or unemployment insurance. Those who fall ill may be confronted with an impossible choice between their income and their health.

The workplace is a defining focus for many Americans, a place where they spend much of their lives earning an income, exercising creativity and connecting with colleagues and customers. This health emergency is sending shock waves across the working world, an impact with no precedent in modern times and no quick end in sight.

For those reasons, UC Berkeley experts said, an extended campaign against COVID-19 amounts to a vast experiment, undertaken in conditions of extreme uncertainty, that could bring temporary and permanent changes, large and small, to American working life.

Still, millions of workers are “absolutely nervous” about their income, their families and their health, she said. “They’re not making enough money to stay home, even if they got minimum wage for every hour that they’re off sick,” she explained. “It’s not enough to pay rent and bills.”

For white-collar workers, orders to work from home will raise a host of questions about motivation, productivity and the impact of isolation. But it may also inspire workplace innovation, said Clark Kellogg, a lecturer at the Haas School of Business.

“As it goes on longer and longer, there will be a rush to do workarounds,” Kellogg said. “When what we usually do doesn’t work anymore, we invent something new. And that innovation is usually done by line workers who just have to get the job done. They get out the proverbial baling wire and duct tape and make something happen.”

U.S. restaurant workers often have low pay and little or no paid sick leave, making them especially vulnerable to the COVID-19 crisis. (Image via Wikimedia Commons)

At many workplaces, the reality of the crisis has only begun to hit home in recent days, as the number of infections rises and health experts promote social distancing to slow the spread of the COVID-19 virus. This is forcing owners, managers and staff to fundamentally re-evaluate what works at work. And it has created a jarring new perspective on the gap between the working poor and workers in more secure positions.

Service workers are essential to the economy: They cook in restaurants, take care of our children, drive sick people to medical appointments and deliver food from farms to distributors. If they can’t they get sick, or if they are laid off, their families struggle, and so do their companies. If too many can’t work, the whole economy suffers.

Jayaraman said there are 14 million restaurant workers in the United States and another 10 million to 15 million in retail. “You’re talking about at least a third of the working population,” she said. “That’s low-wage workers, working full-time and living in poverty.”

Many are working poor, some holding down two jobs. In California, they have at least three sick days, but in other states they may have none. Often they lack health insurance. They can’t afford to be sick, and if they are, they often go to work anyway. But if they’re cooking or providing childcare while ill, they risk transmitting illness.

In a March 10 op-ed in the Washington Post, Rothstein and co-author Jared Bernstein warned that “avoidance, social distancing and panic may have enormous economic consequences,” especially for low-income workers. They proposed a solution: a temporary program under which employers would continue to pay idled employees, with reimbursement from the federal government.

Days after the op-ed was published, the U.S. House of Representatives passed a coronavirus-response measure that Rothstein described as “very similar” to what he and Bernstein proposed. It would provide two weeks of paid leave to people who get sick or quarantined, and to those caring for a sick family member or for kids whose schools are closed. If that runs out, the measure would pay up to three months of family or medical leave. Employers would pay those benefits, but would be reimbursed by the government. The U.S. Senate is expected to consider the bill as early as this week.

Jayaraman urged even broader support for low-wage workers. Paid sick leave and long-term disability leave will be essential to get through the crisis, she said. But such workers also need higher wages and health insurance, to assure that they can stay home and get care if they get ill.

“This crisis should tell us that it doesn’t work to have some people with access (to health care) and some people who don’t,” she said.

Many white-collar workers, like this New York woman, are being asked to do their jobs from home, which raises questions about motivation, productivity and the impact of isolation. (AP photo by Bebeto Matthews)

Navigating risk in a white-collar world

For workers in technology and communication fields, the idea of working remotely is well-established. But the coronavirus crisis forces further change, said Don A. Moore, the Lorraine Tyson Mitchell Chair in Leadership and Communication at Berkeley Haas.

Tools such as video conferencing are already in place to support the shift. But a basic question remains hard to assess: What will the impact be on productivity for individual employees, or whole workforces, when they’re suddenly moved to the digital realm?

“You can imagine that, for some jobs, that facilitates people’s productivity, but it undermines productivity in other ways,” said Moore. “Tech workplaces like Pixar, for instance, where its facilities (in Emeryville, California) were specifically designed to facilitate face-to-face interaction — that gets lost when people are collaborating online, each one working from the café or from home or the vacation spot where they’re most comfortable. … The magic of collaboration is sometimes lost.”

Isolation brings other risks, both to the employee and to the business or organization, said Cristina Banks, director of Berkeley’s Interdisciplinary Center for Healthy Workplaces.

“One of the basic human needs is the need to belong, to have social connections,” Banks said. “What we’ve done through social distancing is break those social connections and basically scattered people to the wind. … It could lead to people caring less about their connection to the institution.”

In Banks’ view, the leaders of a business or organization must respond with strategies to preserve connection and esprit de corps. “The operative principle here is certainty and predictability, making conscious efforts to connect people and maintain those connections,” she said. “Management just has to make it happen with great diligence, with great discipline.”

What if this lasts awhile?

Opinions are divided on the impact of extended social distancing. Experts predominantly believe that as governments act to restrict peoples’ movement, as they have in China and Italy, that might effectively slow the advance of COVID-19; others worry about the cost to businesses, workers and the larger economy. At Berkeley, some say that changes imposed by the crisis could spark lasting innovation.

This may be a black swan event; the future, even a few months away, is unpredictable. But Kellogg expressed a cautious hope for the innovation that arises from American workplaces. “How creatively can we think in responding to this?” he asked. “What opportunities does this hand us for thinking differently for teaching and for building communities of learning and living life?”