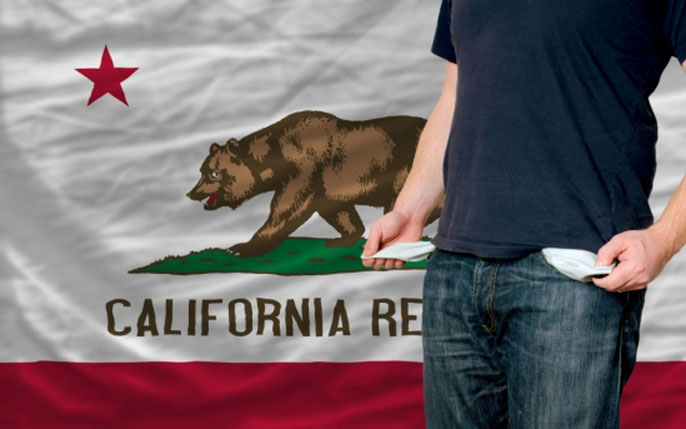 California, for so long a beacon of prosperity and fortune, is flagging in its ability to deliver on the promises that have attracted multitudes since the early 20th century. After decades of expansive growth, changes in priorities and governance have led to conditions that have become untenable for businesses and individuals, leading many to leave the Golden State, and causing others to reconsider their residency. On top of that, investment in the state’s infrastructure has been poor as the population has grown, leading to costlier measures down the line.

That was some perspective from Lee E. Ohanian, professor of economics at UCLA, senior fellow at the Hoover Institution at Stanford University, UC Santa Barbara alumnus and guest speaker at the recent installment of EFP Informs, a webinar series presented by the UC Santa Barbara Economic Forecast Project (EFP).

What was a smaller, investment-oriented California government in the mid-20th century has become large and inefficient, with plenty of room for reform, according to Ohanian. How did we get here?

To answer that question, EFP director and UC Santa Barbara professor of economics Peter Rupert began with a snapshot of the current state of the economy.

“The economy is still fighting to get where it was pre-pandemic,” he said. According to the latest information from the Bureau of Labor Statistics, people continue to join the workforce, with a “robust” 850,000 reported for June. That optimism was offset for Rupert by a slight drop in average weekly hours worked, from 34.8 in May to 34.7 in June. It may look like a tiny difference, he said, but more workers working fewer hours in this case translated to only slightly more than 15 million additional hours, or the equivalent of 432,395 new workers.

“The point is that yes, it was a pretty good report for most people; I think it was a disappointing report, to be honest,” said Rupert, who also pointed to an uptick in people filing new unemployment claims.

The numbers for Santa Barbara County reflect the nationwide struggle, with about 185,000 employees in the workforce as opposed to the high of about 200,000 before the pandemic. The same performance was seen in the leisure and hospitality sectors, the county’s largest economic engines. The unemployment rate, at about 6 percent, remains elevated. Despite the disappointing numbers, we’re “still on the upswing,” according to Rupert.

“Things are looking good overall in terms of growth,” he said.

Meanwhile, recent data reveals California’s population declined in 2020 by about 182,083 people. It’s a large number, but one largely attributable to rare, “one-off” causes, including COVID-19 (51,000) and suspension of immigrant visas (100,000), as well as ongoing factors such as declining birth rates and an aging population. Additionally, more people have been leaving the state than coming in from other states, a decade-long trend.

The present situation is a far cry from the California of the 1950s and 60s, when it went from being a “sleepy” state of about 2 million to hosting 16 million by 1960. Back then, Ohanian said, it was the height of the baby boom generation, the population was exploding and about half were under 24 years old. Despite the relatively small number of taxpayers, the California government responded with a tide of infrastructure projects.

“The state government found a way to build schools and hospitals, and invest in water, roads and highways, utilities and state colleges,” Ohanian said. “They found a way to do that despite a budget that was one fifth the size of today’s.” The success of the California Dream, he said, was due to effective governance: investment, efficient use of resources, as well as an “incredibly effective public-private partnerships.”

In comparison, he said, today the state government spends five times more per capita, “but a lot of basic government functions are just not getting done. Investment is inadequate.”

The effects of this lack of investment (4 percent these days versus 25 percent during the immigration heyday) are perhaps most evident in the current state of California’s infrastructure, rated D+ by the American Society of Civil Engineers. The Oroville Dam in Northern California, for instance, built in 1968, could have undergone recommended retrofits for an estimated $40 million in 2005, Ohanian said, instead of the $1.1 billion it cost in 2017 after spillways failed, threatening a nearby population of 188,000 people. More recently, the lack of investment showed itself with the state’s Employment Development Department’s (EDD) antiquated computer systems, which faltered repeatedly in 2020 and 2021, causing delays in processing claims during the last two years, in addition to failing to protect against fraudulent claims.

The tipping point, to Ohanian, was the 1969 Santa Barbara oil spill, an event that became a flashpoint in the growing concern over environmental degradation.

“It received remarkable coverage throughout the media,” he said. “It really shone the spotlight on the environmental consequences of economic growth.” It also turned the nascent environmental movement into a much broader political movement.

“It was, what I would say, a political approach to do whatever it takes,” Ohanian explained. Thus, government was incentivized to take on more than it should have, he said, which would result in more regulation, more spending, higher taxes and higher housing costs.

“From my standpoint the remarkable politicization of environmental movement eschewed the standard application of common sense economic thinking … we could have protected the environment and maintained our previous focus and model of governance,” Ohanian said. The California Environmental Quality Act (CEQA), for instance, requires state and local government agencies to reduce the environmental impacts of proposed projects to the extent feasible, but, said Ohanian, “feasible doesn’t mean practical.” The result was reduced housing supply and increased construction costs, leading to some of the most expensive real estate in the country.

Increased costs are also to blame for the flight of several major companies, including Bank of America, Hewlett Packard, Tesla, Charles Schwab and Toyota, all of whom have left California for lower-cost states.

“All we need to do is go back to the governing principles of limited, focused government that uses tax dollars wisely, that applies — even just informally — cost-benefit analysis, that invests, and that puts the interests of a broad group of people ahead of smaller, politically favored constituents,” Ohanian said.

It’s easier said than done, especially in terms of housing in Santa Barbara.

“I almost think that the genie might already be out of the bottle,” Ohanian said, “And I think this might be true of a lot of coastal California cities.” People invest disproportionately large amounts of their income into their homes to the exclusion of other assets, he said.

“Is that a sensible portfolio of assets from the standpoint of everything we know about financial theory? No, no, it’s not,” Ohanian said. “Housing was never meant to be an investment, but it’s become that.” As a result, people become protective of their investments by opposing new development, which perpetuates the low availability and high cost of housing.

Money for infrastructure could be easier to come by, Ohanian said, if reforms could be made in three areas that are “rife with inefficiencies”: state prisons, K-12 education, and health and human services. These areas take two-thirds of the state’s budget.

“I don’t see how we get from here to having a functional California in 10 or 15 years without making reforms in those three areas,” he said.