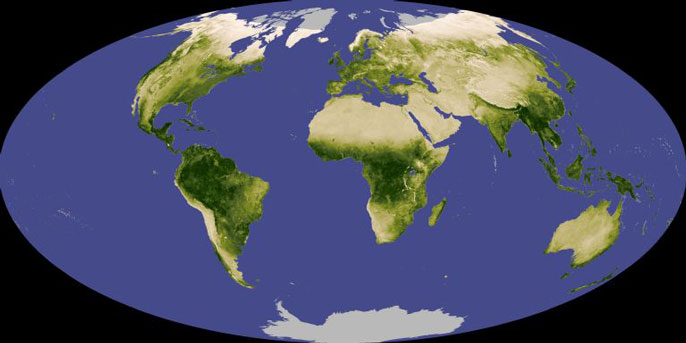 Satellites monitor how ‘greenness’ changes with Earth’s seasons. UC Riverside scientists are studying the accompanying changes in atmospheric composition as a marker for life on distant planets.

Dozens of potentially habitable planets have been discovered outside our solar system, and many more are awaiting detection.

Is anybody — or anything — there?

The hunt for life in these places, which are impossible to visit in person, will begin with a search for biological products in their atmospheres. These atmospheric fingerprints of life, called biosignatures, will be detected using next-generation telescopes that measure the composition of gases surrounding planets that are light years away.

It’s a tricky business, since biosignatures based on single measurements of atmospheric gases could be misleading. To complement these markers, and thanks to funding from the NASA Astrobiology Institute, scientists at the University of California, Riverside’s Alternative Earths Astrobiology Center are developing the first quantitative framework for dynamic biosignatures based on seasonal changes in the Earth’s atmosphere.

Titled “Atmospheric seasonality as an exoplanet biosignature,” a paper describing the research was published in The Astrophysical Journal Letters. The lead author is Stephanie Olson, a graduate student in UC Riverside’s Department of Earth Sciences.

As Earth orbits the sun, its tilted axis means different regions receive more rays at different times of the year. The most visible signs of this phenomenon are changes in the weather and length of the days, but atmospheric composition is also impacted. For example, in the Northern Hemisphere, which contains most of the world’s vegetation, plant growth in summer results in noticeably lower levels of carbon dioxide in the atmosphere. The reverse is true for oxygen.

“Atmospheric seasonality is a promising biosignature because it is biologically modulated on Earth and is likely to occur on other inhabited worlds,” Olson said. “Inferring life based on seasonality wouldn’t require a detailed understanding of alien biochemistry because it arises as a biological response to seasonal changes in the environment, rather than as a consequence of a specific biological activity that might be unique to the Earth.” Further, extremely elliptical orbits rather than axis tilt could yield seasonality on extrasolar planets, or exoplanets, expanding the range of possible targets.

Searching for a signature out there

In the paper, the researchers identify the opportunities and pitfalls associated with characterizing the seasonal formation and destruction of oxygen, carbon dioxide, methane, and their detection using an imaging technique called spectroscopy. They also modeled fluctuations of atmospheric oxygen on a life-bearing planet with low oxygen content, like that of Earth billions of years ago. They found that ozone (O3), which is produced in the atmosphere through reactions involving oxygen gas (O2) produced by life, would be a more easily measurable marker for the seasonal variability in oxygen than O2 itself on weakly oxygenated planets.

“It’s really important that we accurately model these kinds of scenarios now, so the space and ground-based telescopes of the future can be designed to identify the most promising biosignatures,” said Edward Schwieterman, a NASA Postdoctoral Program fellow at UC Riverside. “In the case of ozone, we would need telescopes to include ultraviolet capabilities to easily detect it.”

Schwieterman said the challenge in searching for life is the ambiguity of data collected from so far away. False positives — nonbiological processes that masquerade as life — and false negatives — life on a planet that produces few or no biosignatures — are both major concerns.

“Both oxygen and methane are promising biosignatures, but there are ways they can be produced without life,” Schwieterman said.

Olson said observing seasonal changes in oxygen or methane would be more informative.

“A potentially powerful way to assess exoplanets for inhabitation would be to observe their atmospheres throughout their orbits to see if we can detect changes in these biosignature gases over the course of a year,” she said. “In some circumstances, such changes would be difficult to explain without life and may even allow us to make progress towards characterizing, rather than simply recognizing, life on an exoplanet.”

Timothy Lyons, a professor of biogeochemistry in UC Riverside’s Department of Earth Science and director of the Alternative Earths Astrobiology Center, said this work advances the fundamental approach to searching for life on very distant planets.

“We are particularly excited about the prospect of characterizing oxygen fluctuations at the low levels we would expect to find on an early version of Earth,” Lyons said. “Seasonal variations as revealed by ozone would be most readily detectable on a planet like Earth was billions of years ago, when most life was still microscopic and ocean dwelling.”

In addition to Olson, Schwieterman, and Lyons, the paper’s authors are Andy Ridgwell and Stephen Kane from UC Riverside, Christopher Reinhard from the Georgia Institute of Technology, and Victoria Meadows from the University of Washington. The work is funded by the NASA Astrobiology Institute and the National Science Foundation (NSF) Frontiers in Earth System Dynamics (FESD).