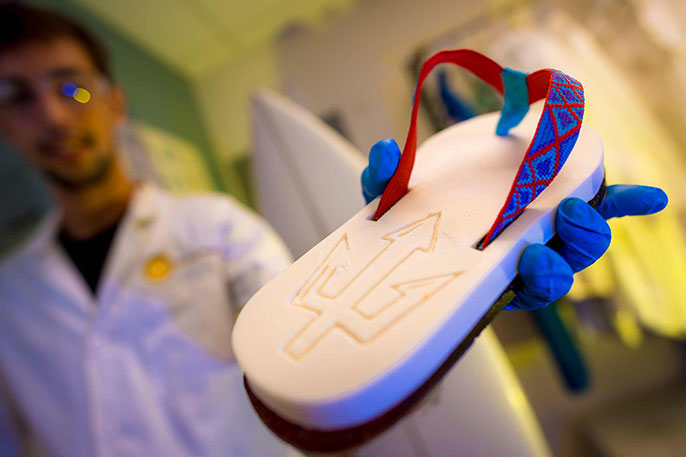 The first prototypes of their new invention, developed over the summer in a York Hall chemistry laboratory, consist of a flexible, spongy slipper adorned with a Triton logo and a simple strap — fairly basic, as flip-flops go.

But when they go into full production later this academic year at what researchers hope will be a projected cost of $3 a pair, the impact of this campus innovation could be revolutionary, changing the world for the better environmentally.

That’s because 3 billion petroleum-based flip-flops are produced worldwide each year, eventually ending up as non-biodegradable trash in landfills, rivers and oceans around the globe.

Mayfield and Pomeroy, along with their undergraduate and graduate students, teamed up two years ago to develop the world’s first algae-based surfboard. The UC San Diego scientists worked with a local surfboard blank manufacturer, Arctic Foam of Oceanside, to figure out how to make from algae oil the hard, polyurethane foam core of a surfboard, which is typically constructed from petroleum.

That development, which was quickly embraced by a surfing industry looking for ways to produce more sustainable and environmentally friendly products, got the two UC San Diego professors thinking about their next step.

If this could be done for some of the 500,000 surfboards annually sold around the world, why not for the 3 billion flip-flops and millions of other new shoes that each year clutter our landfills and oceans?

“The algae surfboard was the first obvious product to make, but when you really look at the numbers you realize that making a flip-flop or shoe sole like this is much more important,” says Mayfield. “Depending on how you do the chemistry, you can make hard foams or soft foams from algae oil. You can make algae-based, renewable surfboards, flip-flops, polyurethane athletic shoes, car seats or even tires for your car.”

To demonstrate the feasibility of their campus-based innovation, Triton Soles, Mayfield and Pomeroy applied for and were awarded last April a $50,000 proof-of-concept grant from the campus Office of Research Affairs. Theirs was one of eight grant awards made in the first year of the Accelerating Innovations to Market program, initiated by UC San Diego’s Office of Innovation and Commercialization, a part of the Office of Research Affairs, and paid for with the help of local elected officials through State Assembly Bill 2664. The goal of the bill is to bring more laboratory inventions from the campus to commercial development.

“Part of the challenge is that typically I’d make a discovery, publish a paper and that’s sort of the end of it,” Mayfield explains. “But the best invention that you keep inside the lab really isn’t valuable for the world. And the way you make that invention valuable is to turn it into a product.”

The two professors, along with Michael Burkart, a professor of chemistry and biochemistry, formed a startup company, Algenesis Materials, which employs some of the students working on the flip-flops and other projects and provides them with the opportunity to experience what Pomeroy calls “project-based learning.”

“Teaching chemistry in the classroom is sometimes like trying to teach soccer at the chalkboard,” Pomeroy explains. “In the laboratory, students are far more engaged when they’re actually trying to solve a problem. Most people will tell you that our students are really, really bright, but they don’t always have practical experience. This is a way to provide them with that.”

As the first product for Algenesis, the Triton flip-flop will allow the three faculty members and students to fine-tune the chemistry and manufacturing process for their future shoe soles, car seats and other products traditionally made from petroleum.

“Petroleum comes from algae that lived in the ancient oceans hundreds of millions of years ago,” says Mayfield. “A lot of people don’t know that. But what that means is that anything we can make from petroleum we can ultimately make from algae.”

The Triton flip-flops, shoe soles and other polyurethane products the scientists make from living algae oil are “sustainable” because the carbon to construct them was pulled from the atmosphere, rather than underground oil reserves. And the scientists are seeking to also make them “biodegradable,” by chemically converting the algae oil into polyurethane in manner that will allow the carbon bonds to be degraded by microorganisms.

“The idea we’re pursuing is to make these flip-flops in a way that they can be thrown into a compost pile and they will be eaten by microorganisms,” says Mayfield.

As a longtime surfer immersed in the ocean environment, Mayfield says that using the expertise he developed over decades studying algae and applying it to develop sustainable and environmentally friendly surfboards, flip-flops and other beach products was important to him.

“If we can make these products sustainable and biodegradable, we can impact not only San Diego, but every beach community on the entire planet,” he says. “In San Diego, we have this fantastic surfing culture, many of our faculty and students are surfers, and I think all of us understand because of that connection to the ocean how important the environment is.”

The algae surfboard developed two years ago by students and faculty is now being used by a number of professional surfers and has spawned a new industry. And with the help of a shoe factory in Leon, Mexico, the current plan is to do the same. The first step, however, will be the production of a few thousand pairs of Triton flip-flops as a test, which will be provided to UC San Diego alumni and given out for special events.

“It’s going to be a little while before you can buy one of these flip-flops in the store, but not too long,” says Mayfield. “Our plan is that in the next year, you’ll be able to go into the store and buy an Algenesis flip-flop that is sustainable, biodegradable and that was invented by students at UC San Diego.”