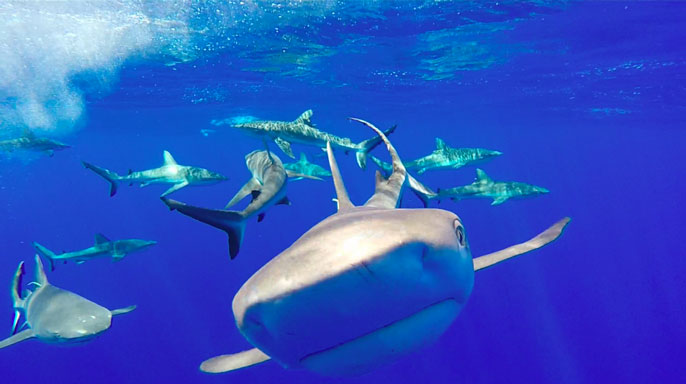 A consortium of scientists studied a healthy population of grey reef sharks on Palmyra atoll.

Many shark populations around the world are known to have declined over the past several decades, yet marine scientists lack important baseline information about what a healthy shark population looks like. A clearer picture is now coming into focus — thanks to a team of scientists who investigated the size of an unfished community of reef sharks.

Researchers from UC Santa Barbara and colleagues conducted an eight-year study of a healthy shark population on Palmyra, a remote, uninhabited atoll in the central Pacific Ocean. This pristine ecosystem is part of a marine refuge that extends 50 nautical miles from its shores. No fishing is allowed within these borders, which protect a diverse array of species, including grey reef sharks. The investigators were surprised to find far fewer sharks than expected. The study results appear in the journal Scientific Reports.

“We estimated a population size of between 6,000 to 8,000 grey reef sharks at Palmyra, which works out to a density of about 20 sharks per square kilometer,” said lead author Darcy Bradley, a postdoctoral researcher in UC Santa Barbara’s Sustainable Fisheries Group, a collaboration of the campus’s Marine Science Institute and Bren School of Environmental Science & Management.

“Previous research that used underwater visual survey methods estimated a density of between 200 to 1,000 sharks per square kilometer,” Bradley continued. “So while it’s not totally clear how those density estimates would scale up to a population estimate, it is clear that it would end up a lot bigger than our estimate.”

From 2006 to 2014, the research team captured reef sharks across Palmyra and fitted them with numbered ID tags. They also tracked the movement of some of these animals using acoustic telemetry tags, which emit a sound that is then recorded by acoustic receivers located underwater.

The largest reef shark tag recapture program in the world

Of the 1,300 tagged reef sharks, 350 individuals were recaptured, making this effort the largest reef shark tag recapture program in the world. In addition to the tag data, the investigators recorded information on the sex and size of each animal and the location of its capture. They plugged all the data into an algorithm that estimated the total population size.

According to Bradley, the fact that the shark population was smaller than anticipated is not all bad news.

Additional UC Santa Barbara co-authors on the study are Douglas McCauley, Bruce Kendall, Steven Gaines and Jennifer Caselle. Other co-authors include Eric Conklin and Kydd Pollock of The Nature Conservancy, Yannis Papastamatiou of Florida International University and Amanda Pollock of the U.S. Fish and Wildlife Service.