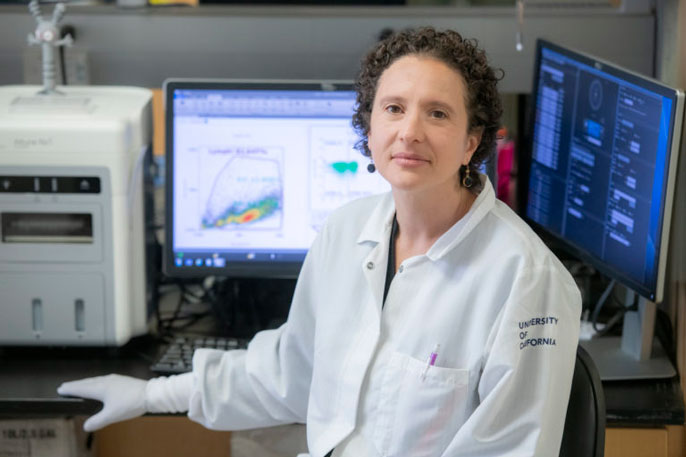 “For many people, this is the first time that things outside their control have completely dominated their life,” says Ilhem Messaoudi Powers, associate professor of molecular biology & biochemistry, who’s leading a study of UC Irvine Health workers’ exposure to COVID-19.

Ilhem Messaoudi Powers, associate professor of molecular biology & biochemistry at UC Irvine, is enjoying a rare weekend at home with her husband, Dr. Michael Powers, when they hear the rustling of their two young children.

He bounds up the stairs to retrieve Owen, 3, and Olivia, 6 months, from a Saturday afternoon slumber. Soon the living room is full of the joyous noises of a toddler and an infant.

When they’re not wearing their mommy and daddy hats, Ilhem and Michael Powers are exploring and immersing themselves in an entirely different world: the COVID-19 pandemic.

A virologist and immunologist, Ilhem Powers leads a team of researchers who’ve launched a surveillance study of UCI Health workers to determine how many have antibodies against the coronavirus.

Michael Powers is a pulmonologist who works as a critical care doctor at the Naval Medical Center San Diego, caring for patients with COVID-19, as well as others.

Because of his unpredictable schedule, he often stays for days at an apartment in San Diego while his wife, with the assistance of a part-time nanny, juggles kids and career from the couple’s on-campus home and her laboratory.

“Mike and I have been through a lot together,” she says. “We’ve really learned to focus on the now.”

Indeed, her husband was just two weeks into medical school at New Orleans’ Tulane University when Hurricane Katrina hit in late August of 2005. Ilhem Powers had accepted a job at the school as an assistant professor and was getting ready to relocate from their previous home in Portland, Oregon.

The New Orleans duplex that the couple had renovated with most of their savings wound up under 8 feet of water. It took them more than a year to recover.

“One of the biggest lessons I’ve learned in life is to focus on the things you have some control over,” Michael Powers says. “You just have to let go of the rest.”

Ilhem Powers’ lab cohort have pivoted from their usual work to conduct COVID-19 research as members of UC Irvine’s Institute for Immunology and Center for Virus Research.

Their surveillance study, funded by a $60,000 UC Irvine grant and expected to last a year, will repeatedly examine 300 healthcare providers. The collection of samples has already begun.

“We want to know how many of them may have already been exposed [to COVID-19] and didn’t know about it — and how many of them potentially have immunity,” Ilhem Powers says. “We’ll take blood samples and nose swabs to measure antibodies and T cell responses, which kill infected cells, as well as potential asymptomatic shedding. It’s a multipronged approach.”

Arriving at UC Irvine in January 2017 after serving as a researcher and assistant professor at UC Riverside’s School of Medicine, she has years of experience studying how the human immune system interacts with emerging viral diseases such as Ebola, Chikungunya, Zika and monkeypox.

“For some viruses,” Ilhem Powers explains, “antibodies are sufficient [to kill them]. For others, you need more of a T cell response. We don’t yet know enough about this novel coronavirus.”

Michael Powers, who began his residency at the Naval Medical Center San Diego in 2010, says the COVID-19 pandemic has forced him and other doctors to live with a lot of uncertainty.

But he has a stoic air about him despite his relatively new role of treating patients with a little-understood disease. Perhaps experiencing a serious lung-related health scare himself contributes to his even-keeled nature.

During his wife’s last year at UC Riverside, Michael Powers went on an outreach mission to Ghana. Shortly after returning home, he developed MRSA in his lungs and had to undergo thoracic surgery. He spent 10 days in the hospital and 30 days in convalescence.

“It was a pulmonologist’s worst nightmare,” Ilhem Powers says. “It was really scary.”

So is COVID-19, her husband says: “I think a lot of people have a very romanticized notion of what ICU-level care is and being on a ventilator. The movies definitely don’t do it justice.

“When people go on ventilators, it’s not at all uncommon for them to be on them for two weeks or more. It’s not a pleasant thing to have a giant plastic tube down your throat and a machine telling you when to breathe.”

Michael Powers says he takes extreme precautions at work and elsewhere in San Diego before driving up to Irvine to spend time with his wife and children.

“People ask me all the time, ‘Isn’t he worried?’” Ilhem Powers says. “They ask, ‘Shouldn’t he just stay in his apartment and not come up here and pose a health risk to you and your kids?’ And we just say we understand and accept the risk.”

She and her colleagues get tested regularly for COVID-19 using equipment in their lab.

Having already weathered a lot of adversity, the couple believe they’re uniquely equipped to cope with COVID-19.

“What we both do for a living, and our past experience dealing with crises, has put us in this perfect position to deal with this pandemic,” he says.

“For many people,” she adds, “this is the first time that things outside their control have completely dominated their life.”

Often, the two will sit down and go over COVID-19 research papers together and compare notes, discussing where the pandemic is headed, possible therapies and — longer term — potential vaccines.

But they make sure that when they’re together, they shower most of their attention on Owen and Olivia.

“When he’s home,” Ilhem Powers says of her husband, “it’s family time. For us, it’s all about enjoying the little moments.”