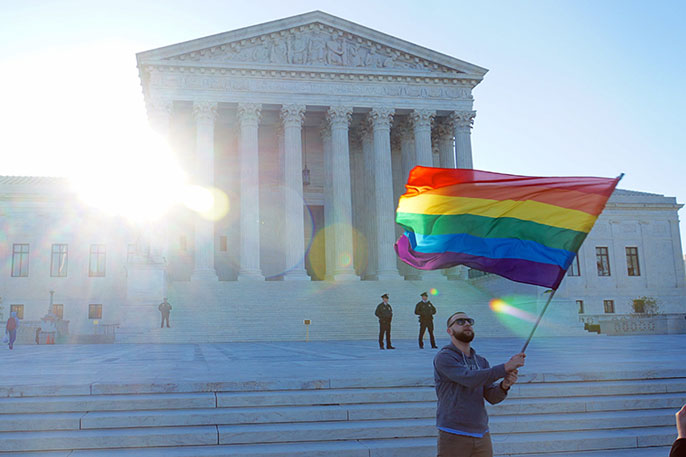 For the first time, the U.S. Supreme Court ruled that lesbian, gay and transgender people are protected in the workplace by federal civil rights laws.

The U.S. Supreme Court on Monday ruled that federal anti-discrimination law protects gay, lesbian and transgender people from job and employment discrimination, for the first time extending protections to LGBTQ people in every state.

“We went to bed yesterday in a country where someone could be fired from their job in 28 states because of their sexual orientation or gender identity,” said Billy Curtis, director of the Gender Equity Resource Center at UC Berkeley, a hub of community and education for staff, students, faculty and alumni. “Today, after decades of protests and litigation, we are now protected in all 50 states and the District of Columbia.”

The Supreme Court’s ruling is expected to be a landmark in the history of American civil rights. Title VII of the Civil Rights Act of 1964 prohibits discrimination “because of sex,” and by a 6-3 vote, the justices said, for the first time, that “sex” includes sexual orientation.

UC Berkeley is recognized nationally as a center of legal, policy and cultural scholarship on LGBTQ rights. Several scholars offered their assessments of Monday’s decision.

The justices did what they were supposed to: They followed the plain language of Title VII. This will matter in workplaces all across the country. Additionally, the clear implication of the decision is that all federal laws that prohibit sex discrimination also forbid discrimination based on sexual orientation and gender identity. This is long overdue and truly will matter for so many people throughout the country.

(Read Chemerinsky’s op-eds on the ruling in the Los Angeles Times and in Bloomberg Law.)

In regions where there has been significant discrimination against the LGBTQ population, individuals have suffered a decrease in their sense of psychological safety and increased stress, both of which have significantly negative health implications. On the job, this results in loss of a sense of belonging, and not only negatively affects the person, but also their productivity and ability to be successful in their jobs.

We do not need more barriers to the success of non-dominant populations. We need to address these barriers and work to remove them.

While this decision is intended to include protections for LGBT employees, activists need to expect legislative and juridical challenges to these expanded protections particularly as they pertain to transgender populations.

The larger context for this decision needs to include all of the ways that state institutions — prisons, detention centers, schools, senior centers, homeless shelters — routinely discriminate against transgender and gender non-conforming people in ways that are always amplified by race.

The effects of that discrimination include physical and emotional violence and harm. The academic literature on this is clear: Very often the primary perpetrators of that violence are police and other law enforcement and criminal justice personnel.

This decision has come a few days after Trump’s announcement that authorizes discrimination against transgender people seeking medical attention, issued on the anniversary of the Pulse nightclub massacre, a declaration of cruelty by the state toward trans people — in the middle of a pandemic.

We went to bed yesterday in a country where someone could be fired from their job in 28 states because of their sexual orientation or gender identity. Today, after decades of protests and litigation, we are now protected in all 50 states and the District of Columbia.

This celebration is bittersweet as the news comes only three days after the Trump administration rolled back health care protections for LGBTQ populations while in the middle of a pandemic. This victory also comes during protests against the ongoing murder of black people at the hands of law enforcement and an epidemic of murder of transgender people — 27 in 2019 — most of them transgender black women. Two of them, Dominique “Rem’mie” Fells and Riah Milton, were killed just last week.

While we celebrate this interpretation of Title VII, we are still living with Supreme Court decision seven years ago that gutted key voting rights provisions, which impacts queer, trans, black, indigenous, people of color (QTBIPOC) communities. LGBTQ people in 29 states still lack protection from discrimination in housing and public accommodation. LGBTQ couples can be denied the ability to adopt by various agencies.

We celebrate today. Tomorrow we get back to work.