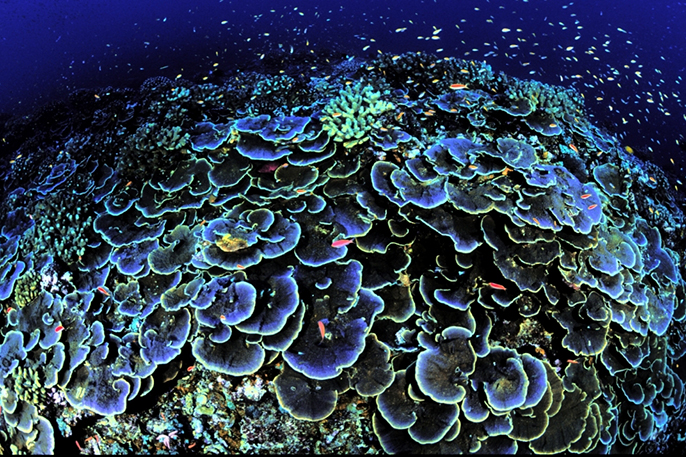 The Benioff Ocean Initiative based at and led by UC Santa Barbara aims to research the root causes of pervasive ocean issues and use science to solve them.

Maybe it’s all the plastic you see on the beach where you take your kids. Or that news story you read about shark-finning and can’t quite get it out of your mind. Are you frustrated trying to identify sustainable options on the menu at your favorite seafood restaurant?

These are common concerns, and they all lead back to one place: the ocean. And with climate change acidifying and heating up the seas, global fisheries being overharvested and more than 5 trillion pieces of plastic working their way into marine food webs, they’re the tip of a massive threat to our oceans.

The Benioff Ocean Initiative, a bold new endeavor led by the University of California, Santa Barbara, aims to research the root causes of these pervasive ocean problems and use science to solve them, supported by funding from Marc and Lynne Benioff.

Cast as an experimental new model for university-driven change, the innovative effort will bring senior ocean scientists together with students to develop science-based solutions that will address problems plaguing the oceans. In an effort to link together the strength of university-powered research with the creativity of global ocean communities, this new initiative will use a crowdsourcing campaign to collect ideas on ocean issues submitted from anyone, anywhere in the world. These ideas will set the agenda for the initiative.

“We cannot stand by and watch our oceans become increasingly sickened and fisheries decimated,” said Marc Benioff. “Just as we have research hospitals seeking cures for devastating illnesses, we need a hospital to heal our oceans. We can bring the brightest minds in marine science and our communities together and empower them to bring our oceans back to health.”

“On behalf of UC Santa Barbara, I wish to express our deep appreciation for the truly inspiring and generous commitment by Marc and Lynne Benioff,” said Chancellor Henry T. Yang. “With this transformative gift, we are proud to establish the Benioff Ocean Initiative, which will enhance the ability of researchers and community stakeholders to address current problems in ocean health through applied environmental science.

“Building the capacity of the university, including educating our students — future environmental leaders — to investigate and address these challenges in innovative and demonstrable ways is a vital step to strengthening sustainable environmental practices worldwide,” Yang added. “Through their gift, the Benioffs’ visionary leadership sets the stage for tremendous beneficial change.”

“This is a game-changing undertaking that will contribute invaluable research and solutions to ocean issues that will affect the world’s food supply for countless generations,” said UC President Janet Napolitano, who launched the Global Food Initiative to marshal the expertise of researchers across the UC system. “It’s significant, too, that The Benioff Ocean Initiative will bring students together with scientists and collect ideas from people throughout the world.”

‘A hospital for the oceans’

Headquartered at UC Santa Barbara’s Marine Science Institute, an internationally recognized center of excellence for interdisciplinary oceans research, the Benioff Ocean Initiative is being directed by noted marine biologist Douglas McCauley, but will be run as a collaboration among ocean scientists worldwide, as well as students. Together they’ll highlight the most pressing threats to ocean health through research, and then use what they learn to address these illnesses in the ocean.

“The Benioff Ocean Initiative will be a first of its kind ‘hospital for the oceans,’ ” McCauley said. “A university hospital that studied illness without treating illness wouldn’t have a lot of value. Likewise, it is no longer tenable to operate marine research institutes that study ocean problems without using this science to fix these same issues.” The Benioff Ocean Initiative, McCauley says, will be a collective of “sharp minds that are not afraid to get their hands dirty making ocean change happen.”

“This initiative is a bold statement by UC Santa Barbara to the world that we must redefine possibilities for creating change in academia,” he continued. “Universities must do more than studiously write up the obituary for the oceans. The Benioff Ocean Initiative is an experiment that will make universities themselves epicenters for change. In the case of the oceans, this is better late than never. This re-visioning of the responsibility of the university emulates the Benioffs’ progressive stance around corporations and business leaders taking on social and environmental issues.  ”

Ideation. Research. The fix. That’s the three-step process at the heart of Benioff Ocean Initiative, which begins by inviting the global public to identify ocean issues that need solving by submitting ideas online. From each round of crowdsourcing one top idea will be selected by the initiative’s team of marine scientists, who will then, McCauley said, kick start the process of “doing what science does best — study the heck out of the problem.”

The initiative will assemble and fund a team of global experts to intensely research a solution to selected problems. During a subsequent research summit at UC Santa Barbara, scientists on the team will share what they’ve learned and collaboratively design a best fix for the problem.

Then the best part: bringing that fix to life.

Benioff Ocean Initiative staff and the ocean scientists behind each solution will “work together to build the device, write the code or invent the tech needed to solve the ocean problem,” McCauley said. “A million dollars will be invested in putting each fix into place. And every fix that comes out of the Benioff Ocean Initiative will be designed so that these successes can be replicated as widely as possible.”

In a world where the oceans provide millions of jobs and yield trillions of dollars in goods and services each year, and where 1.4 billion people frequently rely on fish as a food source, that replication will be key, according to McCauley.

“Our fate is inextricably linked to the fate of the oceans,” he said. “This is becoming as much or more about saving ourselves than it is about saving the whales. This is about putting healthy food on our table, oxygen in our air, keeping pollution out of the bodies of ocean animals and off our dinner plates. It’s about protecting the vibrancy of our economies and giving our kids enough nature to marvel at.”

And it absolutely can be done, McCauley assured, characterizing the oceans as “wonderfully resilient” places where life is “much healthier and still much wilder than life on land.”

“There have been far fewer extinctions in the oceans, which means the building blocks of ocean life are almost all still swimming around somewhere out there,” he said. “With some strategic investment of intellect, resources and creativity, we can fix many of the problems facing the oceans and threatening our own well-being before they become irreversible.”

Thanks to just such an investment by Marc and Lynne Benioff, that’s precisely what the ambitious Benioff Ocean Initiative intends to do.

“I am honored and delighted that Marc and Lynne Benioff have decided to establish the Benioff Ocean Initiative here at UC Santa Barbara,” said Pierre Wiltzius, the Susan & Bruce Worster Dean of Science and executive dean of the College of Letters and Science at UC Santa Barbara. “Their passion for creating a better world through meaningful, deliberate change is inspirational, and their desire to bring students together with top researchers is directly aligned with the goals of this university.

“I can’t think of a better person to lead this new model for ocean change than Douglas McCauley,” Wiltzius added. “He and his team are widely cited as experts in fragile marine ecosystems and are at the forefront of developing new ideas for preserving our oceans. I speak for my entire division when I say that we enthusiastically look forward to the innovations that will come from this initiative.”

Urging anyone who is interested to visit the just-unveiled Benioff Ocean Initiative website to submit an idea for ocean change, McCauley said, “We can’t wait to set sail on this important journey together.”