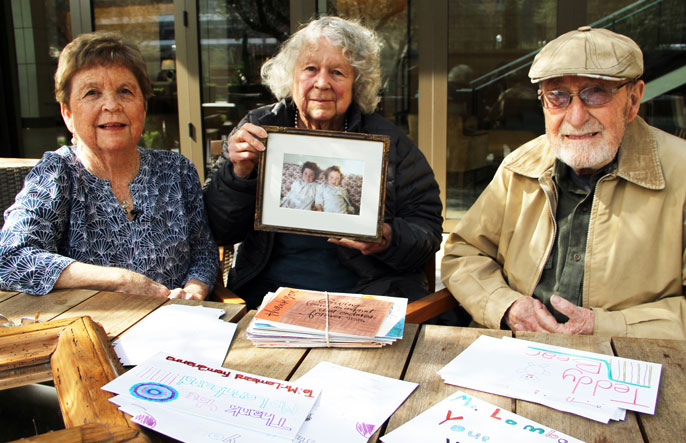 Denice Lombard with her mother, Anne, and father, Ted. Six years after Denice’s twin sister, Diane, died of kidney failure at the age of seven, Ted donated a kidney to Denice.

Denice Lombard and her father, Ted, made history in 1967 by becoming one of the first father-daughter duos to survive kidney transplant surgery in the United States.

Today, 50 years later, they both are thriving and are marking the anniversary of Denice’s transplant surgery at UCLA to urge more people to consider becoming organ donors.

“I am so very thankful to my dad for giving me the gift of life, not once, but twice,” said Denice, 62, who lives near Washington, D.C. “If you want living proof that kidney donors and their recipients can lead full, happy, healthy lives, just look at us.”

For the first time since that life-saving operation, the Lombard family reunited recently at UCLA, where doctors performed the surgery a half-century ago and helped to change the course of medicine.

“It was a big gamble,” said Dr. Albin Gritsch, surgical director of the kidney and pancreas transplant program at UCLA, who was not involved in Denice’s care at the time. “Denice’s transplant was very brave and pioneering, especially considering she was only 13 years old.”

While common today, kidney transplants were still considered experimental in the mid-1960s, Gritsch said, and were generally not performed on children.

“Only about half of the transplanted kidneys were viable after a year, meaning doctors were reluctant to approve the surgery for children,” he said.

The odds didn’t matter to Denice’s father, Ted, though. “I lost one daughter already,” Lombard said. “I wasn’t going to lose another.”

Since that groundbreaking procedure, UCLA has built one of the largest and most successful kidney transplant programs in the United States.

“It used to be that donating a kidney meant extensive, open-abdomen surgery, and recovery could take several months,” said Dr. Gabriel Danovitch, medical director of the kidney and pancreas transplant program. “Today, the surgery is done laparoscopically by creating two small incisions to remove the kidney. It’s minimally invasive, and people can get back to normal desk jobs in a couple of weeks.

According to UNOS, last year there were a record 357 kidney transplants performed at UCLA. “We’ve come a long way and owe a debt of gratitude to the Lombards, who were a part of this from the beginning,” Danovitch said.

Denice and her sister Diane were born in 1954, with a genetic disorder that slowly caused their kidneys to fail. Diane’s kidney deteriorated more rapidly. At age 7, Diane died, and her parents began a six-year crusade to save Denice.

“Because dialysis was still so new then, I was told by several doctors around Los Angeles that only males, heads of households who had jobs and who could return to work, would be allowed to be on dialysis,” said Anne Lombard, Denice’s mother.

“I tried everything I could think of and knocked on every door I could,” Anne recalled. Running out of options, the Lombards went to UCLA to propose a transplant. Doctors at UCLA decided to take the chance.

Honoring a family of pioneers

Recently, doctors, staff, donors and patients gathered for a reception to honor the Lombards.

“I want to take this opportunity to encourage more people to consider becoming living donors,” said Denice, while standing at a lectern during the reception. “My dad took a chance a half century ago volunteering to be a donor, and is still very active and incredibly healthy today. This year he will turn 88, and so will my kidney.”

Kidneys from living donors are also much more durable, lasting an average of 26.6 years, nearly twice as long as kidneys from deceased donors. However, only about a third of 19,061 kidneys (a record high) transplanted in 2016 came from living donors, according to United Network for Organ Sharing. That’s a statistic the Lombards hope will change.

Currently, there are about 100,000 people on a kidney donor waiting list, with a new patient added about every 14 minutes.

“The kidney is the only whole organ you can share as a living donor,” Denice said. “We are born with seven times the capacity we need with our kidneys, so you can donate one and never really miss it,” Denice said. “If my dad can do it and live a full, healthy and active life well into his 80s, I would challenge more people to consider it.”

To learn more about organ donation, go to www.organdonor.gov or visit the the UCLA kidney transplant center.