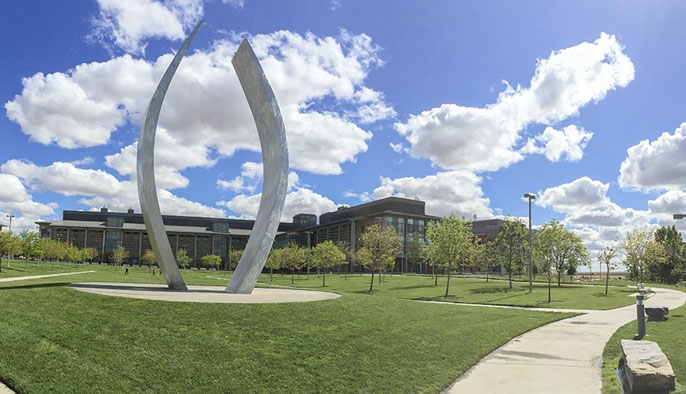 When Nikko Da Paz decided to go to graduate school, she didn’t limit herself to one degree — or even one campus.

The mother of two young children with autism enrolled at UC Merced in 2011, and in May she became the university’s first African American student to earn a Ph.D. While completing her doctorate at UC Merced, she was simultaneously enrolled at California State University, Stanislaus, where she completed a master’s in psychology with a concentration in applied behavior analysis. Both campuses are roughly an hour’s drive from her Los Banos home.

Through those high-mileage academic years, Da Paz relied upon a supportive husband, prayer, and a dry erase board that helped organize her thoughts and a multitude of tasks. She capped it all by handling her thesis and dissertation defenses just a few days apart.

Da Paz said she’s excited to be the first African American to earn a doctorate at UC Merced but said that was never her motivation. Her research, in psychology, examined stress levels for parents of children with autism.

“My inspiration is the children and the families I serve,” she said.

From engineering to working with kids with autism

Da Paz earned an undergraduate degree at Stanford University. She intended to major in electrical engineering but switched her focus after beginning to work with children diagnosed with autism.

With a bachelor’s degree in psychology, she worked in schools as an inclusion specialist and classroom aide for children with autism. Da Paz enjoyed the work but said the chronic discord between parents and educators was stressful.

“It was always a war, us against them, and it was hard for me to ethically sit in the middle of it,” she said. Da Paz left to pursue other jobs, such as a guest lecturer at the University of Ghana in West Africa and a researcher in childhood obesity prevention at Stanford University.

The birth of her son Evilasio in 2005 brought about more change. When he was 2, she began to notice familiar signs, such as lack of speech and eye contact.

“Then everything I knew about autism, everything I saw, came flooding back,” said Da Paz, who also has two adult children.

Da Paz quit her job to focus on Evilasio, who is now 10 and homeschooled. Her youngest son, 8-year-old Emilio, also has been diagnosed with autism, but is mainstreamed into regular education.

In returning to that world, she found little had changed. For example, parents were still expected to navigate complex systems to get help for their child while also dealing with the difficult emotions of an autism diagnosis.

“Inspired by my son and by my experiences as a parent, I understood and recognized that parents need a voice,” she said. “They are often the overlooked part of the equation.”

Da Paz chose UC Merced for her doctoral studies. She was part of a small cohort and prized the opportunity to work with professors who were accessible and generous in their mentoring and teaching styles.

“It was such a valuable experience that I don’t think I would have gotten at a larger university,” she said.

In part, Da Paz’s research involved measuring parents’ cortisol levels — an indicator of stress — and asking them to write about traumatic experiences to explore the impact of that approach.

The expressive writing had a positive effect on stress levels, said UC Merced Professor Jitske Tiemensma — one of Da Paz’s two advisers, along with Professor Jan Wallander. While the project was complex and involved many components, including calling parents twice daily to remind them to collect saliva samples, Tiemensma said Da Paz was highly organized.

“She is amazing,” Tiemensma said. “She is one of the best students I have ever worked with, and she’s some sort of Wonder Woman to do a master’s and doctorate at the same time.”

At CSU Stanislaus, Da Paz pursued her master’s degree with an applied behavior analysis concentration to ensure she would qualify to provide that form of treatment to children with autism.

In 2014, Da Paz was appointed by the Governor of California to the regional board of the California State Council on Developmental Disabilities. She has connected with researchers at UC San Francisco to continue her work on caregiving stress for parents of children with autism. She also plans to open a private practice to offer more resources to underserved families and communities.

“There’s so much that I have seen, experienced, and learned,” she said. “I want to be able to share that.”