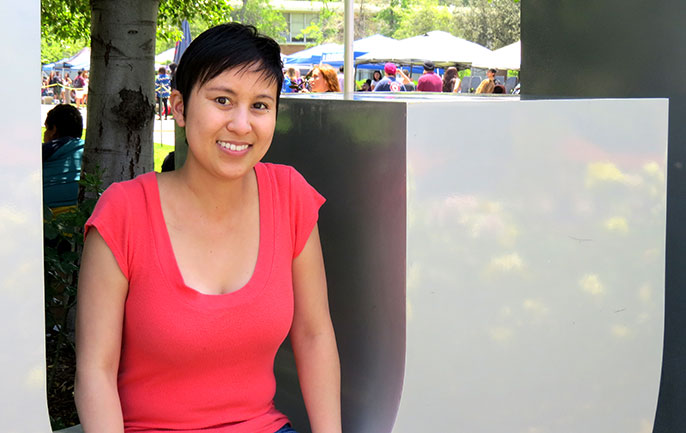 Graduation is always joyful, but for UC Riverside’s Cassie Nguyen, it marks a milestone achieved with an especially large measure of persistence and hope.

Nguyen, who will receive her bachelor’s degree in public policy from UC Riverside on June 14, was diagnosed with a malignant brain tumor at 16. Treatment has cleared her of the disease, but it has not been an easy ride.

Nguyen was a sophomore in high school with a bright future ahead — she was taking all honors and AP classes, playing four sports and participating in several clubs. Then, she began experiencing strange and debilitating symptoms: sensitivity to smells, fatigue, headaches, vomiting and double vision.

At first, no one could tell her what was wrong. It wasn’t until she went to see a neurosurgeon, who suggested Nguyen get an MRI, that doctors figured it out: She had brain cancer; specifically, medulloblastoma.

She was diagnosed on Feb. 10, 2005 and admitted to the hospital immediately. Four days later, Nguyen underwent brain surgery to remove the tumor. That was followed by months of punishing radiation and chemotherapy treatments to remove the remaining malignant cells.

Nguyen did not return to school for a year and a half. She was in and out of the hospital receiving treatment. She suffered shingles on the right side of her face, was bald and in a wheelchair, and had to relearn many of her motor skills.

“I didn’t understand the extent of it all when I was first diagnosed. I thought cancer was something I’d go through, and I’d be back to normal right away,” she said.

Finally, in September 2006, Cassie returned to school — and went back with determination. She wanted to walk, literally and figuratively, with her graduating class.

She took on the extra load of classes and ended up graduating with honors, in the top 10 percent of her class. On commencement day, she left the wheelchair, the leg braces and the cane all behind and walked on her own to receive her high school diploma.

“It was amazing. That was the only thing I wanted,” Cassie said.

A change of plans

Nguyen, who grew up in Riverside, had originally dreamed of going to Yale. But she realized she wanted to stay close to her family. So she went to Riverside City College for five years, taking things slowly.

Nguyen transferred to UC Riverside in fall 2012. She continued her internship with the magazine, moving from an editorial position to a marketing one. While there, she helped promote an independent film by Think Ten Media Group.

“I learned the group worked with children and taught film classes,” she said. That inspired her: She decided to start a film instruction class for kids who have cancer.

Sparking joy for other young patients

Nguyen launched Spotlight on Hope, a free filmmaking camp for pediatric cancer patients. The program offers a retreat that gives children the opportunity to write, act, film and edit a movie they create.

She raised enough funds to offer film camps at UCLA during the 2014-15 school year. These have concluded, but Nguyen is working to continue and expand the program. She hopes to bring the film camp to UC Riverside and to create a nonprofit in order to expand the program nationwide.

Nguyen’s bubbly, contagious personality, ear-to-ear grin, and light-hearted attitude make it hard to imagine the physical struggles that have marked so much of her young life. So, too, does the long list of accomplishments she has amassed while fighting a devastating disease.

But Nguyen, who was awarded the a Humanitarian of the Year award in May 2015, said her illness has been a powerful motivator. She plans to pursue a career lobbying for health legislation, especially related to improving the lives, care and outlook for those with cancer.

“Being a cancer survivor enhanced the urgency of wanting to give back,” she said.