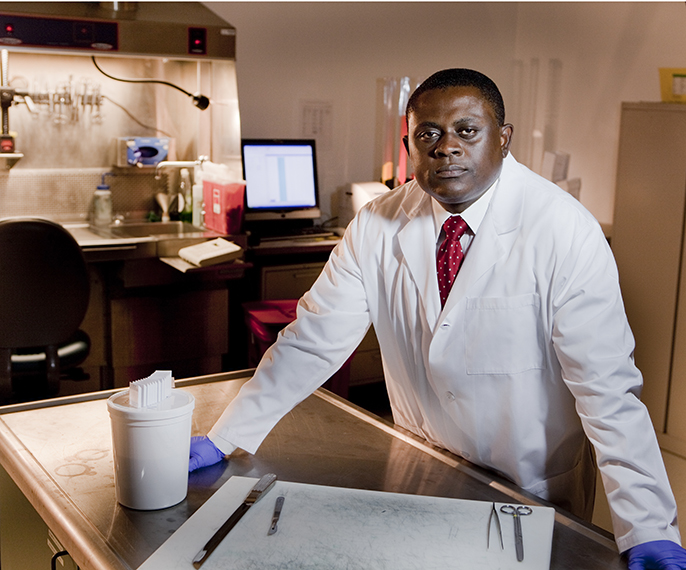 UC Davis pathologist Bennet Omalu was the first to report cases of chronic traumatic encephalopathy in professional football players; the story of his discovery is the subject of the upcoming movie “Concussion.”

As the most junior of his office’s five pathologists, Bennet Omalu had to work weekends. One Saturday in September 2002, he saw on TV that everyone was talking about a great football player who died unexpectedly at age 50: Pittsburgh Steelers Hall of Fame center Mike Webster.

“I went to work and, lo and behold, who was on my autopsy table? Mike Webster,” Omalu said. “I asked, ‘Who was Mike Webster?’ People looked at me like I was an extraterrestrial. It’s Pittsburgh, Pennsylvania, and he doesn’t know who Mike Webster is.”

Omalu, who grew up in Nigeria with little knowledge of American football, then conducted an autopsy that would change his life — and send shockwaves throughout the world of football with the finding of chronic traumatic brain injury.

Thirteen years later, the UC Davis pathologist finds himself again in the spotlight because of his diagnosis. On Dec. 25, “Concussion,” a major motion picture starring Will Smith, will be released. It focuses on the life and work of Omalu, the first to report cases of chronic traumatic encephalopathy (CTE) in professional football players, wrestlers, other high-impact contact sports athletes and military war veterans.

Omalu was born in Nigeria. At 26, after completing medical school and becoming a doctor, he left his country because of its corruption. He immigrated to the U.S., filled with youthful idealism.

Omalu became a pathologist in Allegheny County, Pennsylvania, and furthered his studies — earning an MBA at Carnegie Mellon University, master’s in public health from the University of Pittsburgh and four board certifications in pathology. His dad encouraged him to use his education to make a difference in people’s lives.

A Catholic who believes his dead patients still are alive in spirit, Omalu was disturbed by accounts about Webster’s problems — which ranged from debt to depression — and by what he saw during Webster’s autopsy.

“He was 50 years old. He looked much older — like he was in his 70s,” Omalu said. “I walked up to Mike Webster and said in my heart, ‘you look like you were sick. Guide me. I think you were a victim.’ I opened up his brain and got the shock of my life: Mike Webster’s brain looked normal.”

Frustrated, he investigated further. Looking at a slide of Webster’s brain under a microscope, Omalu saw amyloid plaques everywhere. It resembled what is seen in Alzheimer’s disease, although it was not exactly the pattern of Alzheimer’s disease.

“He is 50 years old. Why should I see these changes in his brain?” Omalu said. “I was ready to dig deeper. I spent six months with that brain.”

He reviewed the literature and found nothing there. He showed his results to colleagues. He thought this was a sentinel case. He named it chronic traumatic encephalopathy, or CTE.

“That was when professional football woke up from their slumber. They took notice,” Omalu said. But rather than rally around Omalu’s findings in a search for answers, the sport’s biggest boosters were angered by the implication that football was unsafe. “I was marginalized. I was ridiculed. People said on national TV that I was practicing voodoo.”

Stung by the criticism, Omalu published papers about the cases but wanted to stop his work in the field. He changed his mind after several football players contacted him and asked how to protect themselves from CTE.

Omalu and UCLA colleagues received funding to study five retired professional football players to help detect and track the disease in living people. Aided by a chemical marker called FDDNP, they used a brain-imaging tool to identify the abnormal tau proteins associated with this type of repetitive injury. A second study included 14 retired professional football players. They hope to do a phase three clinical trial.

While the majority of athletes with evidence of CTE have played amateur or professional football, the disorder also has been found in the brains of deceased soldiers who suffered traumatic brain injuries, as well as in hockey players, wrestlers and boxers.

“I have been vindicated,” said Omalu, who wants to see more research on CTE and hopes for a cure.

“UC Davis has given me the opportunity and support that I needed,” Omalu said. “They welcomed me and made me feel at home. I’m deeply, deeply grateful.”

Five years ago, Omalu got a call from someone who read his story and wanted to make a film with a major Hollywood studio.

“This is a once-in-a-lifetime opportunity,” said Omalu, who consulted on the movie, which has been his focus the past two years.

He gives high marks to “Concussion.”

“It’s a wonderful movie,” Omalu said. “The major objective of the movie is to highlight the need for education. When you make decisions regarding high-impact sports, you need to make an educated decision.”

Speakers include UC Davis associate clinical pathology professor Bennet Omalu, who first reported cases of chronic traumatic encephalopathy in professional football players; the story of his discovery is the subject of the upcoming movie “Concussion” starring Will Smith. Also hear from other UC Davis specialists at the forefront of brain-injury research, diagnosis and treatment. To RSVP, call (916) 734-9450 or email dpurvis@ucdavis.edu.