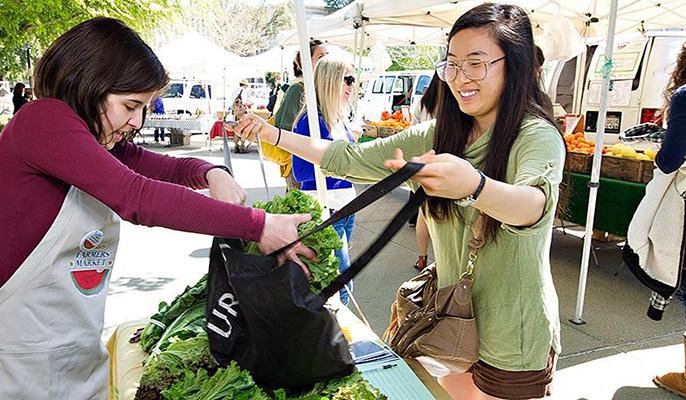 Farmers markets are one form of direct marketing.

Sacramento-area farmers and ranchers who sell their products directly to consumers generate twice as much regional economic impact per dollar of output as do area food producers who don’t engage in direct marketing, reports a UC Davis agricultural economist and a team of UC Cooperative Extension researchers.

The newly released study of the four Sacramento region counties of El Dorado, Placer, Sacramento and Yolo found that direct-marketing food producers had a regional output multiplier of 1.86 compared with just 1.42 for producers not involved in direct marketing.

“The direct marketers make up a relatively small part of the Sacramento region’s agricultural sector, but this study demonstrates that these food producers generate both economic and qualitative benefits for the region,” said study leader Shermain Hardesty, a Cooperative Extension agricultural economist in the UC Davis Department of Agricultural and Resource Economics.

“It’s important that the economic contributions of direct-marketing farmers and ranchers be taken into consideration so that regional policies can be enhanced to support and nurture the growth of these food producers,” Hardesty said.

The report, along with separate economic impact reports specifically for El Dorado, Placer and Yolo counties, is available online.

In the four-county Sacramento region, direct-marketing food producers are a relatively small segment of the total agricultural sector, accounting for 19 percent of the region’s farms and only 4 percent of its agricultural production.

The new study was based on economic information gathered from 88 local farmers and ranchers, including 31 vegetable farmers, 48 orchard or vineyard growers, and nine livestock producers, each of whom generated at least $1,000 in annual sales from marketing directly to consumers.

After the data were collected, they were incorporated into an economic modeling program to estimate the economic impacts of producers engaged in direct marketing.

Other findings from the report include:

Hardesty collaborated on the study with Libby Christensen, Erin McGuire, and Gail Feenstra, all of UC Davis; and Chuck Ingels, Jim Muck, Julia Boorinakis-Harper, Cindy Fake and Scott Onetto, all with the UC Cooperative Extension.

Funding for the study was provided by the University of California Division of Agriculture and Natural Resources Competitive Grants Program.