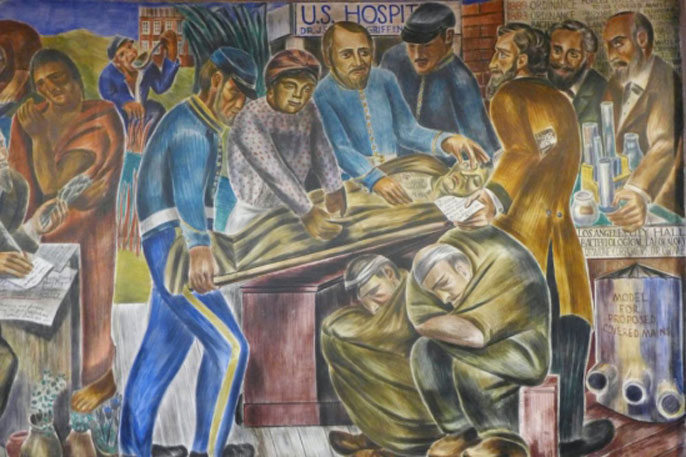 Laura Voisin George wasn’t looking for Biddy Mason, but there she was, it seemed, in the center of a Depression-era fresco in a lecture hall on the campus of UC San Francisco. A graduate student in history at UC Santa Barbara, Voisin George knew Mason worked as a midwife and assistant to Dr. John S. Griffin, whom she was researching for her Ph.D. dissertation.

The fresco is one of 10 panels depicting the history of medicine in California. They were completed in 1938 by Bernard Zakheim, a Polish émigré who was commissioned by UCSF, and they were paid with support from the WPA. It shows a Black woman working alongside a white physician as they tend to malaria patients. But is it Mason?

“From everything I read about Griffin,” Voisin George said, “he only had one Black female assistant, and that was Biddy.”

The recognition in the mural of a woman born a slave and who died a wealthy community icon would send ripples of awe and angst from the campus to Los Angeles and beyond. How it got to this is a tale of scholarship, the quirks of timing and the ghosts of history.

Mason’s journey is one of tenacity and bravery in the face of the cruelest obstacles. Born in Georgia in 1818, she would walk to Utah in 1847 with her owner, Robert Mayes Smith, who had converted to Mormonism. Four years later Smith would force her to walk to a Mormon settlement in San Bernardino.

But California was a free state, and she petitioned for, and won, her freedom in 1856. She worked as a nurse and midwife and went on to become a community leader and one of the first Black real estate investors in Los Angeles. In 1872 she became a founding member of First African American Methodist Episcopal Church, L.A.’s first Black church. She donated the land.

Fast forward to the 21st century. Voisin George is researching Griffin, a former Army surgeon who became a prominent land owner and who is credited with founding East Los Angeles in the 1870s. Through faculty at UCSB she learned that Kevin Waite, an assistant professor of history at Durham University in the U.K., had mentioned Griffin in his Ph.D. dissertation.

As it happened, Waite was then collaborating with Sarah Barringer Gordon, a professor of law and of history at the University of Pennsylvania, on “The Long Road to Freedom: Biddy Mason’s Remarkable Journey,” a book project for which they were seeking — and eventually received — a grant from the National Endowment of the Humanities.

After Voisin George attended a presentation on the project, Gordon and Waite invited her to join a team of collaborators for the work, which includes a website. The invitation paid off almost immediately.

Voisin George had seen a photo of the purported Mason mural and strongly suspected it was her. As it happened, Voisin George had studied the works of Viola Lockhart Warren, an author who focused on Griffin. In a series of articles on the surgeon, Warren included a photo of the mural. The catch: Even though Warren knew Mason worked with Griffin, she didn’t identify her in photo caption.

“So short of finding Zakheim’s assistant’s sketchbook with it saying, ‘This Black woman is Biddy Mason,’ this is as close as we’re going to get,” Voisin George said. “Someone who clearly knew about Biddy Mason passed the information to Lockhart Warren, who actually published it.”

Normally, this sort of academic mystery might pass with little attention. But then UCSF announced that its 103-year-old UC Hall, which houses Toland Hall Auditorium, where the murals reside, must be torn down and replaced because it no longer meets California's seismic codes.

That lent more urgency to the matter of saving the frescoes, which weigh as much as a ton each. Actively working on solutions for preserving the murals, UCSF is evaluating proposals for their removal and storage until they can safely be re-installed at a new location.

Voisin George, an architectural historian who has also trained in historic preservation, said she thought the best outcome would be for UCSF to preserve Toland Hall and incorporate it into the new building.

The San Francisco Historic Preservation Commission, in an Aug. 19 Zoom meeting, voted 7-0 to recommend the frescoes be granted landmark status. The Board of Supervisors will consider the matter at a later date.

Voisin George emphasized the historic significance of the frescoes and the importance of preserving them.

“This earliest-known representation of Biddy Mason is a positive portrayal amidst the murals’ diverse tapestry of California’s people,” Voisin George said. “Today she is a symbol of commitment and achievement for all that she overcame, with grace and generosity. Her motto was, ‘The open hand is blessed, for it gives in abundance, even as it receives.’

“Preserving these murals presents a considerable challenge,” she continued. "The Zakheim murals themselves are as much a legacy as what they portray, and they still give in abundance. I hope that they, and this depiction of Biddy Mason, are not lost."