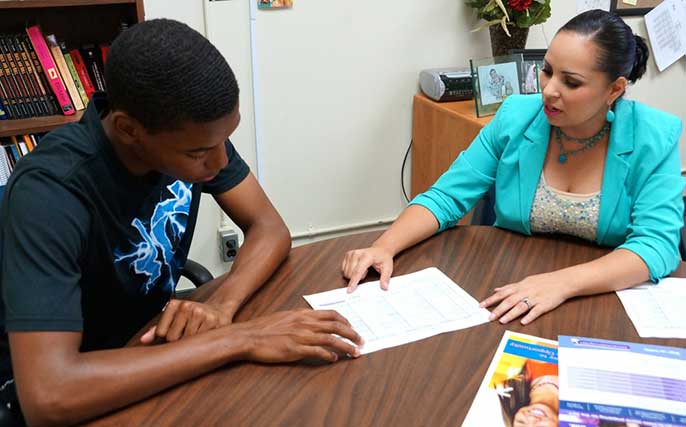 Griselda Sanchez-Pelayo, EAOP on-site college coordinator at Rio Mesa High School in Oxnard, has been providing guidance to students there for seven years.

EAOP offers other programs, including SummerUp, a UC grant providing online and classroom hybrid instruction to help students complete a full year of math in one summer session; a collaboration with the Research Mentorship Program to place EAOP students in an intensive six-week residential summer program at UCSB, working with the campus’s top researchers; and the Early Transfer Prep Initiative, funded by another UC mini-grant, which places many of the EAOP schools into the Transcript Evaluation Service.

When Adrian Palazuelos was a high school freshman in Oxnard, he approached a counselor, seeking career guidance. “I distinctly remember him telling me, ‘Hey, have you thought about being a mechanic?’ I was offended at first, because I knew my parents wanted much more for me. Mechanic is a phenomenal career, but they wanted me to push on.”

Another mentor in that same school — in a room next to the counselor — took Palazuelos aside and offered different advice. He helped launch the first-year high school student on a trajectory that took him to UC Irvine on a Regents scholarship, to graduate schools at Cal State Northridge and UCLA, and to the doctoral program at UC Santa Barbara’s Gevirtz Graduate School of Education.

Today, after several stops along the way as a teacher and principal, Palazuelos, who was the first in his family to go to college, is the new superintendent of the Fillmore Unified School District. “That individual who helped me get on this path in many ways replicated what the Early Academic Outreach Program does today,” he said.

Britt Ortiz, director of UCSB’s Early Academic Outreach Program (EAOP), is not surprised when he hears stories like this. When asked about the program, high school principals and students smile and eagerly talk about the guidance EAOP provides.

“If you really want to get into college,” said Sarai Sifuentes, a senior at Oxnard’s Rio Mesa High School who hopes to become a veterinarian, “join the EAOP program because it really prepares you for everything that’s coming.”

EAOP is a pre-college prep program sponsored by the University of California. The UCSB program currently serves seven high schools and more than 1,000 students from Fillmore to Oxnard and Bakersfield to Carpinteria. This fall, EAOP added three schools in the Santa Maria Union High School District as partnership schools.

Students can sit down every day with representatives from the University of California to discuss college placement tests, admissions requirements, financial aid possibilities and what to include in their personal statements for university applications, to name just a few of the services. In other words, pretty much everything students can expect at the various higher-ed institutions in the state.

Several years ago, one EAOP representative would rotate among three or four high schools in a region. But that changed in 2000 when Ortiz began the placement process for the first six college site coordinators at area high schools on a permanent basis.

As EAOP has evolved, so has the process for high school students to qualify for admission to a university — or even a community college.

“Approximately 60 to 70 percent of every school we serve is going to be community college-eligible,” Ortiz said. “We still need to work with those students intensively because the community college system has changed so much in last three to five years in terms of practices and procedures. So we used to tell students, ‘Don’t worry about it until the spring semester of your senior year,’ but we’re now approaching sophomores and juniors who will not complete the A-G requirements and getting them into a mindset and an academic approach toward a community college that it’s rigorous and becoming a very competitive process.”

A-G courses are the college prep requirements that students must complete to be eligible for the California State University (CSU) and University of California (UC) systems. Documenting the number of high school students who fulfill the A-G requirements is just one of the benchmarks of success for EAOP, according to Ortiz.

Due in part to the efforts of EAOP, there has been a 10-30 percent increase in the college-going enrollment rates for UCSB’s partnership high schools. In addition, schools that previously sent 60 percent of their graduating classes on to higher ed are now seeing rates in the 70-80 percent range, according to Ortiz.

“When we made the investment to have this program here, we got a whole bunch of benefits with it that we didn’t know we’d get,” said Gerardo Cornejo, principal at Carpinteria High School. “EAOP is an ingredient that provides the seasoning for what our students go through in four years. By having the EAOP counselor available, those students are getting access to resources they’ve never had before.”

At Rio Mesa, Principal William Dabbs sees a domino effect from having an EAOP coordinator on his campus. “It shows the students that we as a staff are serious when we talk about creating a college-going culture,” Dabbs said. “And if they see that we’re serious about it, they’re serious about it. Parents who might not have even considered sending their kids to college are being contacted by someone who can explain the benefits of going to college — and that it’s within reach.”

It’s all about “updrafting” students, according to Palazuelos.

“I’ve been in the position as a former principal to be able to see the benefits of having an on-site coordinator,” said Palazuelos. “I’ve also seen the disadvantages of not having that person there. What I see as a superintendent is that any time you can provide access for students to someone that can help them begin to chart their path, to someone who can help them begin the process of updrafting themselves into the more advanced courses, that helps serve as a catalyst to get students thinking about what it’s going to take for them to be competitive — competitive not only for applications but also the admissions process for the universities.”

It’s also about what kind of value Palazuelos gets from his investment in EAOP. “It’s the value of having that experience, the value of having folks that can provide thought leadership on the types of structures and innovations that will help more and more of our students be competitive for college admissions, and college completion,” he said.

For Griselda Sanchez-Pelayo, the EAOP on-site college coordinator for seven years at Rio Mesa, success is measured in the number of students who have gone on to two- and four-year colleges. In fact, Rio Mesa has one of the highest UC admit rates in its district.

“I’ll give you an example,” Sanchez-Pelayo said. “My first year there was a student here; she had no clue. She went through the process, went to Oxnard College, transferred to Cal, finished her master’s and now she’s a counselor. I received an email from this particular student, saying how grateful she is for the opportunities we were able to provide — that guidance.

Even though EAOP is a UCSB program, and Ortiz and the other on-site coordinators are employed by UCSB, they never specifically recruit students to become Gauchos. They’re all thinking about a much bigger picture. “I never recruit for UCSB,” Sanchez-Pelayo said. “I’m a UCSB grad, and the mission of the program is not to recruit for UCSB. The mission of the program is to prepare students for college and help them in the process to get there. It’s important for me to make that clear, so students can come in here and say: ‘I want to go to USC. I want to go to Northridge. How can we make that happen?’”