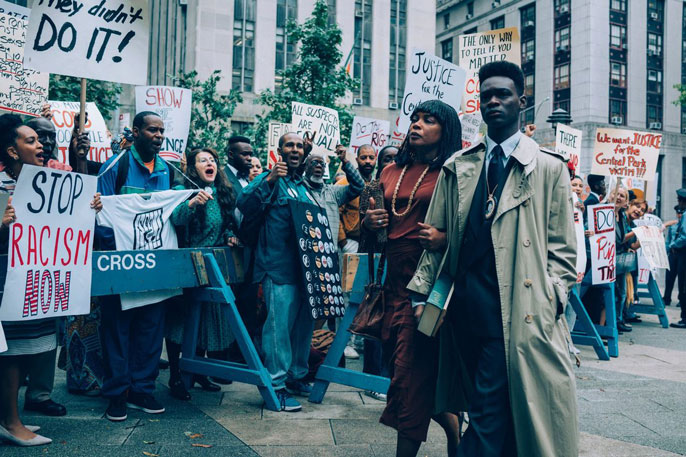 The Netflix limited series “When They See Us” was one of the top-rated digital programs of the 2018–19 season.

When it comes to gender and racial diversity in television industry jobs, the playing field continues to level for women and minorities, but there’s stubborn structural gridlock at the highest ranks and behind the camera.

Those are among the findings of the second part of the 2020 UCLA Hollywood Diversity Report, which focuses on broadcast, cable and digital programming for the past two television seasons. Part one, which was published in February, analyzed diversity in the movie business, and the authors concluded that the industry’s narrative on diversity was a tale of two Hollywoods. They write that the same is true in TV.

Women and minorities made gains in nearly all of the 13 television employment categories tracked by the report. But both groups still are not represented proportionately to their share of the U.S. population overall, even though audiences continue to show interest in programs whose casts, directors and writers represent the nation’s diversity.

“There has been a lot of progress for women and people of color in front of the camera,” said Darnell Hunt, dean of the division of social sciences in the UCLA College and a co-author of the report. “Unfortunately, there has not been the same level of progress behind the camera. Most notably in the executive suite, there has been very little change since we began compiling data five years ago. That’s very telling, particularly in light of our current racial reckoning.”

The report, which is compiled and published by researchers in the UCLA College social sciences division, tracks two seasons of scripted broadcast, cable and digital programming — 453 shows in 2017–18 and 463 shows in 2018–19.

In all other job categories reviewed in the report, men hold almost twice as many jobs as women and whites hold at least twice as many as minorities. Still, there are signs of continued, albeit slow, improvement. Of all lead acting slots on broadcast shows in 2018–19, people of color held 24.0 percent, almost a fivefold increase from 2011–12 when it was 5.1 percent.

The analysis found that the greatest racial and gender disparities are in behind-the-camera jobs such as show creator, writer and director:

“Just as with film, it’s those at the top of the television industry who have the most power to foster talent and invest in programming,” said Ana-Christina Ramon, a co-author of the report and director of research and civic engagement in the UCLA division of social sciences.

Now, Hunt said, a big question is whether the nation’s current racial reckoning will have a significant effect on the industry’s hiring practices in a way that will be apparent in next year’s report.

The report’s authors have tracked film and television diversity data since 2014, making the study the most comprehensive record of the industry’s progress on diversity hiring.

Each Hollywood Diversity Report has further established that audiences value and respond to diversity.

Social media engagement tends to be strong when casts are more diverse, too. Judging viewers’ activity on Facebook, Instagram and Twitter activity around scripted cable TV shows, figures spiked when the shows had majority-minority casts.

Among other findings in the report:

“Over time, work has been done to improve representation among certain groups — like Black actors in particular — but the near absence of Native Americans in these jobs is potent evidence that systems of racial erasure continue to exist,” Hunt said.