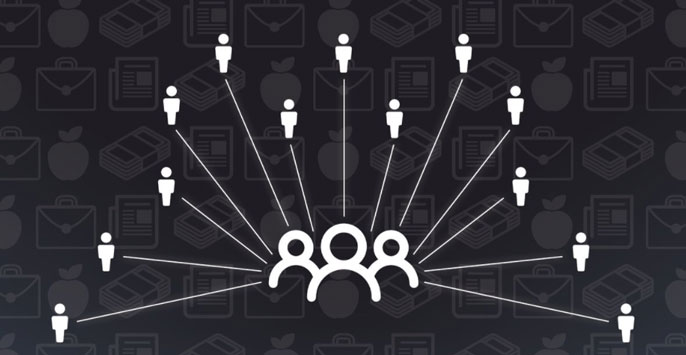 Image from professor Chris Benner's report, “Diversity and Inclusion for the 21st Century Economy: An Imperative for Chambers of Commerce."

For the American economy to prosper, it must be diverse and inclusive, UC Santa Cruz Professor Chris Benner tells business leaders in a new report written in collaboration with the University of Southern California and the Association of Chamber of Commerce Executives.

“America is changing,” opens Benner in “Diversity and Inclusion for the 21st Century Economy: An Imperative for Chambers of Commerce,” a paper co-authored with long-term collaborator Manuel Pastor, a UC Santa Cruz alumnus and former UC Santa Cruz professor now with the University of Southern California.

The face of small business is shifting. From 2007–2012, Latino-owned businesses in the U.S. grew by 34.5 percent and African American-owned enterprises grew by 46.3 percent. A quarter of all new businesses were started by immigrants.

What is now a trend will soon become the norm. As soon as 2040, 49 percent of the U.S. workers will be African American, Latino, Asian Pacific Islander, Native American, and self-identified multiracial. By 2050, America is expected to become majority-minority, a demographic shift driven by natural growth, not immigration.

'Business as usual' no longer enough

For business leaders and metropolitan chambers of commerce, a “business as usual” approach is no longer enough, Benner and Pastor say.

“Chambers can no longer think of inclusion as an afterthought,” Benner says, pointing to his previous research that shows cities that foster education and economic equity fare better fiscally.

Economic benefits of integration difficult in a divided America

But this is increasingly difficult for business leaders and chambers. As America grows more diverse, people are increasingly sorting themselves by ideological and political beliefs. For example, in 1992, only 20 percent of American voters lived in a county where a presidential candidate won by a landslide. In 2016, it was a staggering 57 percent.

This homogenous sorting is also reflected in the media where information is filtered algorithmically along partisan lines. Communication is now so customized that “unwanted” news gets filtered out without audiences knowing.

Facts — which Benner notes are vital to policy-making — are no longer basic and generally agreed upon.

“Unchallenged by opposing perspectives, we are increasingly drifting apart at exactly the moment in which we need to know and grow together,” Benner says.

But these difficulties also provide opportunities for chambers.

Chambers of commerce presented with opportunity

As business leaders, chambers are uniquely positioned to connect community and cultivate collaboration. They are also seasoned at relationship building and have a strong sense of roots in the region.

For example, Benner and Pastor point to Greater Reading, PA, where the county chamber created a new initiative where women from diverse backgrounds can network with each other through a leadership series, in a mentorship program, and in regular roundtables that address the challenges faced by female business owners. They also offer a Latina focused meeting as well.

Another example Benner and Pastor offer is in South Carolina where the Greenville Chamber launched the Minority Business Resource Collaborative to support minority businesses upstate. The group’s goal is to leverage the power as a collective by sharing knowledge and skills with the aspiration for economic development, business growth, job creation, and wealth creation.

In sum, chambers must play a civic role as well as an economic one if they are to remain relevant to a changing entrepreneurial landscape.

But diversity work is hard, Benner and Pastor warn.

“This work is not for the faint-of-heart. A bumpy process is to be expected as making changes to accommodate our inevitable demographic and economic shifts is not easy and can involve substantial conflict,” they say.