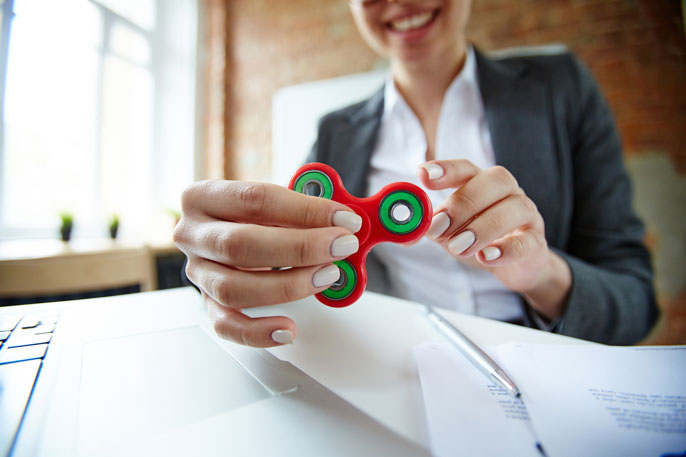 You’ll find them in nearly any department store or gas station: Fidget spinners, fidget cubes, and other devices designed to help you focus. There’s no scientific evidence about whether they work, but that’s about to change, thanks for a new study by researchers at UC Santa Cruz and the UC Davis MIND Institute.

“We need science to weigh in on whether these devices can help, and how,” said Julie Schweitzer, professor of psychiatry and behavioral sciences at the UC Davis MIND Institute and the lead investigator on the project. “ADHD is associated with lower income, job instability, higher substance abuse and accident rates, and more.”

Schweitzer said anxiety surrounding COVID-19 and working or attending school from home is a challenge, and the study has implications for how fidget devices might ease anxiety as well as increase focus.

“People are expected to be paying attention to virtual meetings for hours, and anything you can do to help improve people’s attention, alertness and emotional regulation could be helpful,” added Schweitzer.

The research team is recruiting 110 adults with Attention Deficit Hyperactivity Disorder (ADHD). Participants will perform attention and memory tasks and be shown film clips to evoke an emotional response. The team will study natural physical movements, or fidgeting, in addition to giving some participants a specially designed “smart” fidget ball developed at UC Santa Cruz to squeeze, stroke, or tap.

The fidget ball — a silicon skeleton with a soft fabric cover — will measure each of those movements using internal sensors. The data are transmitted in real-time to a computer for analysis.

“The sensors measure not only when someone touches them, but how much pressure is used,” said co-investigator Katherine Isbister, a professor of computational media at UC Santa Cruz’s Baskin School of Engineering whose team created the device.

The study participants will also be videotaped and hooked up to an electrocardiogram device. “We’ll be looking at whether there are physiological effects as well, such as changes in heart rate variability,” said Schweitzer. “We’ll be able to see when and how they use the ball, connect that with the physiology, and determine whether it’s working for them.”

Another unique aspect of the study is its use of machine learning, an area of artificial intelligence, or AI, to analyze results. Using the data from the study, an AI program should be able to predict what fidget ball behaviors are effective and recommend fidgeting strategies as possible therapies. Co-investigator Daniel Shapiro, an adjunct professor of computational media at UC Santa Cruz, is developing the approach.

“Our end goal is really audacious,” said Schweitzer. “Eventually, we’d like to mass produce fidget devices that interact with a smart watch that would give the individual cues to let them know it was time to tap or squeeze the ball to help modulate their attention or emotions.”

Schweitzer’s previous research showed that fidgeting, without a device, improved cognitive function in children with ADHD. “It’s a paradigm shift,” said Schweitzer. “My theory is that hyperactivity is actually an unconscious coping mechanism, so instead of trying to get adults and kids with ADHD to sit still, we can use this behavior to help people function better.”

Now the goal is to see whether adding the fidget ball could be even more helpful, and perhaps less disruptive to others. “If we can help people by improving their attention and cognitive skills, as well as regulating their emotions, that would be pretty awesome,” she said.

The study is funded by a grant from the National Institutes of Mental Health.