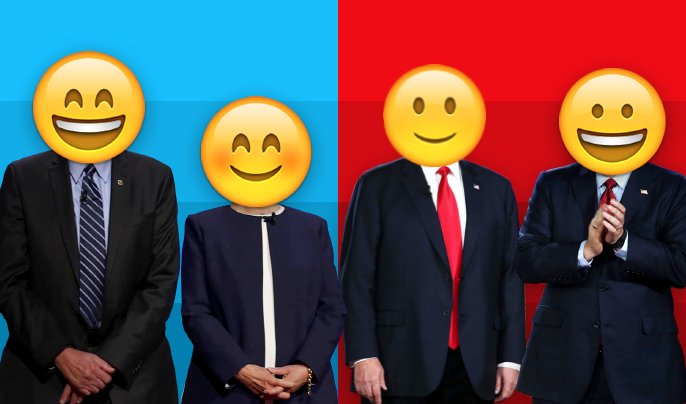 U.S. election fever is running hotter than ever, and the presidential candidates are busy making big promises, hoping to convince voters that their approach is best.

Each side is selling a vision of a happier, brighter future. Which raises the question: Is one ideology or another more likely to make people happy? And if so, should that translate into how people vote?

“You can see why political types would be interested in this question,” said UC Irvine’s Peter Ditto, “because they want to make the inference that their ideology is the road to happiness.”

Earlier research into the question has found a consistent pattern: conservatives as a whole report being happier than liberals do.

“It's an interesting phenomenon that's called the ‘Ideological Happiness Gap,’ that's shown up in many different studies,” said Ditto.

But before you assume that means conservatives actually are happier – hold on.

Are you happy, or do you just look that way?

“The problem,” said Ditto, “is that all of the earlier studies were based on self-report.”

Ditto, who leads UC Irvine’s Hot Cognition Lab, has made a career of studying human judgment and biases. One of the subjects that his lab studies is self-enhancement: the tendency to think of oneself in overly positive terms, particularly when compared to others.

On employee self-evaluations, nearly everyone rates themselves as above average. Ditto and colleagues found the same is true with happiness: Most people think that they're happier than the average person.

To Ditto’s former graduate student Sean Wojcik, now a research scientist for Upworthy, this proved that alternative methods were needed to get to the heart of true happiness.

“There is no perfect, objective way to measure someone's happiness, which is why most scientific research on happiness relies on self-reports,” said Wojcik.

But there are other ways to assess happiness in people that aren’t so prone to self-enhancement bias, including some new big data approaches.

In a paper published in Science last year, Wojcik proposed an alternative explanation for the supposed Happiness Gap: it may not be that conservatives actually experience greater feelings of happiness than liberals, but rather that they are more self-enhancing and more likely to exaggerate their own happiness.

Wojcik backed up this conclusion with multiple lines of evidence.

In one study, he looked for happiness-related behavior among one very clearly divided group of conservatives and liberals: Congress. Looking both at positive and negative emotional language over 18 years in the Congressional Record – more than 432 million words in all – Wojcik found that Democrats used a significantly higher frequency of positive words in 17 out of the 18 years.

Words are nice, but a photo is worth a thousand of those. Analyzing smiles from publicly available photos of members of Congress, Wojcik found that increased conservatism was associated with a decrease in smiling and predicted significantly less intense facial action in the muscles around the eyes, known as an indicator of genuine happiness. Liberal politicians, on the other hand, tended to more frequently express positive emotional language, such as smiling more intensely and more genuinely.

Moving outside the political sphere, Wojcik analyzed nearly 50,000 Twitter posts from self-identified liberal and conservative members of the general public. Mirroring the other studies, posts by conservatives were significantly less likely to contain positive emotion words and even happy emoticons.

Wojcik's studies found a general pattern: conservatives only appeared happier on self-report measures, in which their stronger self-enhancement tendencies were likely at play. The Happiness Gap, if it exists at all, isn't very wide, and even favors liberals when you look at behavior.

“Do we now want to argue that liberals are happier? No,” said Ditto. “I don't think the two sides are very different in happiness – they just manifest it in different ways.”

Is self-enhancement a bad thing?

The finding that conservatives are more self-enhancing could be used by liberals as a way to attack conservatives, particularly in an election year where authenticity has emerged as a key factor for voters. But both Ditto and Wojcik are quick to point out that self-enhancing behaviors have some legitimate upsides.

“There is a whole literature in psychology that suggests that being self-confident and having what are often referred to as ‘positive illusions,’ seeing the world as better than it is, is a really functional way to be,” said Ditto. “It's very helpful in lots of life's pursuits. It keeps you persisting at tasks, even when they're difficult. It makes you tend to promote good social relationships.”

Yet there are limits to the benefits of self-enhancing behaviors, and while they can be beneficial in one context, they can be problematic in others.

Self-enhancing behavior, particularly as it grades into narcissism, can be alienating and unproductive in leaders. Earlier research found that self-enhancers are magnetic leaders at first, but this effect wears off over time – sometimes quite quickly. In addition, self-enhancers are less receptive to feedback, and have limited capacity learn and improve.

“It’s still an open question as to whether self-enhancement actually contributes to happiness or simply reports of happiness,” said Wojcik. “If you really believe you’re above average, you feel pretty good about it – but it could have harmful social effects.”

Answering who’s happier is only a piece of a larger question: can (and should) we adopt policies that maximize happiness?

“People get tempted to use happiness data in public policy. This group is happier, therefore we should favor the values of the happier group,” said Wojcik. “This seems great in theory, but I’d be very cautious about interpreting happiness data this way.”

If there is a difference in happiness between liberals and conservatives, it may come down to how – and when – you ask the question.

“In an election year with a sitting Democratic president, you would expect Republicans to have more anger in their speech – but this may not be the overall pattern,” said Wojcik.

Happiness at the personal level may differ from happiness at a national level as well. While conservatives report greater levels of happiness, left-leaning countries consistently rank higher on happiness indices. Cultural differences undoubtedly affect the interpretation of happiness data: what makes one group happy, may make another miserable.

Governing towards happiness still seems like a noble goal, but perhaps the answer doesn’t lie in political beliefs.

For more UC research on politics and human cognition, check out the Fig. 1 video "How morals influence if you're liberal or conservative" featuring Peter Ditto below:

Inside the mind of a researcher
Fig. 1 explores new ideas and research out of the University of California — ranging from science, technology, art and humanities.
Subscribe to Fig. 1