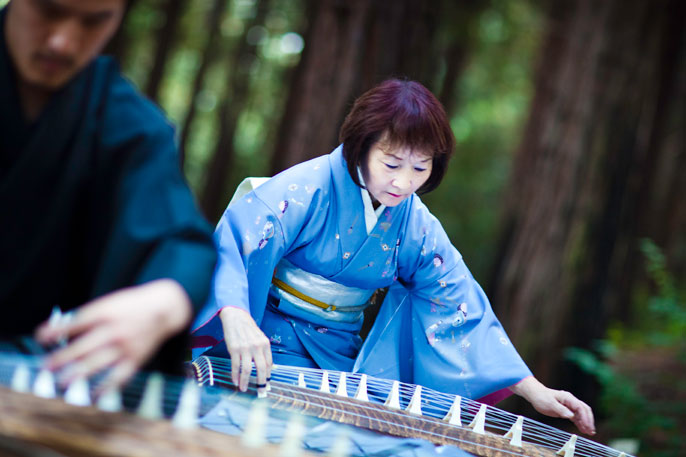 Shirley Muramoto, accompanied by her son, Brian Mitsuhiro Wong, plays the koto during a performance at UC Berkeley’s Botanical Garden.

The twist in Shirley Muramoto’s personal narrative came when, as a teenager, she discovered how her mother, aunt and grandparents had spent the years after the bombing of Pearl Harbor on Dec. 7, 1941.

“I asked my mom where she learned how to play the koto,” a 6-foot, 13-stringed zither the Public Affairs staffer — better known on campus by her married name, Wong — now teaches and plays professionally herself. “And she’d say, ‘Oh, I learned in camp.’ And I said, ‘Wow, what a progressive summer camp you went to, to be teaching a Japanese instrument like this.’ I really didn’t hear what that camp was until I was in high school.”

What it was, in fact, was a concentration camp. Muramoto’s mother had spent her preteen years as one of more than 120,000 Japanese Americans, two-thirds of them U.S. citizens, rounded up by order of Franklin Roosevelt following Japan’s attack and confined at one of 10 relocation sites, politely referred to as internment camps. (Roosevelt himself called them “concentration camps.”) The revelation sent Muramoto, then a student at Oakland High, scrambling to learn about what was still a near-taboo topic. After her grandfather found her engrossed in a book on the camps — only a few had even been published at the time, she says — he broke his own long silence, sharing recollections of the family’s incarceration, first in Topaz, Utah, and later at the high-security Tule Lake “segregation center” in Northern California’s Modoc County.

Muramoto’s mother and grandmother, she recalls, were amazed to hear him speak about the camps. What amazed Muramoto — and launched her on a decades-long quest to locate survivors and document their stories — was the idea that traditional Japanese music, theater and dance, which had languished as second-generation Nissei embraced American pop culture, actually flourished behind the barbed wire.

“I was looking for books, or anybody who had talked about it or written about it, and I couldn’t find anything,” she says. “So I just started doing it myself.”

The fruits of her search will soon be on display in "Hidden Legacy: Japanese Traditional Performing Arts in the WWII Internment Camps," a documentary Muramoto is still working to complete, and which includes the “summer camp” reminiscence above. She’s midway through an Indiegogo crowdfunding campaign to raise some of the $60,000 or so she needs to put the finishing touches on the film and cover copyright costs. She also hopes to create a website where she can post interviews that don’t make the final cut, and where other camp survivors will be able to recount their own experiences.

A rough cut will get its first public screening Saturday, April 5, at the Japanese American National Museum in Los Angeles, and a Bay Area PBS station has expressed interest in helping with the production and broadcasting it within the next few months.

“I’ve been pretty much living and breathing this project the past few years,” says Muramoto.  In fact, she started applying for grants more than a decade ago — she did get a sizable Japanese American Confinement Sites grant from the National Park Service — and she’s traveled the country to raise awareness and flush out people who lived in the camps. Toward those ends, she staged a pair of public events several years back, one each in Los Angeles and San Francisco, in which seven dancers and musicians performed and discussed their experiences. All seven appear in the film, along with a dozen others.

“The arts helped them to survive,” says Muramoto, a Berkeley alum who regularly plays her koto at campus events, notably the annual memorial service, and on less solemn occasions has been known to pluck out a mellifluous version of the Cal fight song.

Ironically, she explains, the forced relocations slammed the brakes on assimilation for vast numbers of patriotic Japanese Americans, giving them not just proximity to practitioners of traditional Japanese arts, but the leisure time — for many, the most they’d ever known as adults — in which to study and practice themselves.

“Everything was taken away from them — their homes, their livelihoods, everything that they’d worked for,” she says of those in the camps. “The only thing they couldn’t take away from them was their culture.”

The proof of that is the filmed testimony of the musicians, dancers and theater artists, mostly women, who share poignant, sometimes surprisingly upbeat memories of their time as prisoners of a country they and their families had embraced as their own — either as immigrants or, more often, as native-born, second- or third-generation U.S. citizens.

The renaissance of traditional Japanese culture was a family affair. Even first-generation Issei who weren’t artists, Muramoto says, found ways to help: “They drew beautiful backdrops for the stages, they made wigs out of rope and black Shinola polish, they grew daikon white radish to carve into masks with papier mâché — they did all this stuff to be able to be a part of all that. So it wasn’t just doing the arts. It was the things that went with it, too.

“It was a way to keep yourself busy,” she says, “and to make you feel better about yourself.”

For those too young to appreciate the politics of internment, the camps were where they learned to perform Noh drama, sing, dance or play the koto — and, as Muramoto’s mother would, instill their culture in later generations of Japanese Americans. (Muramoto would eventually teach her son Brian to play the instrument as well.)

“The young people had fun,” admits one woman interviewed in the film. “It’s kind of bad to say ‘good old days,’ but it was. I had a good time.”

Adds another: “The camp days were terrible, and yet at the same time it gave me a lot of strength.”

For Muramoto, her decades of research into the camps — and her efforts to document how thousands of Japanese Americans, imprisoned for nothing more than their ethnic heritage, managed to keep their culture alive — have been their own source of strength.

“It’s finding out more about my history — my grandparents, what they went through,” she says. “To understand the context of how that all fit in makes me feel a little more at peace with myself.”