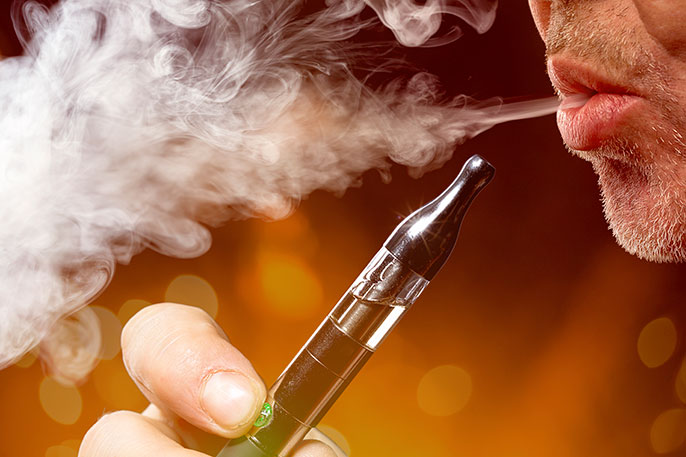 The study — a systematic review and meta-analysis of published data — is the largest to quantify whether e-cigarettes assist smokers in quitting cigarettes.

The findings will be published online January 14 in The Lancet Respiratory Medicine.

“As currently being used, e-cigarettes are associated with significantly less quitting among smokers,” concluded first author Sara Kalkhoran, MD who was a clinical fellow at the UCSF School of Medicine when the research was conducted. She is now at Massachusetts General Hospital and Harvard Medical School.

In 2015, the U.S. Preventive Services Task Force concluded that there was insufficient evidence to recommend the devices to help adults quit smoking. No e-cigarette company has submitted an application to the U.S. Food and Drug Administration to approve e-cigarettes for smoking cession, and the FDA has not taken any action against companies that claim e-cigarettes are effective for quitting smoking.

In their analysis, the UCSF team reviewed 38 studies assessing the association between e-cigarette use and cigarette cessation among adult smokers. They then combined the results of the 20 studies that had control groups of smokers not using e-cigarettes in a meta-analysis that concluded that the odds of quitting smoking were 28 percent lower in smokers who used e-cigarettes compared to those who did not.

There were no language restrictions imposed on the studies, which included both real-world observational as well as clinical studies. The studies included smokers who both were and were not interested in quitting, and included people as young as 15 years old.

The studies included in the analysis controlled for many variables, including demographics, past attempts to quit, and level of nicotine dependence.

"The overall effect is less, not more, quitting"

“The irony is that quitting smoking is one of the main reasons both adults and kids use e-cigarettes, but the overall effect is less, not more, quitting,” said co-author Stanton A. Glantz, Ph.D., UCSF professor of medicine and director of the UCSF Center for Tobacco Control Research and Education. “While there is no question that a puff on an e-cigarette is less dangerous than a puff on a conventional cigarette, the most dangerous thing about e-cigarettes is that they keep people smoking conventional cigarettes.”

“The fact that they are freely available consumer products could be important,” Glantz added.

E-cigarette regulation has the potential to influence marketing and reasons for use, the authors wrote: