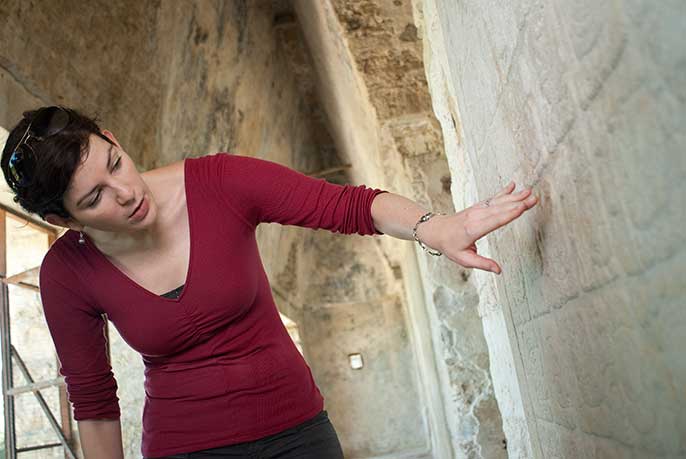 By the time of her death in 1458 B.C., Egypt’s Pharaoh Hatshepsut had presided over her kingdom’s most peaceful and prosperous period in generations. Yet by 25 years later, much of the evidence of her success had been erased or reassigned to her male forbears.

Even after 20th-century archaeologists began to unearth traces of the woman who defied tradition to crown herself as king, Hatshepsut still didn’t get her due, a UCLA Egyptologist argues in a forthcoming book.

“She’s been described as a usurper, and the obliteration of her contributions has been attributed to a backlash against what has been seen as her power-grabbing ways,” said Kara Cooney, the author of “The Woman Who Would Be King: Hatshepsut’s Rise to Power in Ancient Egypt.”

In the mainstream biography, due Oct. 14 from Crown Publishing, Cooney sets out to rehabilitate the reputation of the 18th dynasty ruler whom she considers to be “the most formidable and successful woman to ever rule in the Western ancient world.” To find a parallel, Cooney argues, one has to look to Empress Lü of third century B.C. China, Elizabeth I or Catherine the Great.

“Hatshepsut’s story needs to be carefully resurrected and her modus operandi needs to be dissected and analyzed in a more fair-minded way,” said Cooney, an associate professor of Near Eastern languages and culture in the UCLA College. “I see her as a person who created her position based on her ability to do the job rather than her desire for it.”

An expert in Ancient Egyptian funerary practices, Cooney has participated in several excavations in Egypt and is known for her scholarship on later dynasties. She also has a track record of making ancient Egypt accessible to the general public. She served as co-curator of the 2005 exhibition “Tutankhamun and the Golden Age of the Pharaohs” at the Los Angeles County Museum of Art. In addition, she worked on two Discovery Channel documentary series: “Out of Egypt,” which first aired in 2009, and “Egypt’s Lost Queen,” a 2006 profile of Hatshepsut.

For the first biography of Hatshepsut in English by an Egyptologist in 20 years, Cooney distilled generations of research based on the little surviving evidence from the era — carvings in stone walls, murals and the contents of tombs.

Cooney illuminates the difficult position into which Hatshepsut was born. The lone daughter of one of ancient Egypt’s most successful warrior kings — Thutmose I — she lived in a society in which the crown was passed from father to son and royal children were expected to marry their siblings. Hatshepsut was groomed from birth to rule as queen beside whichever brother became crown prince, and she was trained to assume the role of the kingdom’s highest priestess — or wife of the god Amen.

After the deaths of both of her brothers, Hatshepsut married a sickly half-brother, who was crowned Thutmose II when their father died. Despite intense pressure to produce a male heir, she bore just one surviving daughter. So after Thutmose II died when Hatshepsut was about 16, a baby boy born to a member of his harem was selected to succeed him. Normally, Cooney writes, the baby king’s mother would have served as regent, but Thutmose II’s mother was low born and lacked the leadership training that had been poured into Hatshepsut since birth.

“The risk in a succession crisis of this kind was that a strong man — some kind of warlord with political and military backing — could take over, and the dynasty would switch to another family,” Cooney said. “But Hatshepsut was smart, skilled and strategic enough to support a baby and make sure that baby was educated and prepared to take the throne and continue the success of her dynasty.”

So, following a revelation in which Amen picked her to rule, Hatshepsut ended up taking over as regent — and never stepped aside.

When Thutmose III was seven or eight, Hatshepsut made the unusual move of crowning herself king, and she shared the role with Thutmose III for the rest of her life. Only two other women had previously served as pharaoh, and both for much briefer periods than Hatshepsut’s reign, which would last some 21 years. (Cleopatra came much later and ultimately was not successful in continuing her dynasty.)

Cooney shows how Hatshepsut gained support for her unorthodox position among Egypt’s religious community through such tactics as professionalizing the priesthood and bankrolling impressive temples like her Temple of Millions of Years, located at Deir el Bahari in present-day Luxor.

Something of a branding genius, Hatshepsut underscored her authority in an unprecedented quantity of inscriptions on temple walls and statuary, including stunning obelisks that for the first time explicitly linked the power of sun worship with that of an Egyptian ruler. Cooney shows how Hatshepsut further endeared herself to her kingdom’s ecclesiastic and wealthy elite by showering them with luxury goods obtained through an ambitious expedition to Punt, probably somewhere in present-day Eritrea.

Cooney also details the advantage Hatshepsut enjoyed by breaking with tradition in entrusting talented outsiders instead of courtiers from elite families who might have put their family’s interests ahead of crown or kingdom. Contrary to past speculation, however, Cooney contends that Hatshepsut’s relationships with her leading advisor, Senemut, was purely professional and not romantic.

Eventually, Hatshepsut either adopted the attire of a male pharaoh — including going shirtless and sporting a beard — or at least directed that she be depicted that way in temple carvings and statuary. Prominent examples of those depictions were excavated in broken pieces in the 1920s; now restored, they are on view at New York’s Metropolitan Museum of Art.

Where historians have seen a usurper, Cooney shows how Hatshepsut could not have succeeded without the support of her kingdom’s elites, who likely had just as much at stake as she did in the duration of the Thutmose dynasty, Cooney argues.

As for the coronation, Cooney speculates that it may have followed a health scare or some other threat to Thutmose III’s ability to carry out his duties.

“Maybe she communicated to her elites something like, ‘I need to formalize my position as your leader, and you need that, too.’ And everybody looked at her and agreed, ‘Yes, we need it to be real,’” Cooney said.

The masculine shift in depictions of Hatshepsut started around the time Thutmose III reached his late teens, Cooney points out. She believes the move was intended to spare the young buck from looking like he was taking orders from a woman. Whether or not that’s true, the archeological record has produced no evidence of strife between the co-kings, Cooney writes. In fact, stone reliefs often portray them as twins, ruling in unison.

“A true usurper acting out of greed and lust for more power would have removed all impediments to her sole authority,” Cooney points out.

While the fate of Hatshepsut’s daughter, Nefrure, remains murky, Cooney contends that she probably lived longer than commonly thought. However, Nefrure — like her mother — never bore a crown prince, although she likely married Thutmose III.

Long after Hatshepsut’s death, Thutmose III chose a low-born son to succeed him. Cooney argues this likely explains the campaign to eradicate evidence of Hatshepsut’s achievements or assign them to males in the royal line that she shared with Thutmoses III and his heir.

“For whatever reason Thutmose III chose a son as the crown prince who was not connected to the core of the royal family; his mother was a nobody,” Cooney writes. “So Thutmose III needed to remove the idea that the female bloodline mattered at all. And Hatshepsut was in the way.”

Perhaps the book’s boldest claim is that the campaign to obliterate Hatshepsut’s achievements could be the strongest measure of her success.

“Throughout history, the women who have tended to be remembered are those for whom it all goes wrong — Jezebel, Cleopatra and Boudica,” Cooney said. “Either they’re greedy, they try and fail in a heroic way, or they want to have sex with all of these men as their avenue to power. But Hatshepsut can’t be remembered for anything lascivious or any feminine weakness. She continued a successful dynasty for her family, and she did it so well that it was easy to remove her because everyone wanted to take credit for the amazing things she did.”