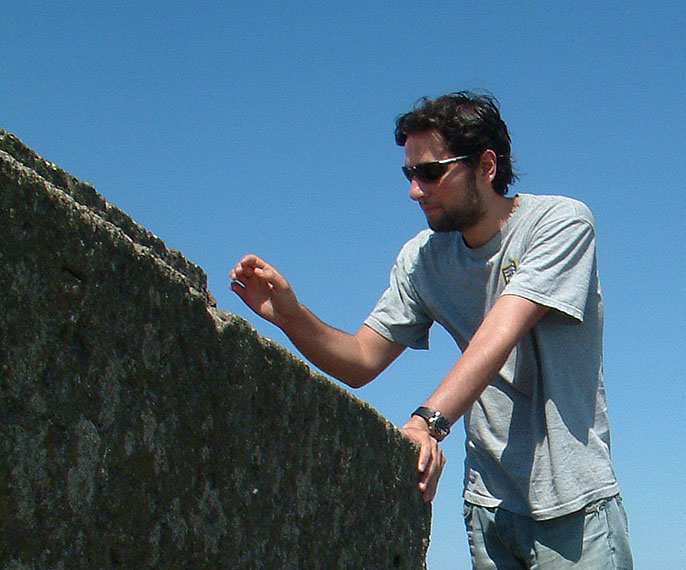 Grad student Eliot Crafton searches for non-native species at a reinforced coastline along the Baltic Sea.

Picture a young man seated on the deck of an old wooden sailing ship, a whaling vessel made of white oak, yellow pine and hemlock, built in 1841, the last of its kind. He is reading — what else? — "Moby Dick."

“In the classroom, 'Moby Dick' would still be a wonderful book, but at the Mystic Seaport, you got to live the book,” says UC Davis graduate student Eliot Crafton. His love of the ocean eventually led him to the Bodega Marine Laboratory, where he is developing a tool that will anticipate — and possibly prevent — the arrival of new invasive marine species.

From zebra mussels and marine snails to algae and other aquatic plants, invasive non-native species wreak havoc on coastal ecosystems and fishing economies around the world by forcing out native life and disrupting the natural order. The U.S. alone spends more than $120 billion annually in efforts to control invasive species.

International trade and global climate change are both accelerating the problem.

“Everything is global now, but the problem of invasive species is particularly global,” Crafton says. “Every bit of research shows that the more trade increases, the more invasive species are transported, especially in marine ecosystems."

Organisms enter new environments by hitching a ride on container ships. Often they are transported from their native habitats in ballast water, which is then discharged when cargoes are off-loaded. Others attach themselves to hulls of ships, and spread once they arrive at a new port.

Crafton hopes to stem the tide of alien invaders with a computer-based tool that will help regulatory agencies anticipate where invasive species are most likely to gain a foothold, so they can take protective measures in advance.

The tool that uses statistical modeling to assess which species might arrive in a specific location, and whether they will be able to survive in the new environment. “This tool gives us something we can do now to prevent further degradation of coastal environments,” Crafton says.

“It will predict not only under current conditions, including current shipping patterns, but you can plug in future conditions: climate change and economic projections. For example, if you create these new ports, how will that influence the risk associated with invasions?

Invasive species are often small creatures, such as clams or algae, but they pose enormous problems.

The zebra mussel, for instance, is an unprepossessing native of southern Russia. It was first spotted in the Great Lakes in 1988. Scientists believe it came in through the ballast water in ships.

Zebra mussels out-compete native mussel species and are poisonous to birds. Along with those environmental impacts, there are economic costs: As zebra mussels spread, they have damaged harbors, waterways, ships, water treatment facilities and even power plants. The cost of controlling the mussels in the Great Lakes alone is estimated at $500 million annually.

With new port construction at an all-time high around the world, Crafton foresees similar problems unfolding  in coastal areas from Turkmenistan to Cuba. Climate change, which alters wildlife habitat, is expected to accentuate the problem.

"The U.S. historically has taken a reactive approach,” Crafton said.  “But once a species is established, it can be difficult and expensive to get rid of them. Sometimes it’s not possible.

"If we can prevent new species from arriving, we can avoid the extraordinary costs of maintaining ecosystems.”

Crafton, a recipient of a National Science Foundation fellowship, also is teaching Tomales Bay public school students to explore scientific questions about marine environments based on their own observations — much the way Crafton forged his own career.

After graduating from Williams College in Massachusetts, he taught environmental education to children in the San Francisco Bay Area and did environmental restoration for the Golden Gate Parks Conservancy. Crafton came to Davis on a recommendation from his mentor, marine biologist Jim Carlton.

Part of the attraction was the chance to apply his research to creating solutions to real world problems.

Crafton is especially concerned with minimizing the ecological impacts that occur as a result of human activity. It’s a concern, he points out, shared by his inspiration, Herman Melville, writing nearly 200 years ago about the fate of the buffalo.

“Though so short a period ago — not a good lifetime — the census of the buffalo in Illinois exceeded the census of men now in London…  at the present day not one horn or hoof of them remains in all that region. The cause of this wondrous extermination was the spear of man.”