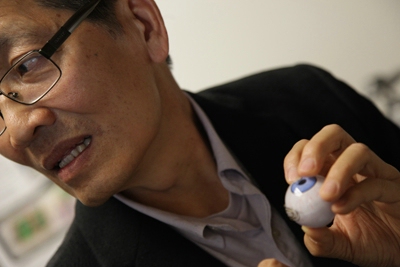 For UCLA bioengineering professor Wentai Liu, more than two decades of visionary research burst into the headlines last month when the FDA approved what it called “the first bionic eye for the blind.”

The Argus II Retinal Prosthesis System — developed by a team of physicians and engineers from around the country — aids adults who have lost their eyesight due to retinitis pigmentosa (RP), age-related macular degeneration or other eye diseases that destroy the retina’s light-sensitive photoreceptors.

At the heart of the device is a tiny yet powerful computer chip developed by Liu that, when implanted in the retina, effectively sidesteps the damaged photoreceptors to “trick” the eye into seeing. The Argus II operates with a miniature video camera mounted on a pair of eyeglasses that sends information about images it detects to a microprocessor worn on the user’s waistband. The microprocessor wirelessly transmits electronic signals to the computer chip, a fingernail-size grid made up of 60 circuits. These chips stimulate the retina’s nerve cells with electronic impulses which head up the optic nerve to the brain’s visual cortex. There, the brain assembles them into a composite image.

Recipients of the retinal implant can read oversized letters of the alphabet, discern objects and movement, and even see the outlines and some details of faces. And while the picture is far from perfect — the healthy human eye sees at a much higher resolution — it’s a breakthrough for people like the first patient, a man in his 70s who was blinded at age 20 by RP, to receive the implant in clinical trials. “It was the first time he’d seen light in a half-century,” said Liu, adding that “it feels good as the engineer” to have helped make this possible.

Liu joined the Artificial Retina Project in 1988 as a professor of computer and electrical engineering at North Carolina State University. The multidisciplinary research project was funded by the U.S. Department of Energy’s Office of Science because it envisioned a potential pandemic of eyesight loss in America’s aging population. Leading the project was Duke University ophthalmologist and neurosurgeon Dr. Mark Humayun, now on faculty at USC. He tapped Liu to engineer the artificial retina.

“I thought it was a great idea,” Liu said. “But I asked, ‘What can I do?’ because I didn’t know much about biology.” Humayun handed him a six-inch-thick medical manual on the retina. “The learning curve was very steep,” Liu recalled with a laugh.

However, Liu’s fellow engineers questioned his sanity. “I was working on integrated chip design and had just gotten tenure when I signed on to this project. They said, ‘You’re crazy!’ But I’m glad I made that choice, getting into this new field.”

At the time, bioengineering was in its infancy, when areas where biology, medicine and engineering intersected were still uncharted territory. Computer chips were quite large compared to today’s chip, and the batteries required to operate them were even larger; cell phones, for instance, were the size of bricks. Yet Liu and his cohorts dared to imagine an electrical device small enough to be implanted in the delicate physiological environs of the retina.

This advanced the research and posed even more questions: “Now we were asking, ‘How can we design a system to produce electrical stimulation? How fast should the current be, how often and how long should it last?’”

A close look at retinas damaged by RP — the photosensitive layer of rods and cones is destroyed, but neurons and muscle remain intact — prompted another hypothesis: “If we could build a device that sits [near the neurons] and sends a signal, maybe we could make those neurons fire,” Liu thought. “The firing neurons can send signals back to the brain, and the brain might be able to recognize them [as sight].

“There were so many parts we didn’t know,” said Liu, looking back on two decades of biological, medical and engineering experiments by researchers trained in different disciplines who sometimes couldn’t understand each other. “It’s kind of difficult because medicine and engineering don’t always speak the same language. We had to work to know each other.” 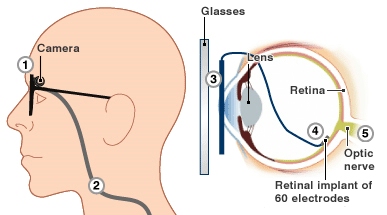 The retinal implant, picking up signals from a camera in a pair of sunglasses, sends electronic impulses up the optic nerve to the brain, which assembles them into an image.
Courtesy of Doheny Retina Institute, USC[/caption]

Every new discovery by researchers in one discipline would be a steppingstone to new work by researchers in another. “It was kind of a loop. We would give them something, and they would give us something back. It was a typical engineering process,” said Liu, who took his work on the project with him when he joined the faculty at UC Santa Cruz in 2003. Near the end of 2011, he came to the UCLA Henry Samueli School of Engineering and Applied Science.

These days when visitors inquire about his work, Liu pulls a toy eyeball out of his coat pocket and points to a tiny, round battery glued to an area over the retina — his modest approximation of the computer chip he conceived. The Argus II technology is now available to patients through the company Second Sight, which helped the DOE fund the research. One patient, Barbara Campbell, shared her experience in a New York Times video story when the FDA gave the device a green light.

Liu continues to advance the technology. In collaboration with an international research group funded by the National Science Foundation, Liu and a team of UCLA engineering graduate students are testing two prototypes that increase the microchip density to 256- and 1,026-microchip versions that they hope to squeeze down into the size of the 60-microchip version. The more microchips you have, the higher the resolution of the resulting image.

With sharper vision, the patient’s quality of life would be improved, Liu said. Eventually, the ability to see colors will be added, said Liu. He’s also exploring how to put the camera inside the eye, too.

Liu’s research has moved well beyond his original focus. “The more I work on this, the more interested I become in understanding how the brain works,” he said. His lab is also working on devices to stop epileptic seizures, to help people who have lost their ability to speak and to re-activate facial muscles paralyzed by Bell’s palsy.

“We’re engineering hope,” Liu likes to say. “Some things you can’t cure, but in almost every problem in the human body, engineering can intervene to subdue or mediate the process or even restore function.

“My father always wanted me to be a doctor, but I chose engineering,” said Liu, whose parents were illiterate, as was everyone else in the small village in Taiwan where he was born.  “Now I realize I’ve come full-circle, working with colleagues in medicine to help people.”