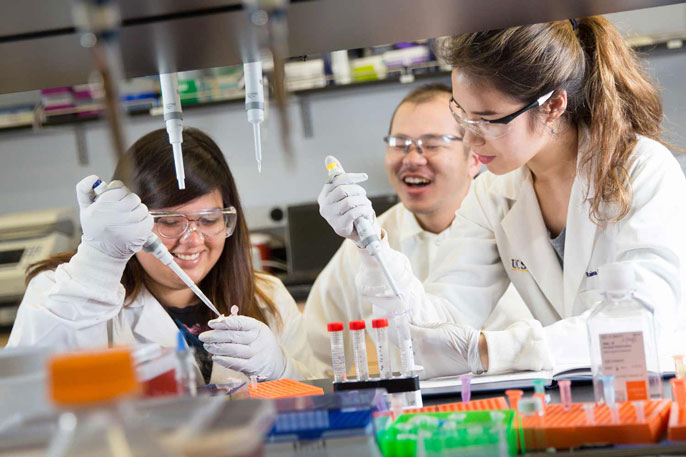 A team of engineering students has a cancer-fighting idea up its sleeve — and the sleeve is nanoscale.

The idea is based on a new cutting-edge research tool called DNA origami in which scientists literally fold the molecules of life into two- and three-dimensional shapes. The UC San Diego team plans to compete in Harvard's BIOMOD 2017 competition — a molecular design competition for undergraduates.

Researchers have already proven that DNA origami works by folding the genetic material into shapes such as stars, smiley faces — and even a bunny. However, the UC San Diego students are not folding DNA for aesthetics alone. They are breaking the double-stranded DNA formations found in nature to create molecular structures in which they hope to hide cancer drugs — like a Trojan horse.

The students are incorporating folic acid — a protein that is upregulated in cancer cells — into the DNA to target the cargo to cancer cells.

“Researchers all over the world are exploring the applications of DNA origami in fields like therapeutics and bioelectronics. We’re applying it to targeted drug delivery,” said Raina Borum, a fourth year nanoengineering major and the team lead for the project.

The team chose to design a “sleeve”—think Christmas stocking—to carry the hidden cargo. But the shape isn’t what makes the design unique.

“What’s really unique about our project is that we are incorporating folic acid — a small molecule that is upregulated in cancer cells — into the sleeve of DNA to target the cargo to the cancer cell,” said Borum. Folic acid is a molecule that scientists look for when determining the presence of cancer. The further along a cancer is, the higher the density of the folic acid receptor on the cell surface.

The students believe that by weaving folic acid into the DNA sleeve, the cargo will be taken up exclusively by cancer cells. And, since DNA is a naturally occurring substance in cells, it won’t be rejected.

Because double-stranded DNA is made up of complementary nucleic acid base pairs, scientists have figured out how to deliberately position small “staple strands” of DNA alongside a longer scaffold strand and cause it to self-assemble into two- and three-dimensional nanostructures.

Knowing that DNA is negatively charged, the students hypothesize that it will bind tightly to a positively charged nanoparticle incorporating the cancer drug.

The team is competing in BIOMOD, a molecular design competition hosted by Harvard that has generated impressive results in the past. Previous winners have used DNA, RNA, and proteins as building blocks to create autonomous robots, molecular computers, and prototypes for nanoscale therapeutics.

The UC San Diego team’s goals are just as big, if not bigger.

Alejandro Alva, a fourth year nanoengineering major, joined the team because of complications with his scoliosis surgery. “During the summer between my sophomore and junior year of high school, I underwent a scoliosis repair surgery. The surgery left me with nerve damage and two spinal cord injuries. I became determined to change this for future generations and wanted to push myself to study a newer and more cutting-edge field of engineering. I hope to one day invent ways to make surgeries less invasive and ease the replacement of lungs or other organs. I joined this team in order to get exposure to the field of nanomedicine and begin my journey to better the lives of others.”

For Borum, the project has been a highlight of her time at UC San Diego.

“Being a part of this team has been incredibly empowering,” she said. “I’m surrounded by students with polished communication skills and extensive backgrounds in medical and nanoscale engineering. To now call them my friends is even more special.”

And for another student on the team, it means keeping a promise.

“I made a promise to my mom when I came here that I would help cure diseases,” said Hamid Razavi, a transfer student from Iran majoring in nanoengineering who is also on the team. “When I heard about this project, I knew I could keep that promise.”