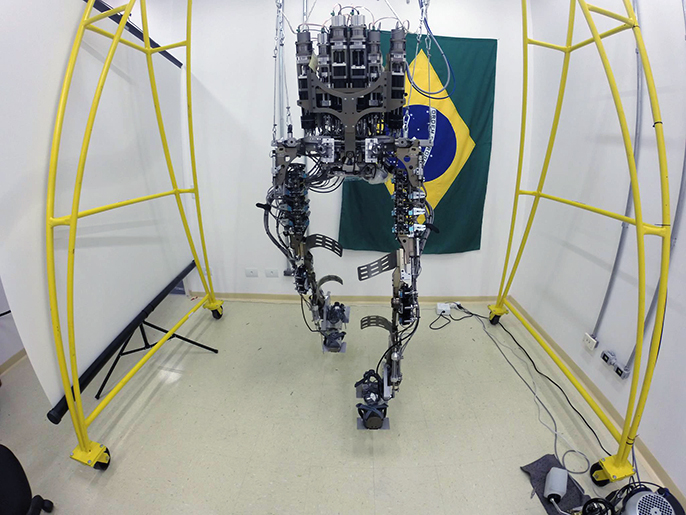 The WalkAgain Project's thought-controlled robotic exoskeleton will make its public debut at the World Cup in Brazil.

On June 12, if all goes well, a paraplegic young adult will take a few steps and kick a soccer ball — at the opening ceremony of the FIFA World Cup in São Paulo, Brazil, in front of a global audience of billions. It will be a showcase demonstration of the WalkAgain Project, which aims to develop a thought-controlled robotic exoskeleton for everyday use for the disabled.

Sanjay Joshi, professor of mechanical and aerospace engineering at the University of California, Davis, is playing a key role on the project, which is led by Dr. Miguel Nicolelis of Duke University and supported by the Brazilian government. Joshi coordinates the international team building the control systems that take weak electrical impulses from the user's brain and muscles and turn them into action by the robotic exoskeleton.

"The idea behind the project is to show the state-of-the-art in combining neuroscience, robotics and rehabilitation. The idea behind the World Cup demonstration is to inspire kids around the world to become scientists, engineers and doctors." Joshi said.

The "controls team" has to work with both physicians and engineers to connect the human with the machine, Joshi said.

Since Nicolelis asked Joshi to join the team a little over a year ago, he and UC Davis graduate student Kenneth Lyons have been on a crash program coordinated across three continents.

Controlling machines with the brain

The call came after several years' work by Joshi and his graduate students on devices that could enable disabled persons to control machines.

Joshi began his career working on spacecraft robotics for NASA, but after arriving at UC Davis in 2001 he became increasingly interested in using robots to address biological problems, including animal behavior research and human/machine interfaces.

In 2007, he began a project with Professor Tony Wexler, Department of Mechanical and Aerospace Engineering, on systems to allow disabled children to use computers. That work was later funded by The Hartwell Foundation and the National Science Foundation.

A sabbatical year in 2010 as a visiting professor in the Department of Neurology at Columbia University in New York was a particularly big influence.

"It was an amazing experience to work with neurologists who study epilepsy and stroke," Joshi said. "It's a very different perspective when you see how research is done in a hospital."

Roboticists have been inspired for a long time by how the human brain controls its own body, Joshi said, so it's a natural progression to look at how the brain can control robotic devices.

The devices in Joshi's work pick up tiny electrical signals from muscles or the brain to operate. Researchers and physicians have made progress in developing prosthetic limbs and exoskeletons that can be operated by disabled people. However, these efforts are mostly used in rehabilitation, and in a controlled environment.

A significant challenge, Joshi said, is to get such systems to work reliably in everyday use, with more electronic "noise" to interfere with the tiny signals from user's brain and muscle activity.

Among the projects developed in the UC Davis lab are small wireless robots that are controlled by a disabled person moving a cursor on a screen (Video: Watch a demonstration), a TV remote that can be operated by a person with quadriplegia, and a robotic arm in a lab in New York operated by a person in the lab at Davis.

One of the volunteers helping in the lab is Adam Shapiro. A spinal cord injury 16 years ago left Shapiro with limited movement of his arms and legs. While he hasn't been directly involved with the WalkAgain project itself, he has helped Joshi's lab develop their ideas and technology.

"A friend of mine told me about this lab, and I participated and they saw that I could contribute to what they were doing here because of my experience of being in a wheelchair," said Shapiro, who graduated from UC Davis with a bachelor's degree in clinical nutrition in 2012.

With electrodes over a muscle behind his ear, Shapiro can move a cursor on a tablet and direct a small robot. He doesn't consciously flex the muscle to generate the signal: Part of the work is learning how to make the muscle produce a signal, while thinking a command, such as "turn left."

"It's very exciting, especially for people who have more of a disability and can't move their arms or legs at all. To be able to do things for yourself is very powerful," Shapiro said.

Technology for the disabled

The WalkAgain exoskeleton will use a cap of electrodes to pick up signals directly from the brain — electroencephalography, or EEG, as well as muscle signals. A team of neurologists and rehabilitation physicians is working with disabled volunteers in Brazil to train them to operate the exoskeleton with their thoughts. Users have to learn how to generate the signals that control the exoskeleton and to use it to walk. Essentially, they have to learn to walk all over again.

Technology like the WalkAgain Project, Joshi's research and other projects around the world hold huge promise for the disabled.

Other partner institutions involved in the WalkAgain Project include: Technical University of Munich, Germany; the Swiss Federal Institute of Technology in Lausanne; the Edmond and Lily Safra International Institute of Neuroscience of Natal in Brazil; the University of Kentucky; and Colorado State University.