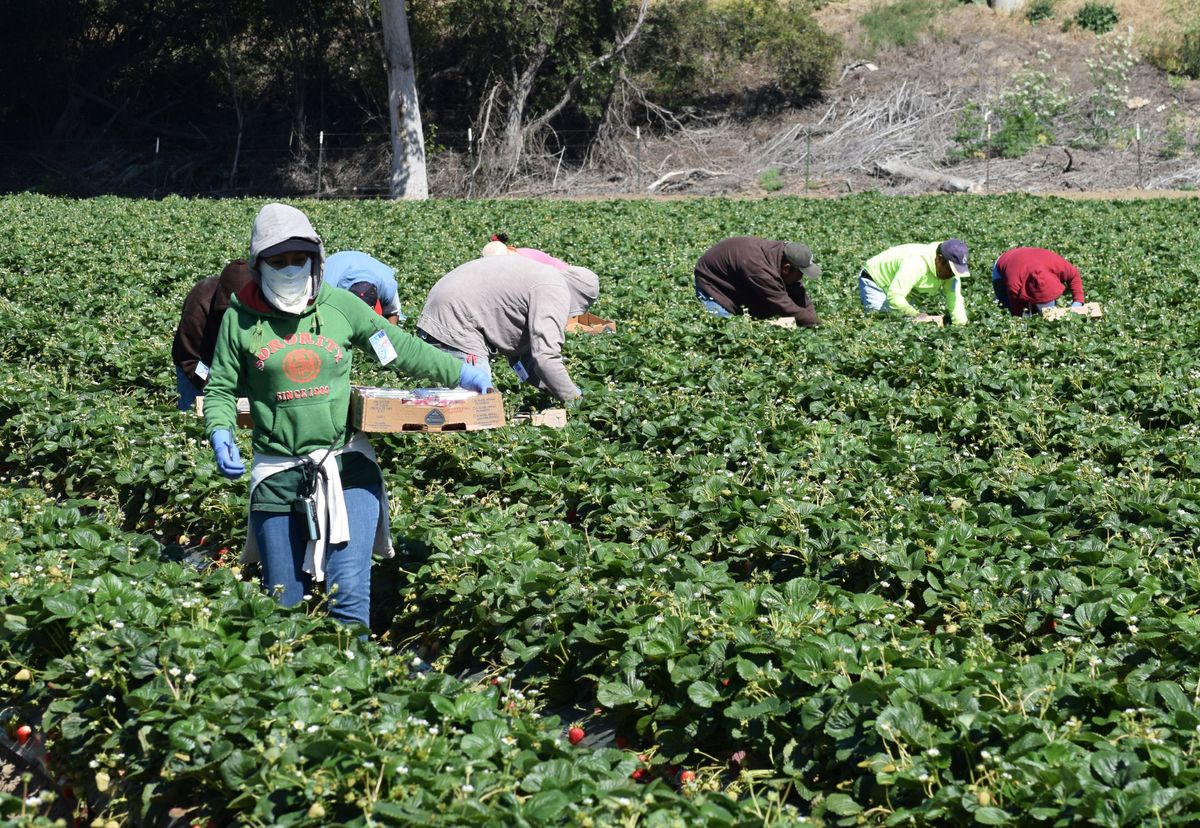 Agricultural workers in Salinas. The study found that undocumented workers and their families contributed more than $1.6 trillion to the nation’s gross domestic product in 2018 through their shopping and workforce activities.

A UCLA study published Aug. 10 found the exclusion of undocumented residents and their families from the $1,200 stimulus payments given to taxpayers a result of the COVID-19 pandemic resulted in a loss of $10 billion in potential economic output.

The study is a collaboration among the UCLA Latino Policy and Politics Initiative, the UCLA North American Integration and Development Center and the UCLA Institute for Research on Labor and Employment. Its publication comes as California and federal officials are considering further economic relief plans in response to the pandemic.

The study found that undocumented workers and their families contributed more than $1.6 trillion to the nation’s gross domestic product in 2018 through their shopping and workforce activities, and their reduced purchasing power amid a looming recession is both a public health and economic crisis, said Raul Hinojosa, the report’s lead author.

“Our undocumented neighbors buy groceries, pay taxes and support local businesses in economic activity that generates $190 billion in government revenue nationwide,” said Hinojosa, a UCLA professor of Chicano studies and the executive director of the North American Integration and Development Center. “It is cruel to deny undocumented residents financial assistance as unemployment rates skyrocket, but it’s also counterproductive fiscal policy that has negative consequences for all Americans who benefit from their economic contributions.”

The national unemployment rate for undocumented workers reached 29% in May, much higher than the rate for any other demographic group.

“Undocumented workers have suffered disproportionate health and economic impacts during this global health crisis that we are just beginning to understand yet they are being excluded from critical policy relief discussions and we need to address this through a comprehensive approach to economic recovery,” said Abel Valenzuela, director of the Institute for Research on Labor and Employment and a member of the study’s research team.

The study found that the economic benefits of including undocumented workers in future relief efforts would outweigh the costs. The economic activity generated by undocumented immigrants spending the tax credits they would receive under the HEROES Act, currently being debated in Congress, would support 112,000 jobs nationally and produce $14 billion in economic output — which would far exceed the $9.5 billion price tag of including them in recovery efforts.

“Undocumented workers are fundamental to our economy, especially during the pandemic when many of them are the essential workers who are keeping us fed, safe and healthy,” said Sonja Diaz, founding director of the Latino Policy and Politics Initiative. “It would be only fair to recognize their contributions by including them in recovery efforts, and it is also clear that we cannot rebound from this crisis if we leave them behind.”

The study concludes the following policy proposals would accelerate economic recovery nationwide and in California: