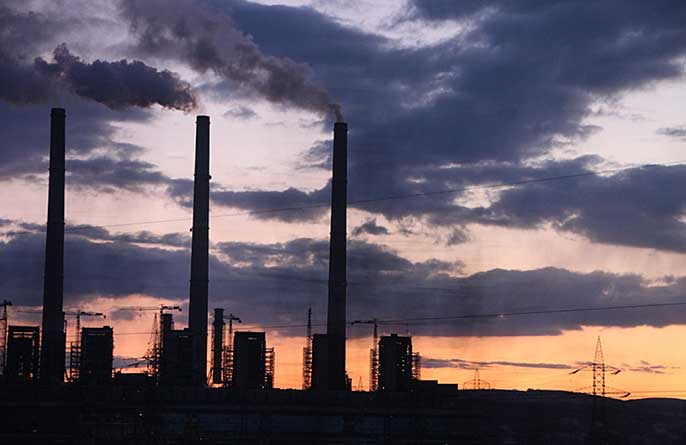 Existing power plants around the world will pump out more than 300 billion tons of carbon dioxide over their expected lifetimes, significantly adding to atmospheric levels of the climate-warming gas, according to UC Irvine and Princeton University scientists.

Their findings, which appear Aug. 26 in the journal Environmental Research Letters, are the first to quantify how quickly these “committed” emissions are growing — by about 4 percent per year — as more fossil fuel-burning power plants are built.

Assuming these stations will operate for 40 years, the power plants constructed globally in 2012 alone will produce about 19 billion tons of CO2 during their existence, the researchers project.

“Bringing down carbon emissions means retiring more fossil fuel-burning facilities than we build,” said Steven Davis, assistant professor of Earth system science at UC Irvine and the study’s lead author. “But worldwide, we’ve built more coal-burning power plants in the past decade than in any previous decade, and closures of old plants aren’t keeping pace with this expansion.”

“Far from solving the climate change problem, we’re investing heavily in technologies that make the problem worse,” he added.

According to the study, the CO2 emissions that will come from existing power plants represent a substantial portion of the emissions budget that would keep global temperatures from warming more than 2 degrees Celsius relative to the preindustrial era — the current international target.

Power plants now operating in the U.S. and Europe account for about 11 percent and 9 percent of committed emissions, respectively, but these commitments have been steady or declining in recent years. Increasing worldwide commitments, therefore, reflect the rapid growth of China’s power sector since 1995, as well as new facilities in such developing countries as India, Indonesia, Saudi Arabia and Iran. Plants in China and India represent 42 percent and 8 percent of committed future emissions, respectively.

About two-thirds of these emissions from the power sector are due to coal-burning stations. The share of commitments related to natural gas-fired generators — which emit less CO2 per unit of energy than coal — has escalated from about 15 percent in 1980 to 27 percent in 2012, as more such plants are being put into use. Davis and co-author Robert Socolow of Princeton suggest the findings could be used by policymakers to evaluate the long-term climate impacts of current investments in infrastructure.

“We’ve been hiding what’s going on from ourselves: A high-carbon future is being locked in by the world’s capital investments,” said Socolow, professor emeritus of mechanical & aerospace engineering. “Current conventions for reporting data and presenting scenarios for future action need to give greater prominence to these investments. Such a rebalancing of attention will reveal the relentlessness of coal-based industrialization, long underway and showing no sign of abating.”