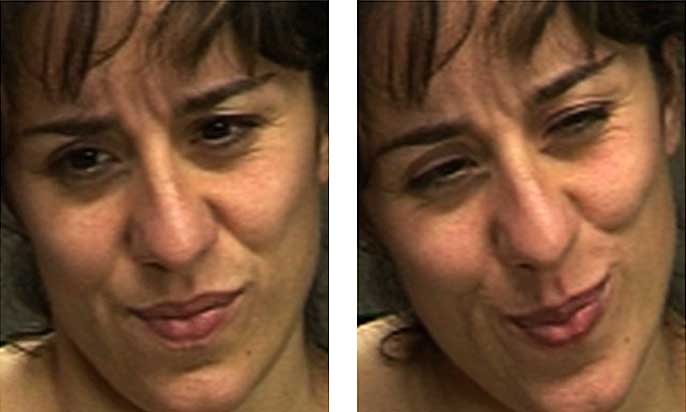 Which expression do you think shows real pain? Attempts to fake expressions of pain typically involve the same facial muscles that are contracted during real pain. There is no telltale facial muscle whose presence or absence would indicate real or faked pain. The difference is in the dynamics. See end of story for the answer.

The work, titled “Automatic Decoding of Deceptive Pain Expressions,” is published in the latest issue of Current Biology.

Senior author Kang Lee, professor at the Dr. Eric Jackman Institute of Child Study at the University of Toronto, said “humans can simulate facial expressions and fake emotions well enough to deceive most observers. The computer’s pattern-recognition abilities prove better at telling whether pain is real or faked.”

The research team found that humans could not discriminate real from faked expressions of pain better than random chance — and, even after training, only improved accuracy to a modest 55 percent. The computer system attains an 85 percent accuracy.

“In highly social species such as humans,” said Lee, “faces have evolved to convey rich information, including expressions of emotion and pain. And, because of the way our brains are built, people can simulate emotions they’re not actually experiencing – so successfully that they fool other people. The computer is much better at spotting the subtle differences between involuntary and voluntary facial movements.”

“By revealing the dynamics of facial action through machine vision systems,” said Bartlett, “our approach has the potential to elucidate ‘behavioral fingerprints’ of the neural-control systems involved in emotional signaling.”

The single most predictive feature of falsified expressions, the study shows, is the mouth, and how and when it opens. Fakers’ mouths open with less variation and too regularly.

“Further investigations,” said the researchers, “will explore whether over-regularity is a general feature of fake expressions.”

In addition to detecting pain malingering, the computer-vision system might be used to detect other real-world deceptive actions in the realms of homeland security, psychopathology, job screening, medicine, and law, said Bartlett.

“As with causes of pain, these scenarios also generate strong emotions, along with attempts to minimize, mask, and fake such emotions, which may involve ‘dual control’ of the face,” she said. “In addition, our computer-vision system can be applied to detect states in which the human face may provide important clues as to health, physiology, emotion, or thought, such as drivers’ expressions of sleepiness, students’ expressions of attention and comprehension of lectures, or responses to treatment of affective disorders.”

Photo: The image on the right shows genuine pain.