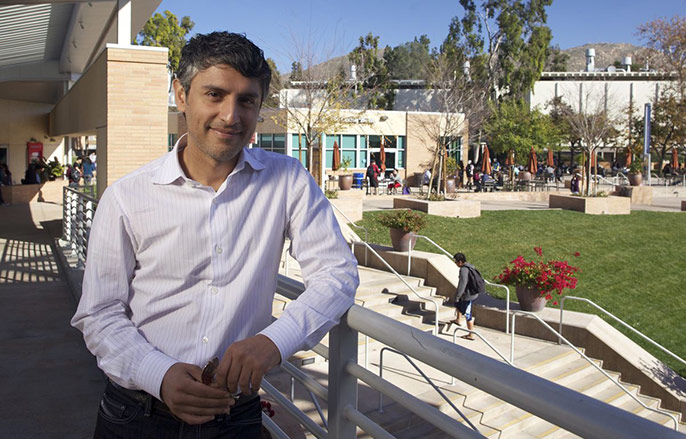 Reza Aslan gives a talk at UC Riverside about Islamophobia in the United States.

Islamophobia. You may have heard the word before. But, what does it mean exactly? Reza Aslan, professor of creative writing at the University of California, Riverside, defined it as “a bigotry against Muslims,” to a room full of people at the university on Monday (April 13).

In a lecture titled “Islamophobia: The Real Enemy,” he explained how and why the fear of Islam exists in the United States. Aslan took us back to 2001, and said it’s easy to assume Americans harbor an anti-Muslim sentiment because of the September 11 attacks. As Aslan explains that’s not exactly the case, because there’s been a rise in Islamophobia since 2001. “The further we got away from 9/11, the higher the anti-Muslim sentiment grew, so something else must be going on — there must be another reason,” Aslan explained.

That reason, he said, comes down to  consistent and biased anti-Muslim messages that trickle down and become talking points for the media, and politicians during election season. “All of this becomes a self-fulfilling prophecy,” Aslan said.

The result of those reports is obvious — hatred and violence toward Muslims. He recalled a period when there were eight violent attacks against mosques in the span of 11 days. And explained if we were to swap the word mosque with church or synagogue, there would be a massive outrage, a revolution. So why doesn’t it shock the general public when mosques are attacked? Because it’s become normal for us, he said.

When you look at the facts, Aslan explained, negative views of Muslims are far from the truth. Poll, after poll, after poll shows Muslims are the least tolerant of violence, have the highest level of education and income among religious groups in the U.S., and are highly assimilated, yet they aren’t portrayed that way.

“Bigotry is not the result of ignorance. I would love to say the answer is education, and knowledge, but that doesn’t work in changing people’s mind,” Aslan said. Though, you can lay out the numbers for Americans, and try to educate folks on the truth about Islam — it doesn’t work, it doesn’t change anyone’s mind. What does? Aslan ended his talk explaining that building relationships is the answer — the key for change.  “When you have a relationship with someone, it’s hard to hate them,” he said.

The barrier will be broken through art, stories, relationships, and even sitcoms. Take one example Aslan gave "Will & Grace." The general public realized that being gay didn’t make someone less of a person. People built a relationship with the characters they saw on TV, and soon there was a shift in the U.S. — folks began accepting homosexuality, he said.

Throughout American history there has been the “other,” the enemy. But with time, that enemy becomes accepted: Catholics, Jews, the LGBT community – and we only see that shift after we start building relationships with the “other,” Aslan explained.

Aslan challenged Muslims and non-Muslims alike and asked the audience this question “What kind of America do we want to live in?”

He holds a B.A. in religion from Santa Clara University, a Master of Theological Studies from Harvard in world religions, and a Ph.D. in the sociology of religion from UC Santa Barbara.