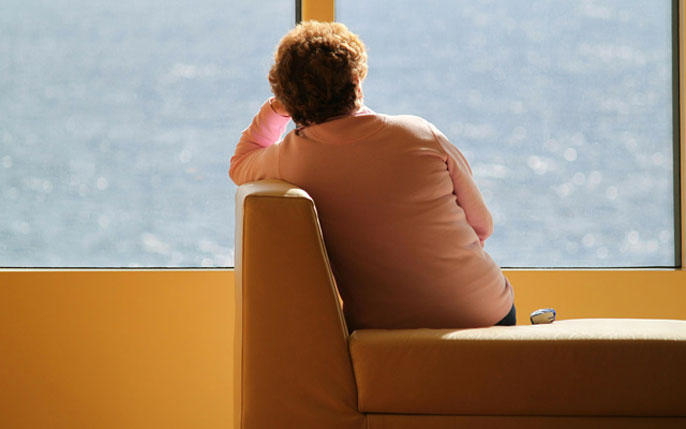 UC San Diego School of Medicine study finds loneliness is a heritable trait associated with neuroticism and depressive symptoms, but no one gene is responsible.

Loneliness is linked to poor physical and mental health, and is an even more accurate predictor of early death than obesity. To better understand who is at risk, researchers at the UC San Diego School of Medicine conducted the first genome-wide association study for loneliness — as a life-long trait, not a temporary state. They discovered that risk for feeling lonely is partially due to genetics, but environment plays a bigger role.

The study of more than 10,000 people, published September 15 by Neuropsychopharmacology, also found that genetic risk for loneliness is associated with neuroticism and depressive symptoms.

The research was led by Abraham Palmer, Ph.D., professor of psychiatry and vice chair for basic research at UC San Diego School of Medicine. In their paper, Palmer and team explain that just as physical pain alerts us to potential tissue damage and motivates us to take care of our physical bodies, loneliness — triggered by a discrepancy between an individual’s preferred and actual social relations — is part of a biological warning system that has evolved to alert us of threats or damage to our social bodies.

But not everyone perceives loneliness in the same way.

“For two people with the same number of close friends and family, one might see their social structure as adequate while the other doesn’t,” Palmer said. “And that’s what we mean by ‘genetic predisposition to loneliness’ — we want to know why, genetically speaking, one person is more likely than another to feel lonely, even in the same situation.”

The heritability of loneliness has been examined before, in twins and other studies of both children and adults. From these, researchers estimated that 37 to 55 percent of loneliness is determined by genetics. Previous studies also tried to pinpoint specific genes that contribute to loneliness, focusing on genes related to neurotransmitters, such as dopamine and serotonin, or other cellular systems associated with human attachment, such as oxytocin. But, Palmer said, these studies mostly relied on small sample sizes.

In their latest research, Palmer and team used a much larger sample size — they examined genetic and health information from 10,760 people aged 50 years and older that was collected by the Health and Retirement Study, a longitudinal study of health, retirement and aging sponsored by the National Institute on Aging at the National Institutes of Health. As part of this study, participants answered three well-established questions that measure loneliness. The survey doesn’t actually use the word “lonely,” as many people are reluctant to report feeling that way. Instead, the questions were:

The study accounted for gender, age and marital status, as married people tend to be less lonely than unmarried people.

Here’s what Palmer’s team found: Loneliness, the tendency to feel lonely over a lifetime, rather than just occasionally due to circumstance, is a modestly heritable trait — 14 to 27 percent genetic, as compared to the previous estimates of 37 to 55 percent. This new estimate of the genetic contribution to loneliness could be lower than previous estimates because Palmer’s team relied on chip heritability, a method that only captures common genetic variations and not rare genetic variation.

The researchers also determined that loneliness tends to be co-inherited with neuroticism (long-term negative emotional state) and a scale of depressive symptoms. Weaker evidence suggested links between heritable loneliness and schizophrenia, bipolar disorder and major depressive disorder. In contrast to previous studies, the researchers did not find loneliness to be associated with variations in specific candidate genes, such as those that encode dopamine or oxytocin.

According to Palmer, these results could differ from previous loneliness findings in part because the team exclusively surveyed older adults in the United States, whereas other research groups looked at young adults in Europe.

Palmer and team are now working to find a genetic predictor — a specific genetic variation that would allow researchers to gain additional insights into the molecular mechanisms that influence loneliness.