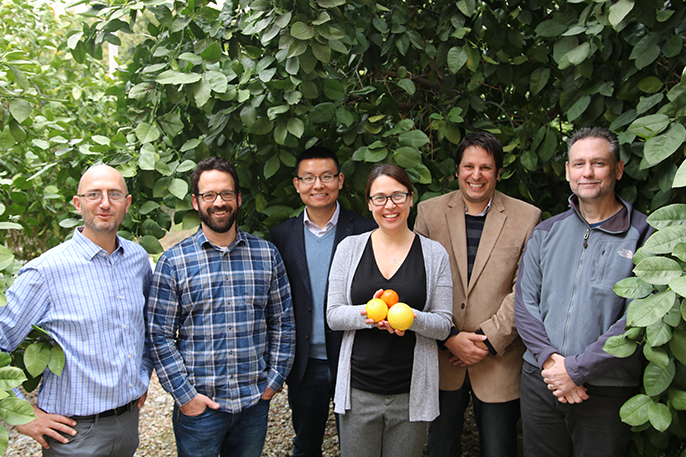 A team of scientists, led by a group at the University of California, Riverside, has received a five-year, $5.1 million grant from the U.S. Department of Agriculture to fight a disease that is devastating the citrus industry.

The team, led by Caroline Roper, an associate professor of plant pathology, will design and identify bactericides, which are chemicals that kill bacteria, to target Huanglongbing, a bacterial plant disease decimating citrus trees worldwide. They also will focus on better understanding the pathways those bactericides travel inside citrus trees.

Huanglongbing, which has devastated citrus trees in Asia and South America, was detected in Florida in 2005 and has since led to a 75 percent decline in the Florida’s $9 billion citrus industry. Fifteen U.S. States or territories are under full or partial quarantine due to the presence of the Asian citrus psyllid, an insect which feeds on citrus trees and – in doing so –  transmits Huanglongbing.

Past research has identified the bacterium (Candidatus Liberibacter asiaticus or CLas) associated with Huanglongbing that is killing citrus trees. But, it has proved difficult to deliver bactericides to the phloem, the part of the citrus tree where the harmful bacteria resides.

The UC Riverside team will analyze phloem transit routes that bactericides take when introduced through common application methods, such as trunk injection or leaf or root applications.

They also will continue to develop a new delivery system for use in field citrus trees. The delivery system targets the branches and petioles, which are the stalk that join a leaf to a stem. The idea is based on previous work that indicates that this is an effective and efficient way to tap into and introduce material into phloem tissue, a tissue that is hard to access.

They also will conduct fluorescent tracer experiments that map phloem transport pathways in citrus and harness that information to predict and test the routes that bactericides take when introduced. This will yield information about the routes bactericides travel when administered through delivery methods used by growers and the branch/petiole feeding technique.

The researchers will develop two classes of bactericides, the first based on mining anti-CLas compounds naturally produced by microbes that inhabit Huanglongbing survivor trees in Florida, and the second based on silver and sulfur nanoparticles.

The grant is one of four given by the U.S. Department of Agriculture’s National Institute of Food and Agriculture (NIFA) to combat Huanglongbing. The funding is made possible through NIFA’s Specialty Crop Research Initiative Citrus Disease Research and Extension Program, authorized by the 2014 Farm Bill.