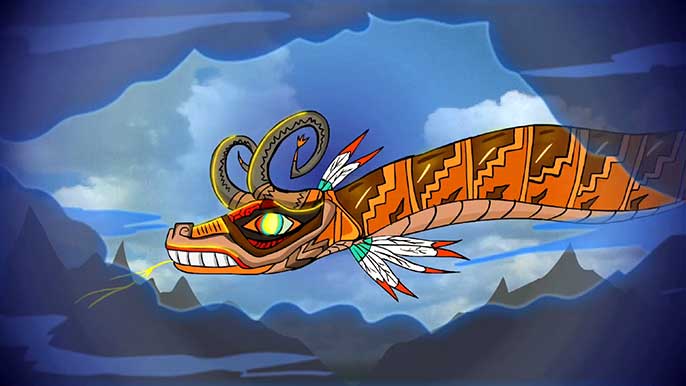 Leaños’s film is featured in a month-long series of original programming on PBS that will be available for online viewing, beginning today (Sept. 15).

"Frontera! Revolt and Rebellion on the Río Grande" is a wildly original look at the history of the deeply contested U.S.-Mexico borderlands.

The 20-minute film is a documentary animation chronicling the events leading to the 1680 Pueblo Revolt in what is now Arizona and New Mexico.

According to Leaños, Native Pueblo scholars cite this historical occurrence as the "First American Revolution," a moment when the Pueblo people orchestrated the unthinkable — an uprising by regional Indian tribes that successfully expelled their Spanish occupiers from the entire Rio Grande region, leading to an indigenous cultural and social renaissance.

“I merge the genres of animation and documentary to tell a story that has been largely ignored in the making of America's master narrative,” said Leaños. “I use colorful cartoons, rap music, and animated narrators to document a complex, multivocal history.”

“It is important for Native, Chicano, Latino, and other colonized communities to see these stories of triumph, struggle, and resistance in fresh and creative ways,” added Leaños.

“And it is especially important for us to learn alternative perspectives in history--ones that show us that transformation and change is possible through negotiation, communication and collective action."

Although Leaños wrote, directed, produced, and animated "Frontera!," he noted that the film is a collaboration between mestizo and Native American artists from California and New Mexico. Prominent scholars also served as consultants and script advisors on the project.

The film took four years to complete. The first two years were mainly spent on research and collaboration with Pueblo Indian leaders and Chicano artists about the story and its significance. Once in production, the animation took about a year to finish.

“It has an original score by Cristóbal Martínez (Alcalde), a member of the acclaimed Native artist collective, Post-Commodity,” said Leaños. “The rap song in the film was created by Deuce Eclipse, Greg Landau, and myself, and can be downloaded as an mp3,” he added.

The film has previously been screened at select Native and Latino film festivals, winning the "Best Short Film" Award at the XicanIndie Film Festival in Denver earlier this year. Leaños noted it also will be screened at the San Francisco Latino Film Festival, as well as play at several academic conferences presented by such groups as the American Anthropological Association (AAA) and the American Folklore Society.