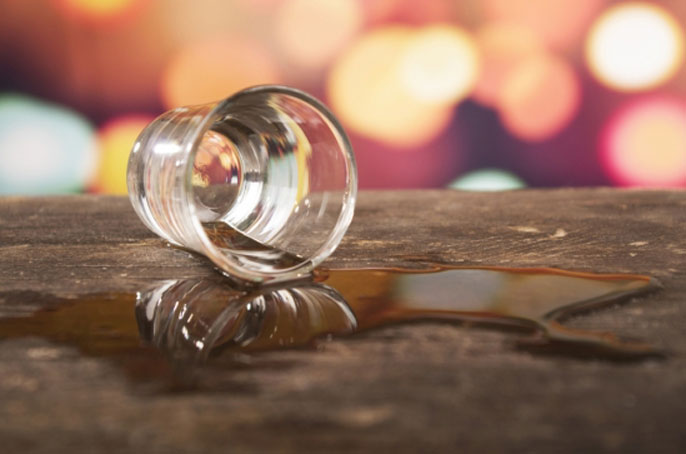 Why can some people stop drinking and others can't?

It's a common scene in bars and clubs: messy, falling-down drunk, slurring and incoherent, precariously close to catastrophe … and asking the bartender for another shot.

For the majority of us who imbibe, there is a certain point at which we stop pounding the drinks, and many reasons we do so. Maybe we sense that we’re close to our limit, or we notice we don’t feel as well — physically and emotionally — as we did a couple of glasses ago. And sometimes the sedative effects of the alcohol just take over. But for a certain subset of people, nothing — not the risk of losing control or the threat of nausea and dizziness — is enough to put the brakes on their drinking.

UC Santa Barbara neuroscientist Karen Szumlinski, who investigates binge drinking and the repeated stress of overdrinking on the brain, suggests a neurobiological mechanism might underpin this behavior. She and her team have uncovered a mechanism in a small brain structure called the bed nucleus of the stria terminalis (BNST) that helps sense alcohol’s negative effects and modulates the urge to drink. When it doesn’t function properly, however, we lose the ability to perceive when we’ve had enough — or, perhaps, one too many — and we continue to drink.

“If a little bit of intoxication is making you nervous, the BNST is doing its job,” said Szumlinski, a co-author of a paper that appears in The Journal of Neuroscience.

The urge for us to do virtually anything comes from signals that loop in and around our brains in areas that govern our perceptions, emotions and desires. These in turn connect to our motor functions and create behaviors. This process involves a complex set of signaling pathways, involving many neurotransmitters, as well as their associated proteins and receptors. Those examined in this study are specific to an area of the brain highly implicated in the interface between anxiety and motivation — the BNST, which is connected to, among other things, both the amygdala (which modulates fear and anxiety), and the nucleus accumbens (reward, aversion, motivation).

In previous studies, the researchers found that binge drinking elevates several aspects of signaling through the excitatory neurotransmitter glutamate in both the amygdala and the nucleus accumbens. Using a variety of experimental approaches, they also showed that this increased glutamate signaling drove excessive drinking. Along with the BNST, these regions form a subcircuit in the brain known as the extended amygdala.

“So in the amygdala the increased glutamate signaling is going to possibly generate negative emotions, and maybe you start feeling depressed or anxious, and then that will translate to a higher motivation to drink coming out of the nucleus accumbens,” Szumlinski said. Alcoholism — addiction in general — is a shifting target that moves between the motivation toward the “feel-good” effects of the drug and motivation to avoid the unpleasant withdrawal symptoms or to simply feel normal again after the dependency has been established.

The researchers initially presumed that because the BNST is connected to both structures, the function of high glutamate signaling in the BNST is similar to that of the nucleus accumbens and the amygdala. But instead they found it contains a “brake” mechanism, an adaptive response to limit alcohol consumption. And pumping that pedal is a scaffolding protein called Homer2.

As it turns out, Homer2’s effects on the amygdala and nucleus accumbens are opposite to those in the BNST.

“When we manipulated Homer2 (in mouse models) — when we knocked it down in the amygdala or the accumbens — the animals stopped binge drinking,” Szumlinski said. When they reduced the expression of Homer2 in the BNST, however, the animals binge drank more. And according to Szumlinski, a lot more.

“We know that the ability of Homer2 to interact with the glutamate receptors (mGlu5) can be regulated in a number of ways,” she continued. “And so we wanted to know: What other part(s) of the signaling pathway is interacting with Homer2, and how might that be contributing to the brake process in the BNST?”

They found their answer in an enzyme. Extracellular signal-regulated kinase (ERK, for short) is another of the usual suspects in the realm of addictive disorders. In a mouse model that carried a mutation in its mGlu5 receptors resulting in their inability to be activated by ERK, the researchers found that the mutation had an unexpectedly significant impact on alcohol preference and consumption.

“Based on the available biochemical information at the time we started testing the mGlu5 mutant mice, we predicted a minimal impact on any behavior,” Szumlinski said. The receptor still worked, it just wasn’t sensitive to ERK, she explained. “But there was a huge impact on drinking behavior in a direction opposite to what we predicted.” The mutant mice instead exhibited strong preferences for environments in which they experienced the effects of high-dose alcohol (doses that normal mice find aversive) and the mice consumed large amounts of high-dose alcohol under a number of different drinking procedures.

“So it really showed that something’s going on when you drink alcohol,” she said of this brake in the BNST. “You’re activating this enzyme ERK, which would normally phosphorylate the mGlu5 receptor, and help Homer2 bind better. All of this together serves as a brake to reduce or at least curb your alcohol consumption. But if any kink happens in that little bit of signaling there, you lose the brakes. Your brake line has been cut, and now you exhibit uncontrolled drinking behavior.”

Flying in the face of accepted notions

While all that is occurring in brain behaviorally, tampering with the BNST also seems to shut down or interfere with the typical aversive feedback that would normally prompt the drinker to stop — perhaps the nausea, dizziness, lack of control. Interestingly, Szumlinski added, messing with ERK-mGlu5 signaling also makes an animal overtly more drunk: compared to normal mice, the mGlu5 mutants studied lost their motor coordination on low doses of alcohol and they remained asleep longer when administered higher alcohol doses. Typical mice find increased alcohol sensitivity aversive. However, the mGlu5 mutants are falling-over drunk to observers, but they seem to interpret their situation as just fine.

It’s a jump to link the behavior of drunk lab mice and drunk people, noted Szumlinski, but there are connections that can be made in the array of complex brain processes that drive alcoholism.

“How we perceive how drunk we are is going to influence our subsequent drinking,” Szumlinski said. “Although their behavior is telling us they are completely intoxicated, maybe they don’t feel hammered. Or maybe when they’re feeling drunk, they don’t perceive that as a bad thing. Their awareness of their intoxicated state does not line up with their high-dose alcohol preference or their drinking behavior. And so presumably that might have something to do with BNST glutamate function.”

These results fly in the face of the widely accepted notion that one’s sensitivity to alcohol dictates their likelihood of drinking, Szumlinksi said.

“There’s a lot of literature, including lots of human data, that says if you are more sensitive to the intoxicating effects of alcohol, you are less likely to drink,” Szumlinski said. “We see this is in the genetic literature with people who have the various different enzyme mutations. Examples of these sensitivities are demonstrated in, among other reactions, the flushing, headaches or nasal congestion that happens for some people when they consume alcohol.

“This study says you can be incredibly sensitive to the intoxicating effects of alcohol, but that doesn’t necessarily feed back on you the way it should,” she continued. “And, presumably, the ability of that intoxication to signal to your body: ‘Hey, stop drinking,’ is somehow regulated by the BNST. The big questions now are: What is the identity of the neural circuit containing the BNST that allows the brakes to engage and how do ‘bad BNST brakes’ relate to Alcohol Use Disorder in the human condition?”