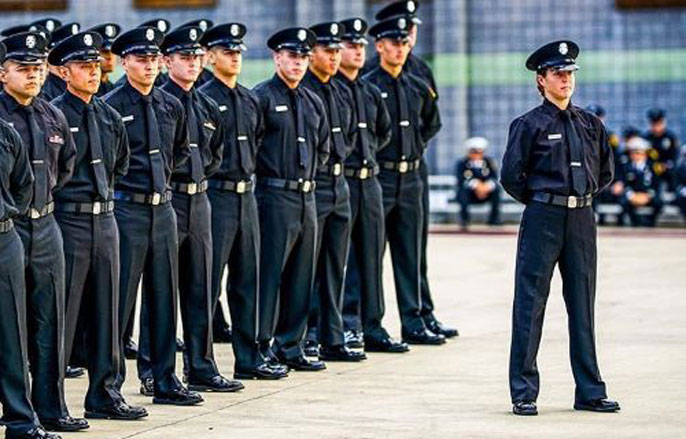 Caroline's "resiliency and desire to come back and then outshine everyone is truly a testament to her commitment to sacrifice and to putting in the effort, and also sets an example for more women to go into the fire service,” says Graham Everett, chief of staff for the Los Angeles Fire Department.

It had been a grueling 17 weeks of training, but Caroline Carpenter was on track to graduate from the Los Angeles Fire Department Academy — what recruits call “the Drill Tower” — when the unthinkable happened.

The 2013 Cowell College classical studies graduate had gotten high marks on skills like setting up 186-pound ladders and chopping holes into smoldering roofs when it came time for her last test. She was supposed to cut her way into a building using a heavy rotary saw. She fired up the tool and began to cut, realizing seconds into the maneuver that she’d forgotten to put on her safety glasses.

She quickly slipped on the protective eyewear but it wasn’t enough for the pass/fail test. She was kicked out of the program.

“It was literally the very last thing I could have done to fail out of the Tower,” says the 27-year-old from her home in Seal Beach, Calif.

But Carpenter was nothing if not tough. The same day she learned her fate, she got in her car and drove for an hour to another Drill Tower being held by the LA Fire Department and, after 20 more exhausting weeks there, she made history.

She became the first woman to graduate at the top of the Los Angeles Fire Department Academy.

“I don’t think a lot of people have done 37 continuous weeks in the Tower,” Carpenter says.

Carpenter grew up in Long Beach, the athletic daughter of two educators, and decided UC Santa Cruz with its ocean, forests, and rigorous classical studies program was for her. She joined the swim team, dove into her studies, and planned to go to graduate school. She was traveling along her life’s road map — until her senior year, when she discovered she was pregnant.

She was able to graduate a few months early and moved to Southern California, where her baby’s father lived. There, she gave birth to a son they named Charles Dewitt Carpenter-Castillo but who everyone simply calls Dewey.

She took care of her baby and her elderly grandfather, then worked as a seasonal lifeguard and as a teacher.

“Everybody wants me to say that I wanted to be a firefighter since I was a child, but that’s not true,” Carpenter says. “I decided firefighting was a good way to make it work down here for me.”

Not everybody believed she could do it.

Plenty of doubters thought a 5-foot-5, 130-pound, vegan woman wouldn’t survive the physically and emotionally tough Drill Tower to become a firefighter. In fact, many women don’t. Out of about 3,000 LA firefighters, only about 3 percent are women, although the department has pledged to raise that number to 5 percent in the next two years.

But the naysayers didn’t count on Carpenter’s determination and grit.

“The mentality I have when I’m doing something hard is, ‘Yeah, I can do this. It’s going to be a lot of work and it’s going to suck at times and my body is going to hurt and I’m going to be mentally fatigued, but I can do it,’” Carpenter says. “That mentality has carried me through a lot of things I’ve done in my life.”

‘Caroline really represents what we are all about’

Carpenter began a regimen of weightlifting and muscle building in addition to her running, cycling, and surfing. Once accepted into the Drill Tower, that fitness paid off.

She ran sprints up seven flights of stairs, did endless squats and pushups, and hauled ladders that weighed 50 more pounds than she did. Then came the mistake, and Carpenter had to start all over again.

“My body was pretty wrecked by the time I left the first Tower and entered the second,” she says.

But Carpenter kept at it and nabbed the top recruit spot with her skills and high scores — the first female to achieve that feat.

“Caroline really represents what we are all about,” says Graham Everett, chief of staff for the Los Angeles Fire Department, which covers 469 square miles of territory. “Her resiliency and desire to come back and then outshine everyone is truly a testament to her commitment to sacrifice and to putting in the effort, and also sets an example for more women to go into the fire service.”

Now serving a one-year probationary period as a firefighter, Carpenter is still garnering praise from her superiors and colleagues, according to Everett.

But Carpenter’s very first day on the job turned out to be a test of all her skills.

Called out for a fully involved structure fire, firefighters including Carpenter had to kick their way into the burning building after their rotary saw broke. Once inside, a section of ceiling fell onto Carpenter and a fellow firefighter and entangled them in a mess of wires as the fire raged and a call came in that part of the roof had collapsed.

Carpenter and her colleague managed to cut their way out of the wires and escape the building moments before its façade also crumbled and fell.

“Firefighting is inherently dangerous,” Carpenter says, “but to have experienced what I did that first day was pretty awesome and rewarding, and I learned a lot. I feel fortunate to be around a lot of people who are teaching me good habits.”

Says Everett: “We’re looking for great things from her.”