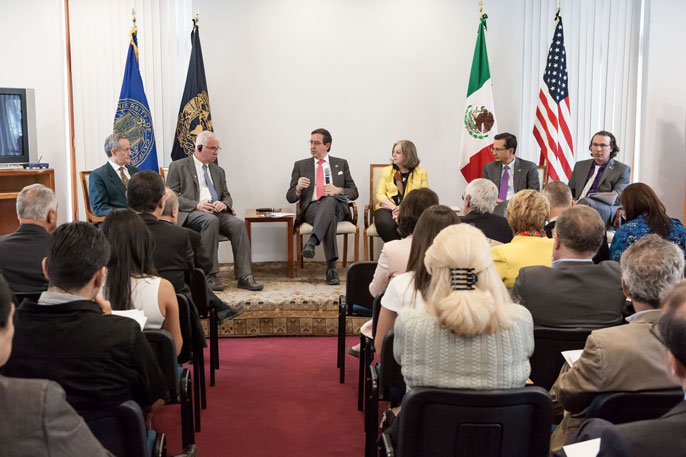 Distinguished academic and health leaders from Mexico and California met on March 29 in Mexico City to discuss health issues relevant to Mexico and the United States, with special attention to California, at the first Binational Health Forum. The forum is sponsored by the Health Working Group (GTS) of the University of California-Mexico Initiative.

Academics from the University of California, the largest public research university in the United States, and the Universidad Nacional Autonoma de Mexico (UNAM), the largest public university in Mexico, addressed health issues ranging from migration and violence to prevention of pandemics, diabetes and the portability of health insurance. "We believe a strategic collaboration with our partners in Mexico will not only improve the health of both of our populations, but also serve as a new model for binational cooperation," said UC President Janet Napolitano.

Dr. Enrique Graue, Rector of UNAM, agreed: "As universities, we must be an example of dialogue, negotiation, respect for the opinion of others and determination to reach agreements and consensus. Listening and understanding others, and even breaking down cultural barriers, seems to be the only way to reach a promising future."

"We want to demonstrate the strength of the ties that exist between Mexico and California and from this, prevent negative consequences that could arise from public policies that harm the health of the most vulnerable populations," said Dr. Jaime Sepulveda, executive director of Global Health Sciences at the University of California, San Francisco and co-director of the Health Working Group.

The 57 million Latinos living in the United States are the nation’s largest minority group, representing approximately 17.6 percent of the total population. The majority of Latinos resides in California and 64 percent are of Mexican origin. Mexicans are among the most vulnerable groups in the U.S. in terms of access to health care due to their precarious socioeconomic situation and, in some cases, migratory status.

"To effectively address the needs of the Mexican population, and to facilitate the creation of appropriate public health care policies, it is essential to work cooperatively to understand the factors that contribute to the barriers that affect their health status," said Dr. Stefano Bertozzi, dean of the UC Berkeley School of Public Health and co-director of the Health Working Group. "In this regard, collaboration among UNAM, CONACYT and the University of California is strategic for the scientific and technological advancement of the region."

UC President Janet Napolitano and UNAM Rector Graue signed a cooperative agreement in July 2016 to work cooperatively on health and other issues of the UC-Mexico Initiative.

Napolitano created the UC-Mexico Initiative in 2014 to develop a sustained, strategic and equal partnership between UC and institutions in Mexico to address common issues and educate the next generation of leaders. It provides an opportunity to think broadly and to develop strategies for a robust and enduring relationship that encompasses student and faculty exchanges, celebration of shared heritage and populations, and research and scholarly activity that solves problems and advances knowledge on issues of mutual importance. The Initiative focuses on key program areas of interest to both California and Mexico, as well as the United States: arts and cultures, education, energy, environment and health.

Also during President Napolitano’s visit to Mexico City, she met with government, education and business leaders to reaffirm and strengthen UC’s collaborations with Mexican institutions on issues such as energy, the environment and education.