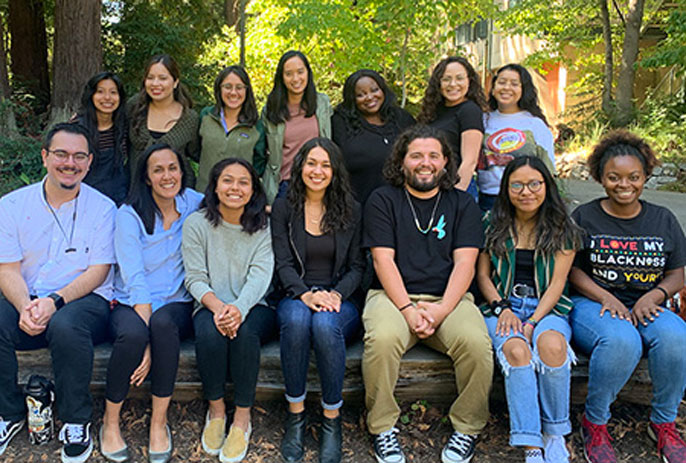 When you search online for 'family achievement guilt', the first five results all contain the same author's name: Rebecca Covarrubias.

An associate professor of psychology at UC Santa Cruz, Covarrubias is a prominent figure in research about students who are the first in their family to attend college and about the built-in obstacles they must overcome to graduate.

"Universities developed a predominantly white, American, and middle-to-upper middle class culture," says Megan Robbins, an associate professor of psychology at UC Riverside who is a friend and former colleague. "Covarrubias is doing groundbreaking work, demonstrating with scientific evidence that this imposed culture doesn't fit for everyone."

Family achievement guilt is the emotion that arises from gaining access to more resources than family members or causing familial sacrifice to support higher education. The difficulties of navigating a university system built for one type of student can challenge first-generation students as they strive to achieve their academic potential. Getting the vibe that they're not welcome or their culture isn't valued can stunt their ability to learn.

"It's the implicit things, the things that make you feel funny in a classroom but you don't know why," Covarrubias says.

A social psychologist, Covarrubias leads several research projects to foster more equitable educational opportunities for first-generation, low-income, and students of color. Her team is creating a more precise dictionary for describing students' emotional experiences and working with faculty members to alleviate students’ guilt and inequities. The goal is to address the spoken and unspoken elements in a classroom that can deter underrepresented students from graduating.

For example, using community-oriented phrasing (“we”) instead of individualistic words (“you”) in campus communications can make a difference, she says. Her research has shown that revising campus messaging to include "we" language can help first-generation students of color feel less guilt for leaving their families behind.

Covarrubias also stresses the importance of recognizing that some students are unfamiliar with campus resources that others take for granted. Not explaining how office hours work or that they're available to all students presupposes that everyone knows how to take advantage of this assistance. "Naming these things is work towards equity," she says.

Covarrubias was raised with a steadfast respect for rules and loved being a good student. She grew up in a low income area near downtown Phoenix, Arizona, but it had everything she needed and more. Her neighborhood was filled with a strong sense of community, parks safe for all ages, and a library two blocks away from her house.

"It was an under-resourced neighborhood when I was growing up, but it had so many strengths as a community,” she says. “It wasn't until years later that I fully appreciated all of its riches."

The library in particular became a special place. Reading programs, with trinkets for prizes, piqued her interest and turned Covarrubias into a regular.

Covarrubias’ mother raised four kids in a two-bedroom home and took care of everything around the house. Her father, a school bus driver and landscaper, was the spark who kept everyone entertained and laughing. He was also known as a legendary storyteller, instilling in Covarrubias the importance of an engaging narrative. Later in life, when the fear of presenting her work to large groups challenged her reserved nature, she remembered her father’s tales and discovered her ability to tell a compelling story.

The overflowing familial and community support during Covarrubias’ early years gave her the confidence to excel in class. "She was bright and challenged each of her classmates to do better," recalls her middle school math teacher, Lily Wong. "She was one of those students that, as a teacher, you wish you had a whole classroom of them."

Near the end of middle school, teachers encouraged Covarrubias to take an assessment exam for a high school that offered a rigorous International Baccalaureate program. She was selected and excelled in the coursework, but for the first time, she realized that not all of her peers grew up in a neighborhood like hers, with bilingual parents who had to work hard to put food on the table.

"There were a lot of wealthy, white students,” she says. “I remember thinking for the first time, 'Am I smart enough?'"

This newfound hyperawareness of inequity followed Covarrubias to college at the University of Arizona in Tucson. On its desert oasis-like campus with swaying palm trees and wealth splashed around, Covarrubias felt out of place. "No one came up to me and said I didn't belong there," she says, but she didn't see anyone who looked like her or seemed to come from a low-income background.

It was also her first time away from home. No one in her family had ever moved away for college, and she felt guilty about leaving everyone behind while she got to experience the nearly endless opportunities on campus.

Like most incoming freshmen, Covarrubias decided to live on-campus her first year. But getting used to having a large room shared with only one other student took some time. "I grew up with a big family, so I got used to sharing space with a lot of people," she says. Slowly, Covarrubias adjusted and found ways to make the room feel like her own with a childhood diary and family photos.

One thing that remained missing — an item found in nearly every other student's room — was a computer. Covarrubias didn’t want to ask her family to buy her new, crisp sheets for her extra-long college dorm room bed, let alone expensive electronics. Instead, she typed homework assignments at the campus computer lab or borrowed her roommate's laptop when it wasn't being used. This sometimes meant her school work had to wait until the middle of the night while her roommate slept.

Months into her first year, Covarrubias received a call from Mrs. Wong. An extra computer, still in perfect working order, sat unused in her middle school classroom. Later that week, Mrs. Wong drove nearly two hours to Tucson to deliver the computer to her dorm room.

As part of her family studies major, Covarrubias took an introductory psychology course that revealed a way for her to describe the emotions she had been experiencing since high school.

"I learned that research allows us to understand a framework and use tools to name it, study it, and do something about it," she says.

In her third year at University of Arizona, Covarrubias entered the federally-funded Ronald E. McNair Achievement Program, which is designed to accelerate the path of first-generation and low income students towards doctoral work. For the first time, Covarrubias met other college students with similar backgrounds and interests, and she got involved in research that felt powerfully rewarding.

Her team investigated stereotyping of Indigenous children in elementary and middle schools. This work exposed Covarrubias to the idea that a teacher or educational setting could influence a student's ability and motivation.

"That's what felt most eye opening,” she says. “These social and cultural cues tell you very strongly whether you'll do well or you belong in a particular place.”

These personal realizations led Covarrubias to pursue a Ph.D. at the University of Arizona in social and cultural psychology. The guilt that she had experienced as an undergraduate, which only intensified with her decision to enter a graduate program, became a focus of her research. She and her advisor, Stephanie Fryberg, surveyed 300 college students about their emotions related to college achievement and their families' lack of opportunities. The researchers found that first-generation students reported feeling more guilt than students whose parents had attended college did; Latino students were particularly affected. The results led Covarrubias and Fryberg to coin the term 'family achievement guilt' to explain the students’ emotional strife.

A second study identified ways to alleviate that guilt. When participants were asked to reflect on a time when they helped a family member with a problem, then answered the same questions about their emotions surrounding college, they tended to report less intense family achievement guilt. By encouraging first-generation students to share family stories, faculty members could ease the students’ burden and affirm their place in the academic system, Covarrubias says.

Despite earning a Ph.D., Covarrubias struggled to see herself in academia. She didn't have many role models in faculty positions and was put off by the "publish or perish" culture. But when UC Santa Cruz offered Covarrubias the opportunity to translate her research into practice, she took a calculated leap of faith.

"They said, 'Come as you are,'” she says. “I didn't have to prioritize certain pieces. All of me and my work was valued.”

Ibette Valle says when she first read Covarrubias’ 2015 study on family achievement guilt as an undergraduate, she felt "fiery" inside. Also a low-income first-generation student and McNair scholar, Valle immediately connected with the theories and newly-defined terms in the paper.

"She was doing research on something I had experienced but could never name," Valle says. This spark inspired her to apply for a position in Covarrubias' lab.

Now a graduate student working with Covarrubias, Valle is helping a local high school prepare first-generation and low-income students for college culture. Other students under Covarrubias' guidance are testing a new way to communicate with students who are on academic probation. To replace the cold-sounding email that's used today, the researchers are experimenting with a warmer tone that implies a sense of understanding and sensitivity towards adversity.

Covarrubias recounts a time shortly after she began teaching at UC Santa Cruz that captured the essence of her work. Her team held a workshop for first-year, first-generation students of color to discuss their transition to college and solicit feedback for staff and faculty. One student wrote, "We just want you to have more compassion, we want you to know who we are, we want you to care about us." The advice resonated so much with Covarrubias’ own experiences that she memorized it. Those words, she feels, convey the most critical way educators can help students succeed.

"It's simple,” she says. “They're asking for connection."