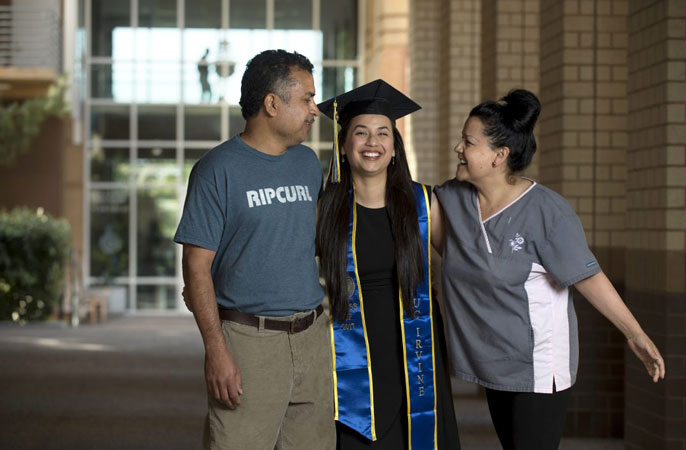 Once an insecure first-generation student at UC Irvine, Daniela Estrada is now a confident Fulbright and Truman scholar headed to law school. Here, the soon-to-graduate senior is flanked by her proud parents, Flavio and Estela Estrada.

By age 8, Flavio Estrada was picking tobacco in the fields of Mexico. He yearned to join the other little boys and girls going to school, but his family couldn’t afford it. He never got the chance. Fast-forward 46 years: His daughter Daniela, a UC Irvine political science major, will graduate this June with high honors and has been named a Fulbright and a Truman scholar.

“I’m extremely proud of my daughter and all her accomplishments. I know she’s not stopping here. She has dreams that are even bigger than this,” says Estrada, 54, who today works 60-hour weeks as a cook in Orange County. He has ceaselessly urged his children to seek education: “I always tell them, ‘Your mother and me, we have struggled, and we have put our bodies to work. Be smart; use your mind.”

Daniela Estrada, 22, says her father’s words and both her parents’ hard labor have provided powerful motivation. Combined with an array of mentoring and other resources offered by UC Irvine, it has put her on track to achieve what was once a “faraway dream” to be a lawyer.

She is one of many people thrilled that UC Irvine has been designated a Hispanic-serving institution by the U.S. Department of Education for 2017-18. That means fully one-quarter of undergraduates identify as Latino, and half of all students are recipients of financial aid.

The classification opens up possible federal grants for tuition assistance, facility improvements and critical programs for everyone on campus.

“It’s incredible, and it’s very well-deserved for UC Irvine, which has done so much for first-generation students like me,” says Estrada, whose parents both emigrated from Mexico and became U.S. citizens via President Ronald Reagan’s amnesty process.

Douglas Haynes, UC Irvine vice provost for academic equity, diversity and inclusion, says of the campus’s diversity: “As a public institution, our undergraduates reflect the community. When you see UC Irvine, you see California as it is today.”

Half of all undergraduates here now are the first in their families to attend college. Current Hispanic enrollment is 25.7 percent, double what it was a decade ago, and UC Irvine received more Chicano/Latino freshman applications for next fall than any other UC campus.

The major growth in Hispanic enrollment at UC Irvine is the result of a concerted effort, including years of structured help for high school students across the region on which courses to take and the college application process. On campus, there are dozens of scholarship, internship, mentorship and leadership development programs.

Estrada transferred from Golden West College to UC Irvine as a junior. She loved the campus’s big, beautiful buildings and friendly people but was intimidated. Estrada had felt that before as the youngest child of working poor parents in a coastal resort town. She was stunned when she went to friends’ large homes to study and could see the surprise in their faces when they came to her family’s rented apartment.

Orange County’s demographics have shifted markedly: More than half of all residents now are nonwhite, according to recent census figures. “There are a lot of Hispanics in Garden Grove, Anaheim, Santa Ana — and Vietnamese,” Estrada notes. “We’re a big population of first-generation immigrants, and we’re a big part of Orange County too.”

Her father arrived in the U.S. seeking work at 14 and has been a cook at Huntington Beach’s popular Sugar Shack Café for decades. Her mother, Estela Estrada, does laundry at an assisted-living facility.

She brought their work habits with her to college. Estrada was holding down three part-time jobs and an unpaid internship — while attending classes full time — when Mark Petracca, UC Irvine associate dean of social sciences, stepped in. For Estrada, the schedule was normal. But Petracca noticed that she seemed stressed-out. When she described her packed days, he told her, “That’s appalling. You can’t have that many jobs and go to college.”

With his guidance, she traded her low-wage clothing store job for a paid summer research fellowship that opened up myriad opportunities on campus and beyond.

“Like many students, I saw in her the kind of heart for the sort of work that she wants to do, and frankly, I pushed her,” Petracca says.

This July, Estrada flies to Colombia to begin her Fulbright project, teaching English in the nation’s capital. When she returns, she plans to attend law school and become a public defender to help indigent people accused of crimes. She was the only University of California student — and one of just two Californians — selected last year for the prestigious $30,000 Truman Scholarship, awarded for graduate studies related to public service.

‘You can do this’

Estrada’s path wasn’t easy. Many first-generation college students experience loneliness and self-doubt, and motivation and grades can suffer the first semester, according to published research. Quick intervention can make the difference. In her case, the SAGE Scholars Program provided friendships, counseling and invaluable support.

“I had this faraway dream of wanting to be an attorney. It seemed impossible. A classmate told me about a clerk job at a law firm, but I was so intimidated,” she recalls. Estrada explained to the SAGE director that she wanted to apply but had nothing to offer. He set her straight. “You can do this,” he said — and then coached her through preparing a resume.

She landed the job and went on to intern with both the county district attorney’s office and UC Irvine’s Saturday Academy of Law, showing Santa Ana high school students that legal careers are possible. The experiences confirmed that law is her true calling. The profession offers prestige and decent pay, Estrada says, “but beyond that, I really like it.”

While others groan about casework and court time, she’s entranced.

“There’s a lot of inequality in our criminal justice system, and I want to help change that,” she says. “It wasn’t until I transferred to UC Irvine that I realized my dreams were achievable. Today there’s no doubt in my mind that I am capable of going to law school.”

Estrada’s entire family is overjoyed. “Oh, my God, I’m going to have a lawyer daughter,” her mother exclaims. “It’s truly a profound honor.”

Her older sister Vanessa, who’s working and plans to attend Cal State Long Beach, says she couldn’t be prouder of her little sister: “Her goals haven’t been reached because of luck, but because of hard work and determination — and also networking, reaching out for the right resources and being able to find them.”

Stanford University data published this year shows that UC Irvine is one of the top four colleges in the nation whose students experience huge income growth after graduation. Anita Casavantes Bradford, UC Irvine associate professor of Chicano/Latino studies, says that Estrada’s transformational journey reflects a key role played by the University of California and other colleges: as engines of social mobility that educate a workforce and create critical thinkers to play key roles in a democracy.

“It’s important that students who are smart and committed get a chance to come to universities … to learn to make arguments, to clarify their thinking and their values,” she says. “It’s not just about making a living, but about sitting on school boards, seeking public office, and making policy and law.”