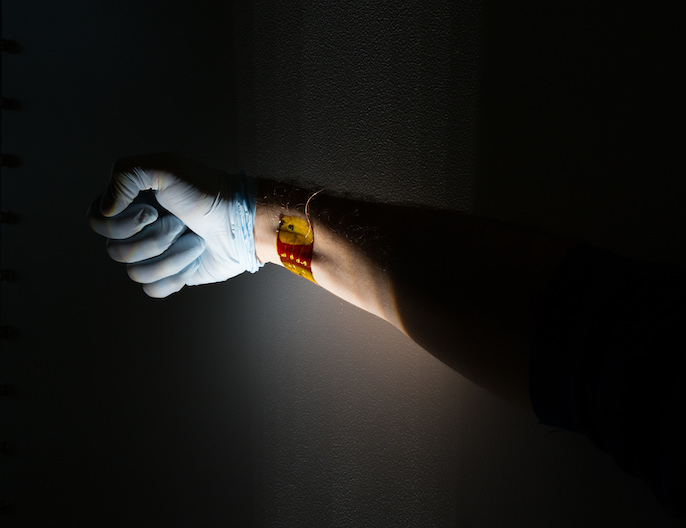 UC San Diego researchers crumpled a wrist-sized band of solar cells 1,000 times before using it to power a watch.

On a recent warm day in San Diego, Timothy O’Connor wrapped a Band-Aid-sized strip of solar cells around his wrist and walked outside into the sunshine. He plunged his fingers between his wrist and the solar strip and repeatedly twisted and crumpled the solar cells. He repeated the motion 1,000 times.

O’Connor then plugged the strip into his digital watch, powered it on, and watched as the clock turned from 12:00 to 12:01. Everything was fully functioning.

O’Connor, a UC San Diego nanoengineering student, is part of a group of innovators working to build devices that are both beneficial to mankind and fit seamlessly – in fact, comfortably – into the human experience.

“As our technology grows and grows with us and becomes more integrated with every bit of our life we notice there are huge differences between us and our devices,” said O’Connor.

O’Connor and associate professor Darren Lipomi, who have worked together since the Lipomi Research Group’s inception four years ago, are focused on creating “materials that are both stretchable and mechanically active.” That includes products ranging from solar-powered “wearables” to gloves that can electronically translate sign language.

While speaking passionately about issues such as energy independence and democratization, O’Connor said his main focus is on a new generation of solar cells that are stretchable, flexible, durable and wearable. His research won a best poster award from a pool of 215 this spring at UC San Diego’s Research Expo 2016.

A new twist on solar cells

Making a flexible and wearable solar cell required an elegantly subtle design tweak at the molecular level. Instead of using the industry standard semiconducting polymer P3HT, the Lipomi lab substituted a related polymer, P3HpT. The difference-maker for significantly better elasticity without significant losses in efficiency? One carbon atom.

“In hindsight it’s simple, but no one knew that,” O’Connor said. “P3HT has been pushed as durable for a long time, but it’s brittle and cracks at less than five percent compression.”

O’Connor described the new technology as “moderately efficient but dirt cheap” to mass produce. “You can print the solar cells out and put them everywhere,” he said.

Organic photovoltaic technology has progressed to where solar cells can now be printed like newspapers, rolled up on spindles, and worn on clothes, Lipomi said.

“There are people in the world who already have the resources to produce a kilometer of printed photovoltaic materials,” he said. “Groups like that are much closer to producing a product like that than we are.”

Lipomi sees opportunity in niche products that can be commercialized in the next 10 years: solar tarps deployed as energy sources in the wake of natural disasters, or power-producing tent rain tarps sold at retailers such as REI. When it comes to high-tech outdoor gadgets, he noted, U.S. consumers show a willingness to dig deep into their wallets.

Both Lipomi and O’Connor share a history of supplementing their research with business knowledge.

While working on his postdoc at Stanford University, Lipomi covertly completed the Program in Innovation and Entrepreneurship, regarded as a “mini-MBA.” As an undergraduate at Bowling Green University, O’Connor studied business and economics.

An advocate for better training of faculty on entrepreneurial issues, Lipomi said the research group’s first goal is to build a body of knowledge that can help solve future thermodynamic problems with organic semiconductors. Another major near-term goal, he added, is to make devices for which commercialization is inevitable.

“Because students are very interested in it, especially in engineering departments and especially in California where people in health care and energy are forming companies to change the world,” he said.

In the next two years O’Connor plans to lay the groundwork for a scalable, fundable business featuring the durable solar cell technology.

As the leading UC campus for startups, UC San Diego features a number of accelerators and entrepreneurial programs. Just this month, it launched the Institute for the Global Entrepreneur – a collaboration between the Jacobs School of Engineering (where O’Connor is working toward his doctorate) and the Rady School of Management. Its goal: to train engineering leaders and translate university discoveries to the marketplace.