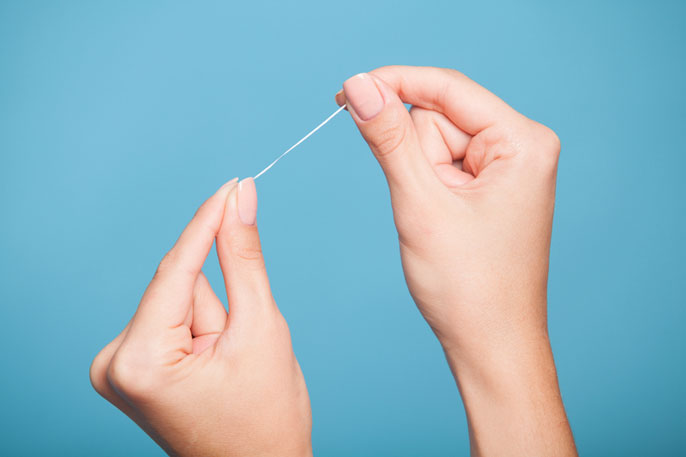 To floss or not to floss, that is suddenly the question.

For decades, the federal government and dentists have recommended flossing daily to prevent cavities and gum disease.

Now the evidence for flossing appears to be hanging by a string.

The Associated Press announced this week that its investigation of 25 studies on flossing found the data supporting its benefits to be “weak, very unreliable,” while also noting that the federal government’s new dietary guidelines have quietly removed any mention of flossing.

If you’re smiling about the news — a recent study found that nearly one-third of American adults never floss — hold on.

Should you still floss? Yes, say experts from the University of California’s two dental schools.

“The dental profession is behind flossing 100 percent,” said Dr. Paulo Camargo, associate dean of clinical dental sciences and the Tarrson Family Endowed Chair of Periodontics at the UCLA School of Dentistry. “It’s a preventive measure that’s common sense. The cost of telling people not to floss would be a lot higher in terms of exposure to bacteria that can cause cavities and gum disease.”

Dr. Mark Ryder, chair of the Division of Periodontology at the UCSF School of Dentistry, agrees.

“You need a way to remove those soft deposits that accumulate between the teeth,” Ryder said. “If you throw away your floss and don’t do anything else to clean between your teeth, you’re leaving problems behind.”

The case for flossing

Why floss? Blame plaque, an almost invisible film of bacteria that collects all around your teeth and is associated with cavities and gum disease.

A toothbrush doesn’t remove bacteria from the spaces between teeth, Camargo said.

“That in itself is a recommendation for flossing,” he said, noting that flossing is a low-cost way to decrease risk for developing oral diseases.

If the evidence for flossing seems shaky, that’s likely because the studies have followed people for a short period of time — some for only two weeks — rather than years, Camargo said.

“It’s not enough time for periodontal problems to develop,” Camargo said. “In order to evaluate the effect of flossing on the onset and progression of periodontal disease, a prospective study would require that a group of people did not floss for a few years. Ethically, you can’t do that type of study.”

The two leading professional groups — the American Dental Association and the American Academy of Periodontology, for specialists in gum disease and implants — both issued statements this week reiterating the importance of flossing daily, along with brushing twice a day and regular dental visits.

Maintaining good oral health isn’t just about protecting your pearly whites. Oral health is strongly linked to overall health: Bacteria in dental plaque and inflammation from periodontal diseases can spread to other parts of the body, Ryder said. There is some evidence that maintaining oral health may lower the risk of heart disease, stroke, pneumonia and possibly dementia and Alzheimer’s, he said.

If you don’t like flossing — or find it too difficult — there are alternatives, Ryder said. Interproximal brushes — mini brushes affixed to a handle — have been shown in several studies to be even more effective than flossing and easier to use, he said.

Other options, such as plastic or rubber tips, wooden wedges, and even toothpicks, also may be effective, Ryder said.

“Flossing consistently and correctly is a challenge for many patients,” Ryder said. “Each dentist needs to see what can their patient do — do they have the dexterity and motivation to floss correctly? If not, they should recommend alternatives to help patients clean these harder-to-reach deposits between the teeth.”

When you floss, wrap the string around each tooth and move the floss from the gum upwards, Ryder said. “Don’t saw back and forth like a lumberjack sawing a log — that’s probably just cutting into the gum.”

“It’s a personal preference,” Camargo said. “Any floss can do the job. How you do it is more important than what you use. The idea is to disrupt the bacteria on a daily basis so they don’t accumulate to the point where they cause disease.”

As dentists like to say about teeth: “You only brush and floss the ones you want to keep.”