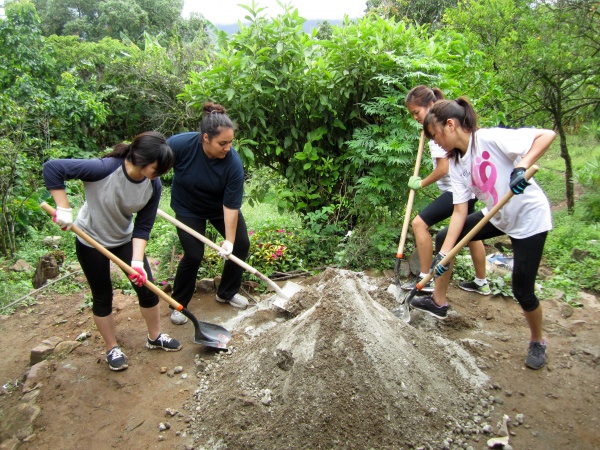 Two years ago, UC Irvine undergraduate Jessica Nguyen wasn’t sure what she wanted to do with her life. “I had no idea. I didn’t even have a major,” she says. “Then I went to a Global Brigades information session on campus. Once I learned about what they did, I was on board.”

Global Brigades is an international network of university students who travel abroad to help communities in need. Each year, hundreds of volunteers visit villages in Ghana, Honduras, Nicaragua and Panama, where they work with locals on health and economic development projects.

Since 2007, UC Irvine’s involvement in the nonprofit organization has grown to about 140 active members and six chapters: dental, environmental, medical, microfinance, public health and water. In transforming communities, students such as Nguyen often find themselves transformed.

“It’s hard to explain how much Global Brigades changes your life,” she says. A fourth-year biological sciences major, she’s now the organization’s campus chair and hopes to join its staff in the field after graduating next June.

“It opens your eyes to how happy they are with what they have,” Nguyen says. “Here in the U.S., we all have the latest technology, and we’re still not happy. We always want more, more, more.”

The experience is also many students’ introduction to heavy labor, such as working alongside residents to lay a concrete floor or dig a hole for a latrine.

“I just wanted to do something over the summer that would impact someone’s life, something that would affect a community,” says Ginelle Guckenburg, a third-year public health sciences major and Global Brigades executive board member.

She, Nguyen and about 25 other UC Irvine students traveled to El Jute, Honduras, with the public health brigade, which makes home improvements that help prevent common afflictions such as Chagas’ disease, spread by dirt-dwelling insects.

They stayed in a Global Brigades compound, sleeping in bunk beds and driving two hours a day over dirt roads to the remote farm village.

“The area was completely impoverished,” Guckenburg says. “Most of the houses were brick or adobe with dirt floors and no bathrooms. The people were very grateful we were there.”

“I didn’t expect to work that hard, but it felt good to make something with the community that will last a long time,” she says. “You’re literally standing next to the person you’re building this for, and you just get moved by that. In one house, there was a single father with a 5-year-old boy. Just the fact that he was there, participating and enthusiastic, motivated us.”

“It was a humbling experience,” says Omid Taheri, a fourth-year biomedical engineering student and global medical brigade president. “To see people’s faces light up as we handed them their prescriptions, and to be showered with hugs and smiles from adults and children alike — that alone made the trip and every minute we spent down in Honduras worth it.”

For many students, the best part about Global Brigades is interacting with the indigenous people. They interview them to determine their needs, play with their children and listen to their stories.

Suvini Jayasekera, a fourth-year biological sciences major, went on her first trip with UC Irvine’s medical brigade during her freshman year. “Growing up, I’ve always wanted to help poor communities,” she says. “I lived in Sri Lanka until I was 7. My mother is a single parent. I understand what it’s like to struggle, because I saw it when I was little.”

Jayasekera started UC Irvine’s microfinance brigade in fall 2012 because she wanted to be more involved in locals’ day-to-day lives. “Our goal is to help them escape poverty,” she says.

In June, Jayasekera and eight other chapter members traveled to Guaricayan, Honduras, where Global Brigades has established a community-run bank to spur economic growth.

The students led workshops on finances and banking and helped residents develop a business plan for a chicken-packing business They went from house to house conducting market research, interviewing people about their poultry-buying habits to make sure there was demand for the product. “We even got to go to a chicken farm,” Jayasekera says.

She hopes to become a cardiologist and says that Global Brigades has inspired her to someday work with Doctors Without Borders and start a nonprofit of her own: an orphanage in Sri Lanka.

After returning from a Global Brigades trip, students often continue to find ways to help in communities that have few resources; they miss the simpler life, and the camaraderie, they experienced abroad.

“When you come back, it feels weird,” Guckenburg says. “While you’re there, you don’t rely on any technology – no cellphones, no Internet. You’re talking to people and connecting on a real level. Everyone gets super close, almost like family.”

“Here, you try to hold on to how you felt when you didn’t need all of that stuff,” she adds. “You don’t want to forget it.”